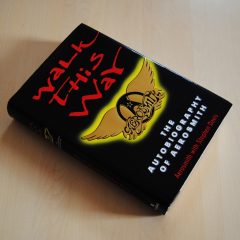 I know the story of Aerosmith. I’ve read the articles, seen the videos, and listened to the interviews. Heck I even read this book, back in junior high on a technicality because the teacher said Arrowsmith, but I read this instead.

But rereading this book again, I have a new appreciation for their story, their struggle, and their triumph. I also found myself in awe of the formatting of this “autobiography” about the band.

Let’s start with that. It’s basically a “chat” format. Stories are told directly from the members of the band and their wives, agents, managers, and roadies. There are some descriptive passages written by co-author Stephen Davis, which help set the era or environment, but otherwise, it is their story in their own words.

And the newfound appreciation? That comes from age, pure and simple. Sure, I knew of substance abuse, fame, and rock ‘n’ roll back in junior high. But the struggle they describe can be attributed to more than just substance abuse, as can the trials and tribulations they endured.

So, why then, did I even pick this book up to reread it? Well, for one thing, Chris Maier (co-host of Our Liner Notes) and I plan on doing a deep dive episode on Aerosmith. So what better source could there be than these guys in their own words and second, that first time around was almost 20 years ago.

Now when I read this, I knew what was coming, but to hear them describe it in their own words added some perspective that I wouldn’t have had as a teen. 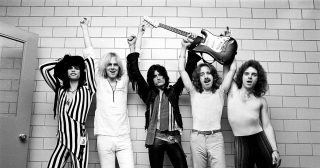 Aerosmith in the early days

As I’ve stated on the aforementioned Our Liner Notes, particularly the episode about my first concert (which was Aerosmith on the Nine Lives Tour), and on my Mixed Tape episode, I love this band. It was the band I listened to while mowing lawns to get more of the back catalog. And in doing so, became the first band I’ve ever collected the entire back catalog for.

But enough about me. This book is a great read. These guys are natural storytellers. It helps immensely that there were people around the non-sober band to relay some of those stories from the “messed-up” years when the drugs and alcohol ran rampant.

“Are You Experienced? No, but I wanted to be. Timothy Leary was saying, ‘Turn on, tune in, drop out,’ so eventually I wanted some pot to see what it was like. It was just something you had to experiment with. I never went for the dropout part. I thought that was for losers. I didn’t think you had to give the finger to everything in life.” – Tom Hamilton

But despite his haze, or because of it, Steven Tyler has the best quotes about those days.

“It started from a single premise: ‘Rock till I drop.’” – Steven Tyler

“We believed that anything worth doing was worth overdoing.” – Steven Tyler

“We call them “the wonder years” because we wonder what happened to them.” – Steven Tyler referring to the mid-to-late seventies.

“I’m getting tired of recovery stories. But I could now actually hear us getting sober on the albums. You could chart the whole story from the musical differences when we started, when we started using a little, when we were using, then we first got sober, then Pump.” – Steven Tyler 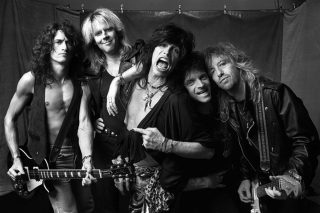 “There’s more. The two years between Get a Grip and Nine Lives were unlike any that had gone before. Just when you think you’ve got it down, all the rules change. Two more years in the Life. And we weren’t the same people coming out of it that we were going into it.” – Joe Perry

The book also shows you a side of the band that laments the progression (or regression depending on your point of view) of the music industry, not just rock ‘n’ roll. To quote Mr. Brad Whitford, “Before MTV, there was amazing mystery in rock ‘n’ roll: You had to go see a band to find out what they actually looked like. A lot of that mystery is gone. If you think about it, it was a terrible thing to have lost.”

Even the press clippings from the book talk of the same kind of thing, “Rolling Stone gave Get Your Wings a good review. [‘Maintaining an agile balance between Yardbirds- and Who-styled rock and seventies heavy metal, Aerosmith’s second album surges with pent-up fury . . . They think 1966 and play 1974, something which a lot of groups would like to boast.’]”

The bottom line is that this book is the definitive story of Aerosmith as told by Aerosmith. However, the one story that is most informative about what Aerosmith means to fans and the generation of rock that it helped to usher in, as that bridge from those who inspired five guys from Boston to take over the world, comes from Slash. 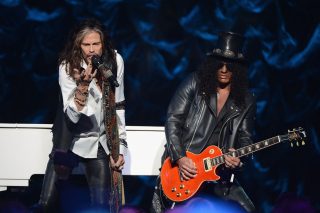 “I was in seventh grade and just going through the whole 1978 music thing that was happening for kids–which was like Cheap Trick and the Cars. Anyway, there was this chick that I was going after that was considerably older than me, and she was pretty hot. And I’d been trying to be cool enough to take her out and have my way with her at some point. This went on for months. Finally I sort of weaseled my way into her apartment. So we’re hanging out and she put Rocks by Aerosmith on, and I was mesmerized by it. It was like the be-all-and-end-all, best attitude fuckin’ hard rock record. This was before I had started to play guitar . . . I’d grown up with music, but this was like my record. I must have listened to it about half a dozen times, completely ignored her, and then got on my bike and rode. I was totally in there, I was at least gonna get a decent french kiss out of it, and I completely dropped the ball for Aerosmith, and that was that. It’s probably one of the records that sums up my taste in hard rock bands to this day. Meanwhile, she’s out there somewhere and I missed it. But it was worth it. That was the record that changed my life.”

If you’re a fan of Aerosmith, rock, hard rock, classic rock, or whatever it is called these days, this is a book worth picking up. Sure it ends with the release of Nine Lives, and there’s more to the story today than when the book was first released in 1997, but it’s everything you’re looking for.

Read the Secret File of technical information and quotes from Walk This Way: The Aerosmith Autobiography.

To let another into your heart, first let yourself in.
Let’s finish this up now, someone is waiting for you on that.
Today it’s okay to make a few choices by going with your instincts.
More Fortunes >