The Elf Queen of Shannara is about Destiny, Magic, Identity, and Truth.

The Elf Queen of Shannara is the third book in a four-book series titled The Heritage of Shannara, that follows the original Sword of Shannara Trilogy taking place in Terry Brooks’ fantasy world The Four Lands.

It mainly follows Wren Ohmsford as she seeks to learn her true identity and heritage while adding in a chapter here and there to show us where the other characters in the series are. As if focusing on the Queen in a chess match but occasionally glancing at the knight or rook as you plan your next move, which in this case is the fourth book in the series, The Talismans of Shannara. 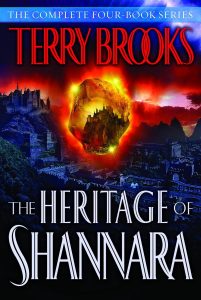 In following Wren, we are experiencing first hand her charge as given to all of the Ohmsford’s in the Shannara bloodline (that the Shade of the Druid Allanon charged them all with back in The Scions of Shannara, the first book in the series). So, as read through the first two books of the charges given by Allanon’s shade to Par and Walker Boh, now is the time for Wren to take center stage, “Find the Elves and return them to the world of Men!”

But for Wren, a rover girl at heart with an elven lineage she knows little about, this search is for more than saving The Four Lands, it’s about destiny, magic, identity, and truth.

While the external journey itself is fraught with danger, that is a danger that Wren is aware of, while the internal exploration of who she is tends to appear more dangerous at times, while she battles what she learns and what she has yet to discover.

As Brooks describes, “The truth was an elusive bit of cloth that would not be contained, that refused to be revealed. It fluttered away at each approach she made, ragged and worn, a shimmer of color and light.” And for Wren, more than any other character in the Shannara series thus far as I have read, the truth is not only elusive but dangerous, as knowledge tends to be. And in that way, knowledge is like the magic she is also seeking to discover, “They were appalled that the magic had been so misused. For it was an inaccurate and changeable magic at best, and what they created was not always what they desired.”

While Wren wrestles with her desire to learn about her history, as with truth, magic, and destiny, not all that you survey within and without are as they seem. 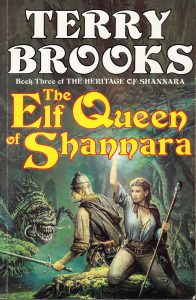 However, Wren is not alone in this quest, at least not where finding the Elves (as charged by the Shade of Allanon) is concerned. Her Rover mentor Garth is, as always, her trusty companion and along the way she meets more individuals to whom she must rely on, though her trust is hard to come by.

As far as The Heritage of Shannara Tetralogy (or Quadrilogy, if you prefer) is concerned, while I haven’t read the final installment yet, The Elf Queen of Shannara is by far the most compelling with it’s mix of both inner and outer demons, inner and outer journeys, and the revelations that may or may not come to pass in the final book.

I look forward to finishing this series with The Talismans of Shannara, and I urge you to go and pick up this series as a whole. Terry Brooks is in fine form with his storytelling throughout all three books I have read, and I expect more of the same when I get to the last.

Read the Secret File of technical information and quotes from The Elf Queen of Shannara by Terry Brooks.

Your moods signal a period of change.
Fame and fortune are coming your way.
Courtesy is the password to safety.
More Fortunes >