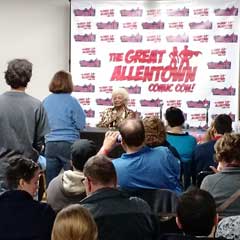 The Interrogation of Cartoonist, Designer, Artist and Fanboy Chris Flick

This interrogation was an easy one. But it appears, after all the questions were answered, we still don’t know Chris. He appears to be, to quote an old movie, “a riddle, wrapped in a mystery, inside an enigma.” Perhaps we may never know the real Chris, but this is a good start.

Small Oddities: Hearts, Packages, Gravity, the Agent, and a Dragon

From video games to television, science and technology to the spy, and even a glimpse of the fantastic, here are five pieces from deviantArt.com that are simply extraordinary.

The Interrogation of Artist and Graphic Designer Ryan Lynn

There’s a lot to learn about graphic designer Ryan Lynn, as you’ll find in the following interrogation, like how his weekends are spent recharging his batteries and how his day job, at 4O1! Creative, provided him his first foray into the world of Agent Palmer.

Everyone in the world has their beverage of choice; tea, coffee, beer, wine, Mountain Dew. Here are five wonderful artistic representations of coffee and beer from the DeviantArt community.