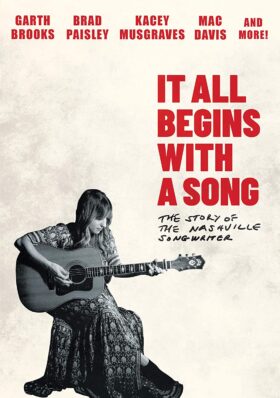 It All Begins With A Song

Tagline: The Story of the Nashville Songwriter

Synopsis: Going behind the performers to the creators of well-known songs and the city they call home. Featuring both up-and-comers and the greats who turned Nashville into a songwriting center.

Declassified by Agent Palmer: “It All Begins with a Song” sings praises of the Creative Process

“I guess one of the biggest reasons is that the antenna that sent out the Grand Ol’ Opry to far-flung areas all over this country at a time when everybody listened to radio. It was almost like the Bat Light into the night saying, you know, come here, this is where this happens.” – Chip Esten

“Artists came to Nashville who, once they made it on the Grand Ol’ Opry, they were in their cars driving from Birmingham to Minneapolis to play a show. So they came back on Friday and Saturday night to perform on the Grand Ol’ Opry. And when they came back in, those artists who stayed at home in Nashville would greet them at the backstage door and say, ‘Hey, I wrote a song, I got a song for you.’ So an industry was born out of entertainers being out on the road and not having enough time to write songs. And that’s how Nashville became this epicenter of songwriting in the world.” – Rodney Crowell

“I just sort of fell in love with this, the idea that the entire country music industry took place on about four square blocks of this quiet little town. And most, except for the record companies, everything took place in a house that was converted into an office.“Thom Schuyler

“You go get a pizza, they’re gonna have a songwriters’ night at the pizza place. This is the only town I’ve ever known where banks have a stage in the bank. – Bart Herbison

“It’s a beautiful town. It can make all your dreams come true. But it can also be such a bitch of a town. It can be so hard. You’re putting your heard out on the line daily and getting it smashed because it doesn’t sound like the radio or no one will ever record that song ‘cause it’s too sad, or something.” Caitlyn Smith

“It’s a no business. You’re gonna hear no. No is usual. You’re gonna write a lot of songs, and they’re gonna pass on most of them. So you’re gonna have to want it bad enough to deal with failure. Because when they finally say yes, it’s amazing.” – Lee Thomas Miller

“Songwriting is a bitch. And then it has puppies.” – Steven Tyler

“Now, we need a hit chorus, and we need two verses. It needs to be simple, but it needs to be profound, you know. We need to be brief. But when you start getting into those things, this is a different part of your brain from the part of the heart that made you think of the idea in the first place.” Lee Thomas Miller

“Anybody who’s made a career as a writer will tell you, really in some ways, it’s not even the end product. It’s the process that’s most important. “ Rodney Crowell

“Country music isn’t nothing but three chords and the truth.” Harlan Howard

“Songwriters write songs. But they really belong to the listener.” Jimmy Buffett

“It’s just crazy that it’s an industry, an industry where you go to work having no idea what you’re actually going to produce, and you’re gonna take an idea that’s floating around in your head and put it on paper and make it, you know, actually concrete, which turns into hopefully, a song, which turns into a demo, which turns into maybe hopefully a record cut, which then people over the world hear. It’s like what, how is that even a job?” – Kacey Musgraves

Fame and fortune are coming your way.
Even a broken clock is right two times a day.
Look forward to great fortune and a new lease on life!
More Fortunes >