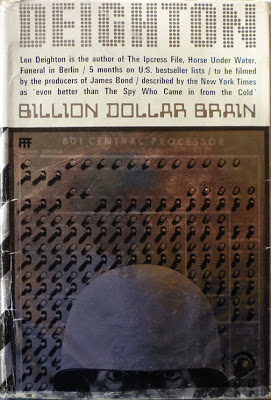 Main Character: Unnamed or Nameless Spy (a.k.a. Harry Palmer in the film versions of the series.)

Synopsis: In this thriller featuring anti-hero Harry Palmer, a crazy millionaire threatens world security when he decides to wage his own private Cold War.

The first time I ever met Sonny he forged a Ministry of Works pass for me in the name of Peter Jolly. Since that day, with a faith in his own handiwork that typified him, he always called me Mr. Jolly.

“Pardon me,” said the gray-haired man. “Do you happen to know the phone number of Stockmann’s Department Store?”
“It’s 12-181,” I said, “unless you want the restaurant.”
“The restaurant number I know,” said the man. “It’s 37-350.”
I nodded.
“Why have they started all this?”
“I shrugged. “Someone in the Organization Department read one of those spy books.” The man flinched at the word “spy.” It was one of those words to avoid, like the word “artist” is avoided by painters. He said, “It takes me all my time to remember which bits you say and which bits I say.”
“Me too,” I said. “Perhaps we’ve both been saying it the wrong way round.”

Few agents can be quite sure whom they work for because the nature of the work precludes their being able to check back.

“I’m a cautious coward with too much survival training.” – Main character

“And a lot of help you were. You did nothing.”
“That’s my specialty,” I said, “I always do nothing.”

*Come to rest–the period in which you make sure that a person is not under surveillance. A man who has come to rest can safely be contracted. There is no set time that this expression covers, it lasts until you are sure the man has no tail or until you are sure he has. A main tailed or suspected is said to be spitting blood.”

‘You’re going to work your arses off today, the lot of you. Because I’m a tyrannous bastard. The critics are ignorant bastards, the audience mercurial bastards, and you are incompetent bastards. The only legitimate thing around here is the theatre.’

“But in my experience there aren’t many evil people around. Just ill-informed, misguided and ignorant ones.” – main character

Stok was something no computer could deal with; perhaps that’s what I liked about him.

I splashed more over my face. It looks therapeutic in movies but it made me feel worse than ever.

“No interrogation I conduct ends until I get a story that I believe.” – Stok

“Modern victories are not won by movements of armies but by imperceptible change of molecules. Victories must be won inside the hearts of men.”
“I prefer my victories inside their heads,” I said.
“Come along, English. We soldiers must not talk politics. Our job is to take the stupid and impossible fantasies of our politicians and try to make them work in terms of flesh and blood.” – Stok

I joined the cast of the relentless 3D movie that calls itself Manhattan, where it’s always night and they keep the lights on to prove it.

New York, New York–where the enterprise is free if nothing else is.

I seemed to have spent most of my life in hotel rooms where room service wanted money in advance and the roller towels were fixed with a padlock. Now I had graduated to the Birmingham Rug and Dufy print circuit, but I wondered what I had sacrificed to do it. I had few friends. I stayed well clear of the sort of people who thought I had a dead-end job in the Civil Service, and those who knew what the job was stayed clear of me. I poured myself a drink.

“They made me a general ‘cause I’m old. Old age is an incurable disease, see. People think they ought to do something for you. Me they made a general. O.K.?” He winked at me and then scowled as though he had thought better of it.

“I got nothing against clichés, son. It’s the quickest method of communication yet invented, but I get you.”

It was one of those days when police academy cadets were controlling the traffic and miles of brightly colored taxicabs slithered very slowly up the avenue of graceful skyscrapers like banded snakes between jungle trees.

“Husbands are a byproduct of marriage,” said Harvey.

I was weary of war and sick of hate.

Politics was simple black-and-white toughness–like a TV western–and diplomacy was just a matter of demonstrating that toughness.

“I’m so mixed up. Why do men take everything so seriously? They ruin everything by taking every little thing I say seriously.” – Signe

“Computers are like Scrabble games,” I told her. “Unless you know how to use them, they’re just a boxful of junk.”

“Everything is expendable,” he said. “Everything. When it gives more trouble than it’s worth, no matter what the sentimental attachment might be.”

“Oh, I don’t know, ‘Down with the beer that is bitter, up with the wine that is sweet’– What’s more working class than that?”

Equally patiently Dawlish said, “And I am working here with imbeciles all around me but that doesn’t make me an imbecile.”
“Do you want a second opinion?”

“I suppose it’s the same with all of us. You get to be good at your job, to take a pride in it, and then you find it’s difficult to give up. He’s been working since he was fifteen. Well-it’s natural to him now, like breathing.”

“Experience is a method of endorsing prejudices,” I said.
“No,” said Harvey. “When did you last call on your experience? When you doubted your chances for success, that’s when.”

“He’s a deceit artist. What iambic pentameter was to Shakespeare so lying is to him.”

“I don’t need Walt Disney and Hollywood, Detroit and Madison Avenue to tell me how to dress and think and hope. But they write the script for the American dream.”

“Listen, Harvey. Just because you’ve been playing electronic monopoly out there in Texas for too long, don’t get the idea that you’re in the intelligence business.”

“Is it man’s ultimate fate to be ruled by machine?”

“Compromise is no pejorative word,” I said. “If we choose between compromise and war, I’ll take compromise.”

“You must imagine, English, that there are two mighty armies advancing toward each other across a vast desolate place. They have no orders, nor does either suspect that the other is there. You understand how armies move–one man a long way out in front has a pair of binoculars, a submachine gun and a radiation counter. Behind him comes the armor and then the motors and the medical men and finally the dentists and the generals and the caviar. So the very first fingertips of those armies will be two not very clever men who, when they meet, will have to decided very quickly whether to extend a hand or pull a trigger. According to what they do, either the armies will that night share an encampment, exchange stories and vodka, dance and tell lies; or those armies will be tearing each other to shreds in the most efficient way that man can devise. We are the fingertips,” Stok said.

“Responsibility is just a state of mind,” said Dawlish.

“You mustn’t ask for too much. Success is just a state of mind. We don’t get called in until there has already been a failure somewhere. The trouble with young people nowadays is that they worship success. Don’t be so ambitious.” – Dawlish

“Everyone feels trapped, it’s our way of rationalizing our leaden lot in the face of our golden potential.” – main character

“There’s no nice glib explanation. He wasn’t a Communist spy, a revolutionary or a subversive Marxist. They never are. The day of the political philosopher is over. Men no longer betray their country for an idea; they respond to immediate problems. They do the things they do because they want a new car or they fear they’ll be fired or because they love a teen-age girl or hate their wife, or just because they want to get away from it all. There was no sharp motive. There never is, I should have known that, just a ragged mess of opportunism, ambition and good intentions that go wrong. That’s the path to hell. Just build an inch of it every day and it can be a painless journey.”

“One improvises,” said Dawlish. “Use your initiative.”
“I said, “I used up so much initiative on this case that it was wearing thin.”

“I said he may be a little captious, he certainly has a chip on his shoulder and he is liable to get hold of the wrong end of the stick, but he does keep the Department lively.” Dawlish to Ross on Main Character

So if you are indulging in a little extracurricular espionage, remember that you might be working for your ideological enemies. Take a tip from the professionals; do it just for the money.

Whoever wants to reach a distant goal must take small steps.
To let another into your heart, first let yourself in.
Even the greatest of whales is helpless in the middle of a desert.
More Fortunes >