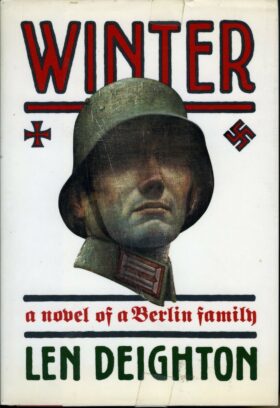 Tagline: A Novel of a Berlin Family

Synopsis: “Chronicles the lives of a German family named Winter, from the close of World War I through the Second World War.”

Fiction had unity and style, fiction had a beginning and a proper end, fiction showed evidence of planning and research and usually attempted to impose an orderly pattern upon the chaos of reality.

“One of them is a success story,” said Callaghan, “and the other is a goddamned horror story.” Actually, neither was a story at all. Like most people, they had lived through a series of episodes, most of which were frustrating and unsatisfactory.

…the capacity for cruelty that comes so easily to the self-righteous.

…filled with promises and farewells: false promises but sincere farewells.

“The scientists in my factory, the engineers who design the engines and the structures: what talents they have, and yet they will never get more than a simple living wage. Most of them could make far more money in the sales department, but they are too interested in their work to change. Talent is an impediment to them. Look at all the penniless artists desperate to sell their work, and the musicians who beg in the street.”

Berlin had always been a city of spies and informers, and it probably always would be.

He’d studied other people in the bar, with particular interest in the younger women. He’d had so little free time since the war began–so little time amongst the civilians–that he’d still not got accustomed to the shorter skirts and the display of female ankles. Women had worn full-length skirts since ancient Greece; surely there was something apocalyptic about the new fashion. If not apocalyptic, certainly provocative, especially when some of the younger ones wore these flesh colored stockings!

“You don’t know this guy. Don’t imagine he has any kind of written manifesto that you can challenge him on. He’s all things to all men. He trades on emotions, not facts. When he goes for the Reichstag he’ll have a fresh set of answers ready. This guy is dynamite. We had an office in Munich. I’ve heard him speaking at his meetings. He holds people spellbound. He’s full of spite, brimful of hatred and contempt. There is nothing constructive in what he says: just threats of what he’ll do to the sort of people he blames for all the troubles.”

…the warm glow of the believer, and such men suffer no self-doubts.

“I’m an engineer. Designing, costing, and testing prototypes is about as much as my brain can deal with. I like things I can measure on a micrometer and calculate on a slide rule. I just haven’t got the time, let alone the inclination, for politics.

“He came on the stage and looked at the audience in silence for several minutes; then, when everyone was getting nervous, he’d say, ‘Well, that’s enough of the political discussions; now we’ll tell the jokes.”

In the dangerous game of espionage, the “common touch” could be a trump card.

Veronica had taken her husband’s death stoically. She’d loved him with that tenderness and loyalty that her generation were taught a provider deserved. Though she wept for him, Harry’s death marked the end of her bondage.

“Speaking with these Krauts has convinced me that there were only three Nazis in the whole of Germany, and no one knows who those three are.”

It had become a young man’s world: courtesy had gone.

Whoever wants to reach a distant goal must take small steps.
To let another into your heart, first let yourself in.
Sharing little joys offer great hope to others.
More Fortunes >