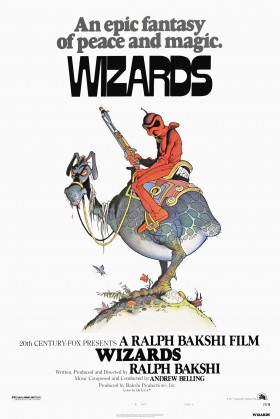 Tagline: An epic fantasy of peace and magic

Synopsis: On a post-apocalyptic Earth, a wizard and his faire folk comrades fight an evil wizard who’s using technology in his bid for conquest.

“I’m too old for this sort of thing. Just wake me up when the planet’s destroyed.” – Avatar

Blackwolf: Brother, there is no need for me to destroy you. Surrender! Surrender your world!
Avatar: You always did need an audience you sap.

Avatar: Allright, creep, Now before I untie you, I wanna tell you a couple of things, and I want you to listen, and listen carefully. This has been the biggest bummer of a trip I’ve ever been on; but if you let me down, or you hurt my friends, especially the broad, I got stuff planned for you that’ll take twenty years to kill ya.
Peace: …no pain…
Avatar: …And you’ll be screaming for mercy in the first five seconds.

Avatar: You know, the world owes you much, kid. Even if we don’t take another step.

Elinore: I have always been good, and could even… be better sometimes.