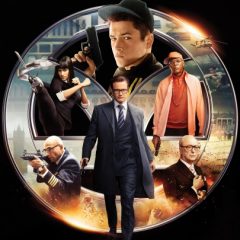 I love Kingsman: The Secret Service a lot. According to the Panel to Screen extra on the Blu-ray, the movie is a “postmodern love letter to spy movies.” Director Matthew Vaughn felt that spy movies have become too serious and no longer fun, and this movie is the result.

Hollywood talent agrees as well. Keep in mind the A-list actors who are in this: Colin Firth, Samuel L. Jackson, Michael Caine, and Mark Hamill.

Into The Shadows is the first novel by Lieutenant Colonel Michael Brady. It’s fast, it’s current, and it’s grounded as a thriller introducing hero Michael Brennan to the world, while he attempts to save it from terrorists, globetrotting from Israel, Cyprus, Germany, Syria, Turkey, Jamaica, Cuba, and New York City with a diverse supporting cast.

Special Bulletin for Spy Aficionados: Atomic Blonde is a Must See Film.

The Coldest Interrogation: Eight Questions with Antony Johnston Author of The Coldest City

The path of life shall lead upwards for you.
Courtesy is the password to safety.
Sharing little joys offer great hope to others.
More Fortunes >