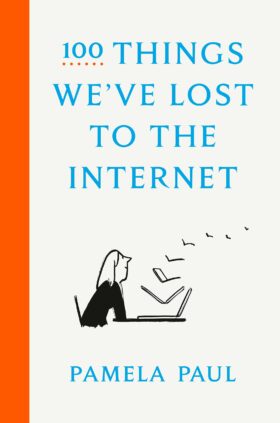 100 Things We’ve Lost to the Internet

Declassified by Agent Palmer: “100 Things We’ve Lost to the Internet” is a Comprehensive and Contemplative Reading Experience for Everyone

“One morning you’ll simply wake up and it will be over, before you’ve even realized. Lying still, eyes closed, ears pricked, trying to sense the flow of the morning air, you’ll feel that something has changed from the night before, and you’ll know that you’ve lost something, that something has been disappeared.” – Yoko Ogawa, The Memory Police

…we have gone through the repeated realization that every time the Internet swings the door wide open, the consequences are at once liberating and dire.

My own grievances reflect my experience as a Gen Xer, the worries of a journalist in a field under siege, the priorities of a reader for whom tucking a bookmark between pages is a cherished ritual, and the hopes and anxieties of a mother of three in New York.

Tuning out no longer means spacing out; it means tuning in to something else.

There’s a reason people have their most exciting and original thoughts in the shower. Our minds start to wander and we follow. You have to turn off the input in order to generate output. But the input never stops.

The Internet is for wallowing in one another’s happiness.

Will future generations even bother with the IRL reunion every five years? Kids drag all their elementary school and high school friends along with them to college whether they want to or not. You can’t leave your yearbook and your old high school acquaintances unattended in your mom’s basement the way you used to. Your yearbook is everywhere.

We’re running out of bookish boys to grow into bookish men (and they are missed).

Reading “the paper” was something all grown-ups did, and as an aspiring grown-up from an early age, it was something I wanted to do, too.

…the Internet is always listening. It magnifies the tiny moment and amplifies the petty and the ephemeral into something that feels enormous and eternal.

All the desktop tchotchkes are in a mad fight against obsolescence since there is often no more desk for them in the old-timey furniture sense of the word.

That the Internet ignores or undermines components of human existence such as empathy, deep relationships, child development, family harmony, sustained conversation, compromise, and compassion may be built into the system.

Interaction is more often about finding people to get angry with and angry at than it is about sharing hearts and minds.

A 2010 University of Michigan study found that empathy among college students declined 40 percent between 1979 and 2010, with the steepest drops in perspective taking and empathetic concern taking place during the Internet era, that is, between 2000 and 2010. You may not be able to tie the decline of empathy to the vagaries of an algorithm in the nead times of a scientific study, but it’s nonetheless hard to ignore the coinciding trajectories.

…learning to spell in the Internet era is like insisting on doing manual arithmetic while holding a calculator.

Yet signs out there in the world mark people like us as a dying breed.

Teenagers knew how to torture one another through technology long before the Internet rolled around.

Manners are charming, but time-consuming.

But as with so many other things, you tend to lose the big picture when you’re seeing it only on a small screen.

Were we always this way, just without the means to telegraph it, or does the Internet turns us all into show-offs?

Only offline do you find out what people truly think.

Even the greatest of whales is helpless in the middle of a desert.
To let another into your heart, first let yourself in.
Whoever wants to reach a distant goal must take small steps.
More Fortunes >