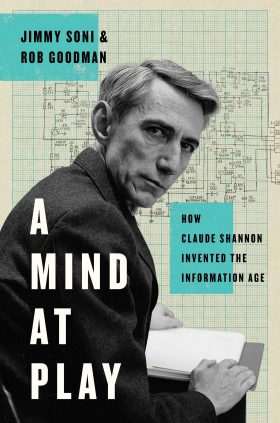 A Mind At Play

Declassified by Agent Palmer: A Book Review of “A Mind At Play: How Claude Shannon Invented the Information Age” by Jimmy Soni and Rob Goodman

Geniuses are the luckiest of mortals because what they must do is the same as what they most want to do and, even if their genus is unrecognized in their lifetime, the essential earthly reward is always theirs, the certainty that their work is good and will stand the test of time. One suspects that the geniuses will be least in the Kingdom of Heaven–if, indeed, they ever make it; they have had their reward. – W. H. Auden

And yet the world his idea had made possible was only just coming into being. Now we live immersed in that world, and every email we have ever sent, every DVD and sound file we have ever played, and every Web page we have ever loaded bears a debt to Claude Shannon.

“I think one tends to get into work that you find easy for yourself.” Shannon acknowledged.

Anarchy concealed order; or rather, anarchy was dozens of kinds of order happening at once, all shouting to be heard over one another.

And turning art into science would be the hallmark of Shannon’s career.

For an abstracted man at his most content, the world isn’t there to be used, but to be played with, manipulated by hand and mind.

Shannon explained later: “After I had found the answers it was always painful to write them up or to publish them (which is how you get the acclaim.” A more magniloquent scientist might have added something about the pure Platonic joy of discovery. Not Shannon, though: “Too lazy, I guess.”

Pierce told Shannon on numerous occasions that “he should write up this or that idea.” To which Shannon is said to have replied, with characteristic insouciance, “What does ‘should’ mean?”

George Henry Lewes once observed that “genius is rarely able to give an account of its own processes.”

Although the molecule’s discovery was still five years away in the future, Shannon was arguably the first to conceive of our genes as information bearers, an imaginative leap that erased the border between mechanical, electronic, and biological messages.

And when we separate meaning from information, we find that some of our most meaningful utterances are also our least informative.

It turns out that some of the most childish questions about the world–”Why don’t apples fall upwards?”–are also the most scientifically productive. If there is a pantheon of such absurd and revealing questions, it out to include a space for Shannon’s: “Why doesn’t anyone say XFOML RXKHRJFFJUJ?” Investigating that question made clear that our “freedom of speech” is mostly an illusion: it comes from an impoverished understanding of freedom. Freer communicators than us–free, of course, in the sense of uncertainty and information–would say XFOML RXKHRJFFJUJ. But in reality, the vast bulk of possible messages have already been eliminated for us before we utter a word or write a line. Or, to alter just slightly one of the fortuitous sequences that emerged by chance on Shannon’s notepad: THE LINE MESSAGE HAD [TO] BE THESE.

…to communicate is to make oneself predictable.

Because we can compress our messages, video files can be compacted to just a twentieth of their size. All of this communication–faster, cheaper, more voluminous–rests on Shannon’s realization of our predictability. All of that predictability is fat to be cut; since Shannon, our signals have traveled light.

And now it was evident that any message could be sent flawlessly–we could communicate anything of any complexity to anyone at any distance–provided it was translated into 1’s and 0’s. Logic is digital. Information is digital.

Shannon, like many an intuitive mind before him, loathed showing his work. So Betty, who could hold her own mathematically, became his scribe.

As Betty put it, “some of his early papers and even later papers are in my handwriting, so called, and not in his, which confused people at first.” Confusing perhaps–but also testament to one of the great mathematical marriages of our time: one that produced path-breaking work and lasted the rest of Claude’s life.

Seldom do more than a few of nature’s secrets give way at one time.

One curious side effect of all this freedom: Shannon became, during this period, an inconsistent correspondent, even as the volume of his correspondence began to grow with his reputation. Letters went unanswered for long stretches, so many for so long that Shannon collected them all in a folder labeled “Letters I’ve procrastinated in answering for too long.”

“I think the history of science has shown that valuable consequences often proliferate from simple curiosity,” Shannon once remarked.

“In the long run [the machines] will be a boon to humanity, and the point is to make them so as rapidly as possible. . . . There is much greater empathy between man and machines [today] . . . we’d like to close it up so that we are actually talking back and forth.”

“We artificial intelligence people are insatiable,” he once wrote. Once machines were beating our grandmasters, writing our poetry, completing our mathematical proofs, and managing our money, we would, Shannon observed only half-jokingly, be primed for extinction. “These goals could mark the beginning of a phase-out of the stupid, entropy-increasing, and militant human race in favor of a more logical, energy conserving, and friendly species–the computer.”

“A very small percentage of the population produces the greatest proportion of the important ideas,” Shannon began, gesturing toward a rough graph of the distribution of intelligence. “There are some people if you shoot one idea into the brain, you will get a half an idea out. There are other people who are beyond this point at which they produce two ideas for each idea sent in. Those are the people beyond the knee of the curve.”

But then the great insights don’t spring from curiosity alone, but from dissatisfaction–not the depressive kind or dissatisfaction (of which, he did not say, he had experienced his fair share), but rather a “constructive dissatisfaction,” or “a slight irritation when things don’t look quite right.” It was, at least, a refreshingly unsentimental picture of a genius: a genius is simply someone who is usefully irritated.

“For everybody who built communication systems, before [Shannon], it was a matter of trying to find a way to send voice, trying to find a way to send data, like Morse code,” recalled Gallager. “The thing that Claude said is that you don’t have to worry about all those different things.” Now their worries had a far more productive outlet: the coding, storage, and transmission of bits. “Once all the engineers were doing that, they started making this enormously rapid progress, start finding better and better ways of digitizing things and of storing and of communicating these very simple objects called binary digits, instead of these very complicated things like voice waveforms. If you look at it that way, Shannon is really responsible for the digital revolution.”

Asked if he was lucky in life, Shannon answered, “Far beyond any reasonable expectations.”

As Graham observed, “mathematics is often described as the science of patterns. Juggling can be thought of as the art of controlling patterns in time and space.” So it’s no surprise that generations of mathematicians could be found on university quads, tossing things in the air and catching them.

I don’t think I was ever motivated by the notion of winning prizes, although I have a couple of dozen of them in the other room. I was more motivated by curiosity. Never by the desire for financial gain. I just wondered how things were put together. Or what laws or rules govern a situation, or if there are theorems about what one can’t or can do. Mainly because I wanted to know myself.

At more than 2,100 words, it was not simply a throwaway idea–it shows Shannon’s willingness to spend hours fleshing out the implications of a joke, as well as his imperturbable indifference to the honors that came his way. [On a paper that proposed a solution to an American driving in Britain.]

Shannon himself had mixed feelings about all of the travel. He was a homebody and an introvert, and more important, a less-than-adventurous eater.

What were those values? Simplicity matters. Elegant math was forceful math. Inessential items, superfluous writing, extra work–all of them should be discarded.

For one thing, Shannon’s body of work is a useful corrective to our era of unprecedented specialization. His work is wide-ranging in the best sense, and perhaps more than any twentieth-century intellect of comparable stature, he resists easy categorization. Was he a mathematician? Yes. Was he an engineer? Yes. Was he a juggler, unicyclist, machinist, futurist, and gambler? Yes, and then some. Shannon never acknowledged the contradictions in his fields of interest; he simply went wherever his omnivorous curiosity led him. So it was entirely consistent for him to jump from information theory to artificial intelligence to chess to juggling to gambling–it simply didn’t occur to him that investing his talents in a single field made any sense at all.

For all the fun he was having, Shannon tackled some of the most significant scientific questions of his era and worked at the boundaries of math, computer science, and engineering–in some cases helping to firm up what the boundaries were!

As AI pioneer Marvin Minksy said on the news of Shannon’s death, “For him, the harder a problem might seem, the better the chance to find something new.”

…the other great hallmark of Shannon’s life: the value of finding joy in work. We expect our greatest minds to bear the deepest scars; we prefer our geniuses tortured. But with the exception of a few years in his twenties when Shannon passed through what seemed like a moody, possibly even depressive, stage, his life and work seemed to be one continuous game. He was, at once, abnormally brilliant and normally human.

…it is not the Internet that is unnatural, nor our feast of information, but a refusal to consider what their origins are, how and why they are here, where they sit in the flow of our history, and what kinds of men and women brought them about. We think there is something of an obligation in beginning to learn these things. We think that the honor our subject would have cared about–if he cared at all–would not have been adulation, but a bit of comprehension.

Nothing in the world can take the place of persistence.
Courtesy is the password to safety.
To let another into your heart, first let yourself in.
More Fortunes >