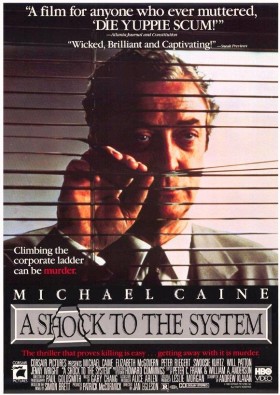 A Shock to the System

Tagline(s): Killing is easy… Getting away with it is murder.
Climbing the corporate ladder can be murder.

Based On: A Shock to the System by Simon Brett

Synopsis: When you think you’re at the top of the corporate ladder and then discover they have managed to pull that ladder away, sometimes you have to take it upon yourself to ‘level’ the playing field, both professionally and personally.

Declassified by Agent Palmer: A Shock to the System: Die Yuppie Scum and other Corporate Insights (A Spoiler Free Review)

Graham Marshall: It all began one night when the lights went out.

Graham Marshall: Whoa, let’s not all panic – you, you, and you panic; the rest stay calm.

Lieutenant Laker: He was your superior, wasn’t he?
Graham Marshall: No, he was my boss.

Graham Marshall: I’ve never understood why you need a stair *machine* when we have stairs!
Leslie Marshall: Because I have to keep going up, silly! If I had to keep going down, I’d lose the whole aerobic benefit.

Robert Benham: This isn’t exactly comfortable for me, I know you wanted this job. I suppose if we were rival princes, I could just have you killed. It would save a lot of politics.
Graham Marshall: It’s not that easy to kill someone and get away with it.

Melanie O’Conner: I think it’s rotten, Mr. Marshall. The only reason you didn’t get that job is ’cause they didn’t give it to you!

Graham Marshall: My father had it all figured out. He was a London bus driver. And when I was a boy, he used to take me over the river to Mayfair, where the rich people lived. And he used to say to me, “Son – there is no heaven. Here is the closest you will ever get. Life, here, is sweet. Life, back over there, is hard. So live over here, son!”

Graham Marshall: You look fit today, George. Ready to do battle?
George Brewster: It’s all up for me, and I’ve done what I can for you! So let’s just read our papers…
Graham Marshall: I think you’re jumping the gun.
George Brewster: Oh, come on. The whole point of these takeovers is to sell off the assets, and put old farts like me out to pasture. I can hear the fat lady singing, Graham. I can hear her singing.

George Brewster: Space invaders, Graham. The new people – all gadgets and the bottom line. Stop them early, or they’ll run right over you! “We can be more efficient than such-and-such a program…” Blah blah blah, it’s all bullshit, Graham, soup to nuts. It’s code for mass firings and low quality. Just melt the market dry, and get out. I mean, if our system wasn’t any good, why did they take us over in the first place? Christ!

Robert Benham: Gentlemen, gentlemen… you don’t understand! We are the young, the proud! We shouldn’t be ashamed of success! We should say, “Yes, I *have* a boat. I *have* a country home. I *have* a girlfriend named ‘Tara’!” Say it with me, brothers.
Executive #3: I do have a Mercedes.
Executive #2: I have a condo with a pool.
Executive #1: I have a personal sports trainer.
Graham Marshall: I have a wife, a mortgage, and two dogs.

Graham Marshall: Why don’t you bring Henry Park in here, huh? Why don’t you bring Melanie in to make sure the phone gets answered? Hell, we could bring in the whole goddamn New York Knicks, just to make sure your trash hits the basket! How’s that?
Robert Benham: If I thought I needed an assistant to do my job…
Graham Marshall: Meaning what? That I don’t do *my* job? Then why don’t you have me removed, Bobby Boy?
Robert Benham: Because you’re too senior in the company to be fired for anything less than gross insubordination.
Graham Marshall: So you’ve decided to have me removed piece by piece. A privilege here, a responsibility there – never enough to fight over, just a subtle drain of power, right? Well, let me tell you something, Bobster. You don’t know the first fucking thing about power. I have more power in this hand than *all* you fucking know!

Graham Marshall: He felt like one of those gods who appeared to maidens in human form. He knew he’d been great. Ah, Stella… such a sweet girl, really. He’d have to be sure to reward her for being in the right place at the right time.

Graham Marshall: There was only one tiresome detail. Jones. He just wouldn’t let go of that corner office. Abracadabra, alakazam. Bye bye, baby.

Today it’s okay to make a few choices by going with your instincts.
Nothing in the world can take the place of persistence.
Let’s finish this up now, someone is waiting for you on that.
More Fortunes >