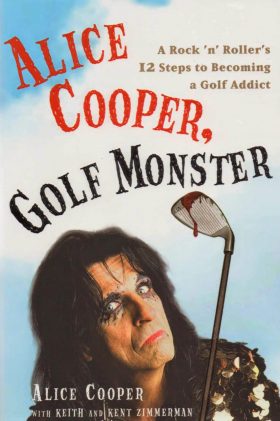 Tagline: A Rock ‘n’ Roller’s Life and 12 Steps to Becoming a Golf Addict

Synopsis: This is the story of Cooper’s life, and also a story about golf. He rose from hacker to scratch golfer to serious Pro Am competitor and on to his status today as one of the best celebrity golfers around—all while rising through the rock ’n’ roll ranks releasing platinum albums and selling out arenas with his legendary act.

So I am obviously a golf addict. I am the first to admit it. But it didn’t used to be that way . . . my addictions used to be much more destructive, and the road to redemption was a long, painful one.

Even though golf and rock ‘n’ roll are two very different animals, both remain very strong forces in my life. If rock ‘n’ roll made my life, then golf saved my life. Included in this tale of my life in rock are the twelve golf steps I created that enabled me to trade in those harmful addictions for healthier ones.

When I was a long-distance runner in high school, I never stopped in the middle of a four-mile run. No matter how winded and achy I felt, I always finished the race.

My seventh cousin was the Marquis de Lafayette, the same Lafayette who secured the support of the French during the American Revolution and fought alongside George Washington at Valley Forge.

I was the only male left to carry on the Furnier name. So, of course, I ended up legally changing my name to Alice Cooper.

I was transfixed with Ernie Harwell’s colorful play-by-play commentary on the radio.

I lived for baseball. When the sun came up, I grabbed my glove and I was ready to play until the sun went down, when you couldn’t see the ball anymore and it was time to rush home for dinner.

In our family, there were three basic rules:

And sometimes, in golf as in music, sometimes it’s beyond learning, beyond imitating, beyond imagination. Sometimes you need something that can’t be taught–passion, talent, and intrinsic understanding of the feel of the game.

The Beatles were the ultimate catalyst for me to move beyond art and painting and to try my own hand at music.

The first name out of my mouth was a girl’s name. Alice Cooper. Alice. Cooper. By the end of the night, the name kind of stuck. There was something about it. I conjured up an image of a little girl with a lollipop in one hand and a butcher knife in the other. Lizzie Borden. Alice Cooper. They had a similar ring.

Up to this point, few bands in America performed like the British did, with windmill chords, mad drums, brash in-your-face ego. The American hippie bands were mellow, rootsy, or trippy, groups like the Grateful Dead or Crosby, Stills, and Nash. Even the Doors and Love were slightly laidback and psychedelicized.

There we were, stylistically a cross between an out-of-control freight train and a horrible car crash. We were hard not to look at.

There are three compliments in my life I will always treasure:

Bob Ezrin became our George Martin. He came in (just like a great golf instructor) and, starting from the bottom to the top, he had us unlearn everything we knew and relearn it better.

Feeding the press often meant giving them lines like:

“The sicker our fans get, the sicker we’ll get.”
“Rock music is sex music and violent music.”
“We are the group who drove a stake through the heart of the Love Generation.”
“I’ve got a Peter Pan complex with a Captain Hook personality.”

Parents really hated us. But the kids knew. Alice was going out of his way to piss off the status quo-mongers.

After so much press speculation about how he felt about his son, my dad laid it on the line to them: “I know my son. I know who this Alice Cooper is. He’s as normal as anyone else, except that he’s got a very artistic way of expressing himself. He’s no drug-addled Satanist. I understand his sense of humor.”

Wow. My dad stood up for me. I was deeply moved-but hardly surprised, given the kind of man he was.

I probably would have worked as a graphic artist if I didn’t sing the songs.

A lot of those guys eventually died. Harry Nilsson. Keith Moon. John Belushi. I guess I was one of the few survivors out of that bunch. You can’t drink like that and not know that at some point it’s going to catch up with you. VO Canadian Club and Coke. That’s all I drank as a Vampire. Beer during the day, whiskey at night.

We were all riding a huge wave of celebrity. I could go anywhere in the world and people would recognize me. We felt immortal. Yet in the back of our minds, we knew we couldn’t live like that forever. It could end at any time, so we’d better party hard and love each night like it was our last. And for some of us, it was.

To this day, I say to Sheryl, “You know, I threw Raquel Welch overboard for you.”
Yeah, and it was the smarted thing you ever did.”

At the press conference, one of the reporters asked, “What is it like working with Dali?”
“Well,” I confessed, “I gotta be honest with you. I can’t understand a word he says.”
Dali jumped up and blurted out, “Perfect! The best form of communication is confusion.”

I critique rock bands the same way I do golfers. “Wow, that’s a great guitar player! He’s really good. But, you know, if you can get your drummer to simplify what he’s playing, you’d sound much better. It looks like he’s as busy on stage as the guitarist, so maybe you need to simplify the drum parts.”

I’ll suggest that the drummer listen to some Creedence Clearwater Revival or Ringo Starr or Charlie Watts. What do they do? They lay down the beat. You don’t hear busy Keith Moon-type drum fills from most great drummers. Keith Moon did that because he was the greatest rock ‘n’ roll drummer ever, bar none, but most drummers should stick to laying down a solid beat.

Like Groucho Marx, they considered me as one of the last of the vaudevillians. I was the new face, the guy who did what they used to. Entertain people. Make them laugh without taking myself too seriously.

A great swing is an amalgamation of the many different ones you pick up through your golf life. Like a music career, you’re a work in progress. You incorporate a little piece of everybody’s advice until it’s your own. Pretty soon you’ve got a Frankenstein swing.

Welcome to My Nightmare was a very tough act to follow, and my next few albums became total concept albums, with my alter ego Alice fighting epic battles. The question became Where do we send Alice for the next album? Finally, we decided: Let’s send Alice to hell. Let’s see if he can outhustle the devil.

Drinking was an everyday part of life in the fast lane. It was a symptom of the times, the late 1970s when we all felt immortal and invincible.

Growing older was something none of my rock ‘n’ roll peers saw coming. We were kids when we first got into this game, and nobody expected to live to see the light of middle age. In fact, with the drink, drugs, wine, women, and song, none of us even saw middle age coming.

The idea that I’m playing society’s villain is not inconsistent with my spiritual views. In fact, both Alice and I maintain that what the world needs now is a gigantic hypodermic shot of morality and common sense, and satirizing the villainy in the world might just help.

I still see the world as a place in sore need of a massive shot of not only morality, but also satire, and as long as Alice is willing and able, I will continue to take shots at the absurdity of the world through my music.

A lot of Alice’s show is satirical and cynical. Alice is a distorted and exaggerated reflection of society taken to extremes-I’m holding a mirror up to evil itself and making people think about it. By making fun of society from the fringes, I never have to worry about being mistake for a sugarcoated praise performer.

I come from that unique first generation of arena rockers who are still playing the same music we played when we were eighteen or nineteen–and it still works, which is weird. That won’t happen again, and I’ll tell you why: Twenty-year-olds in rock bands are finding their careers cut short by the time they reach their thirties. Either the band breaks up or their short-attention-spanned audience loses interest.

The era of having several dominant multiplatinum rock bands operating at one given time–like having the Beatles, the Stones, Led Zeppelin, Alice Cooper, the Moody Blues, the Eagles, the Who, and Jethro Tull all making music at the same time–seems to be over with. Nobody’s ever going to run that race again. We are the last of the rock royalty.

Back when it was still the early days, when parent groups used to hate my act, I used to tell my fans, “If you really want to hit your dad below the belt, tell him that Alice Cooper, that drunken freak with the makeup, could play him this Saturday on the golf course and take him apart on the green.”
It was the lowest punch you could have thrown.

Look forward to great fortune and a new lease on life!
Courtesy is the password to safety.
Your moods signal a period of change.
More Fortunes >