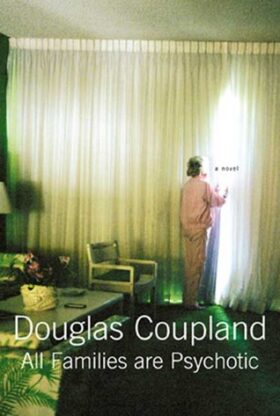 All Families are Psychotic

Synopsis: The most disastrous family reunion in the history of fiction. The Drummond family descends upon the state of Florida, cutting a swath through Disney World, Cape Canaveral, the swamps and the highways, gathering to watch the launch into space of their beloved daughter and sister, Sarah. What should be a cause for celebration becomes instead the impetus for a series of mishaps and coincidences that place them in constant peril. In a family where gunplay, black market negotiations and kidnapping are all part of an afternoon in the sun, you can only imagine what happens when things take a turn for the worse. As the family spins dangerously out of control, the story unfolds at a lightning-fast pace. With one plot twist after the other, the Drummonds fall apart and come together in the most unexpected ways.

Declassified by Agent Palmer: Coupland’s ‘Psychotic’ family portrait is as real as it is unflattering

‘Wade, I’m not a saint. I’ve been holding stuff inside me for decades — girls my age were trained to do that, and it’s why we all have colitis. Besides, a dash of spicy language is refreshing every so often…”

Life seemed to be entirely about scrimping.

Wade felt that at a certain point in their lives, most people passionately assess what they have and what they lack — and then go about making the best of it — like an actor who goes from playing leads to playing character roles; like the party girl who goes from being a zany kook to being a cautionary tale for the younger girls.

‘Life is boring. People are vengeful. Good things always end. We do so many things and we don’t know why, and if we do find out why, it’s decades later and knowing why doesn’t matter any more.’

‘All families are psychotic, Wade. Everybody has basically the same family — it’s just reconfigured slightly different from one to the next.’

Wade tried to imagine Florida before the advent of man, but couldn’t. The landscape seemed too thoroughly colonized — the trailers, factory outlets and cocktail shacks of the world below. He decided that if human beings took over the moon, they’d probably just turn it into Florida. It was probably for the best it was so far away, unreachable.

Where did the past six minutes go? When time is used up, does it go to some kind of place like a junkyard? Or down a river like the waters beneath Niagara Falls? Does time evaporate and turn into rain and start all over again?

There are simply these things that need to be done, and it’s simpler to do them than to not do them.

‘Is she street smart?’
Janet considered this. ‘Even if you’re an astronaut I supposed there’d have to be some degree of treachery and backstabbing you’d have to confront. If nothing else, think of the hundreds of people who weren’t picked for the shuttle flight.’ She lapsed into her familiar educational mode. ‘But you know, they choose astronauts for evenness of personality the way breeders choose dogs — astronauts are like the black labs of the aerospace world.’

Our lives are geared mainly to deflect the darts thrown at us by the laws of probability. The moment we’re able, we insulate ourselves from random acts of hate and destruction. It’s always been there — in the neighborhoods we build, the walls between our houses, the wariness with which we treat the unknown. One person in six million will be struck by lightning. Fifteen people in a hundred will experience clinical depression. One woman in sixteen will experience breast cancer. One child in 30,000 will experience a serious limb deformity. One American in five will be victim of a violent crime. A day in which nothing bad happens is a miracle, a day in which all the things that could have gone wrong didn’t. The dull day is a triumph of the human spirit, and boredom is a luxury unprecedented in the history of our species.

All you can get out of a place like this is a creepy little tingle that lets you know your kid is never going to be anything more than a customer — that the whole world is being turned into a casino.

‘It’s a recurring theme in my life — police cruisers pulling up the driveway — it’s how periods in my life begin and end.’

‘Lately I’ve started to think that blame is just a lazy person’s way of making sense of chaos.’

I’m not alert enough; I’m not paying close enough attention. Dammit, I spend my whole life looking and looking and looking at the world, but I guarantee it, the moment I move my head away from this patch of tar will be the exact moment the earth cracks open — and if I’d been watching, for just that one second, I’d have see the core of the planet, molten and white–’

‘People are pretty forgiving when it comes to other people’s family. The only family that ever horrifies you is your own.’

‘Dear,’ said Janet, ‘your past isn’t something you escape from. Your past is what you are.’

‘As far as I can see, Janet, life is just an endless banquet of loss, and each time a new loss is doled out, you have to move your mental furniture around, throw things out, and by then there’s more loss, and the cycle goes on and on.’

She thought about the way that all the truths she’d been taught to consider valuable invariably conflicted with the world as it was actually lived.

To let another into your heart, first let yourself in.
Look forward to great fortune and a new lease on life!
Your moods signal a period of change.
More Fortunes >