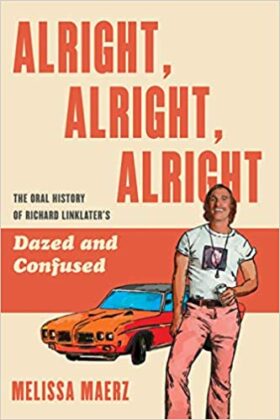 Tagline: The Oral History of Richard Linklater’s Dazed and Confused

Synopsis: To some, that might not even sound like a movie. But to a few studio executives, it sounded enough like the next American Graffiti to justify the risk. Dazed and Confused underperformed at the box office and seemed destined to disappear. Then something weird happened: Linklater turned out to be right. This wasn’t the kind of movie everybody liked, but it was the kind of movie certain people loved, with an intensity that felt personal. No matter what their high school experience was like, they thought Dazed and Confused was about them.

Alright, Alright, Alright is the story of how this iconic film came together and why it worked. Combining behind-the-scenes photos and insights from nearly the entire cast, including Matthew McConaughey, Parker Posey, Ben Affleck, Joey Lauren Adams, and many others, and with full access to Linklater’s Dazed archives, it offers an inside look at how a budding filmmaker and a cast of newcomers made a period piece that would feel timeless for decades to come.

…he’s the master of exploring the concept of nostalgia in his films, but he often seems actively intellectually opposed to the very idea of it.

That’s just the way nostalgia works: It is not a collection of memories, but a reinvention of memory itself. It’s misremembering your own life on purpose.

In the face of all logic, Linklater emerged with a movie that perfectly captured the moment-to-moment reality of being a teenager, and somehow also achieved precisely what Universal had signed him to create: a classic film that makes every new audience feel good about the worst time of their lives.

This movie is a period piece, but the period isn’t the ‘70s–it’s the period in everyone’s life from age 14 to 17. That’s why so many people consider it their favorite movie, and it explains why it holds up over multiple viewings: everyone who sees Dazed and Confused thinks it’s about them. The experience is illogically personal. We watch it, and we feel what anyone who’s ever been a teenager wants to feel. We feel seen.

Heyd Fontenot: I think that’s part of why people still love that movie. We spend the rest of our lives trying to figure out the first 18 years.

Joey Lauren Adams: You know how characters in movies have origin stories? For a lot of us, getting cast in Dazed and Confused is our origin story.

Sasha Jenson: there was a lot of stereotypical casting in movies. It was like, you’re the fat kid, or you’re the character kid. And Dazed kind of fuzzed the edges. No one really fit into the John Hughes role, or the traditional high school jock role. Everything was a bit more textured. So, honestly, at that time I was like, I don’t know if this movie will ever be seen! Because none of us were archetypal characters. We were just real.

Sasha Jenson: For me, talking about that summer feels like the same as if you were in the schoolyard with your friends many years ago and you were just playing around with a bunch of people, and you never really paid attention to the moment, because it didn’t feel special at the time. And then many years later, people were like, “Remember when you were on the swing set? That was so awesome!” And you’re just like, “Huh?”

Tom Junod: My generation was guilty of nostalgia way before they got old. I was class of 1976. When I think of my own experience in the ‘70s, it’s like, Happy Days was on. Sha Na Na was an act that people my age went and paid money for, even though it did not in any way memorialize their own time. American Graffiti was a really popular movie with people who graduated in 1976 rather than in 1962. And it was the same way with Dazed being popular with people who graduated in the ‘90s.

Richard Linklater: I think teenagers are looking to escape the misery of their own time, whatever that time is. It’s like, “It had to have been better back then.”

Richard Linklater: I’d stand on the set and see people in the flare pants and the shirts, and the girls dressed a certain way and the music, and it was like, “Oh my god. I’ve re-created my high school.” It sent a shiver down my spine.

Ethan Hawke: There are very few artists who come to the arts with the mind-set of an athlete, but baseball is the key to understanding Rick. At its core, baseball is a very zen game–it’s patience intersecting with spontaneity–and Rick is the most naturally zen person I’ve ever met. He is genuinely present. He invites actors to offer their true self, and in return, he gets the best of them. I’m not saying he sits around reading the Dhammapada or the Tao Te Ching. He’s just slightly detached, and he observes.

Tom Pollack: There was a lot of talking about sex in Dazed, but not much actually seeing it.

Wiley Wiggins… Traditionally, teen movies are exploitation movies, right? People watch them because they have this fantasy of teenage sexuality. But actually teenage sexuality is an unglamorous thing, and it mostly just happens in your mind.

One of the reasons people still love to watch Dazed and Confused is that it transports you back in time–not just to 1976, but also to 1992. You can return to the days when Ben Affleck still had baby fat and Parker Posey still smacked her gum. We get older. They stay the same age. The cast is forever preserved on-screen at a movement of infinite potential, one of the last moments before they’d have to start acting less like regular goofballs and more like movie stars. “We went into the movie a bunch of kids, and we came out a lot more mature,” says Jason London. “It was the beginning of us becoming adults.”

Unlike most high school moves, no lessons are learned in Dazed, and no lives are changed. For most of the movie, the characters aren’t thinking about much beyond whatever’s going to happen that night. The idea that this moment is somehow meaningful is never considered. But when they drive off to get Aerosmith ticked in the final scene, it still feels poignant–maybe not to Pink (Jason London) and his friends, but to the viewers, because we know what the characters don’t: These kids can never go back. A party that seems forgettable when you’re 17 eventually becomes a night you can only hope to remember.

Richard Linklater: If you have friends who are writers, buckle up. You’re going to find yourself as some kind of a character in someone else’s story, and it can be unnerving, how you’re characterized in someone else’s thing. We’re all aghast when we see what a small part we play in other people’s lives. We’re all the lead character in our own lives, and we’re only supporting characters in other people’s lives, and that hurts. That’s the dilemma we all live with.

Richard Linklater: Cinema can’t help but glamorize. Cinema doesn’t give a shit if you’re nostalgic or not. It’s a nostalgia creator.

Fame and fortune are coming your way.
Courtesy is the password to safety.
Sharing little joys offer great hope to others.
More Fortunes >