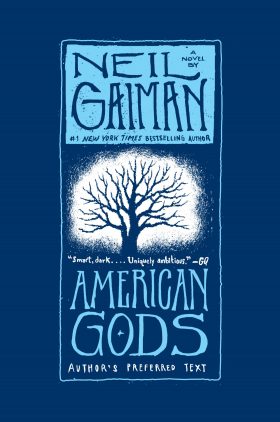 Synopsis: Shadow is a man with a past. But now he wants nothing more than to live a quiet life with his wife and stay out of trouble. Until he learns that she’s been killed in a terrible accident.

Flying home for the funeral, as a violent storm rocks the plane, a strange man in the seat next to him introduces himself. The man calls himself Mr. Wednesday, and he knows more about Shadow than is possible.

He warns Shadow that a far bigger storm is coming. And from that moment on, nothing will ever be the same…

Declassified by Agent Palmer: American Gods by Neil Gaiman Should be Required Reading for Everyone

“… Information and knowledge: two currencies that have never gone out of style.” [Wednesday]

“Tell him that we have reprogrammed reality. Tell him that language is a virus and that religion is an operating system and that prayers are just so much fucking spam.”

“Too much talking these days. Talk talk talk. This country would get along much better if people learned how to suffer in silence.” [Wednesday]

“Gods die. And when they truly die they are unmourned and unremembered. Ideas are more difficult to kill than people, but they can be killed, in the end.”

Zorya Utrennyaya found an empty ash tray and placed it beside Czernobog. “How do you want your coffee?” she asked her guests. “Here we take it black as night, sweet as sin.”

“You’re fucked up, Mister. But you’re cool.”
“I believe that’s what they call the human condition,” said Shadow.

“Mostly you are what they think you are…”

“Personally–and this is speaking as a Scientific American, here– I feel very sorry for the professionals whenever they find another confusing skull, something that belonged to the wrong sort of people, or whenever they find statues or artifacts that confuse them–for they’ll talk about the odd, but they won’t talk about the impossible, which is where I feel sorry for them, for as soon as something becomes impossible, it slipslides out of belief entirely, whether it’s true or not.” [Mr. Ibis]

“Of course they do. There’s never been a true war that wasn’t fought between two sets of people who were certain they were in the right. The really dangerous people believe that they are doing whatever they are doing solely and only because it is without question the right thing to do. And that is what makes them dangerous.” [Wednesday]

(“What I say is, a town isn’t a town without a bookstore. It may call itself a town, but unless it’s got a bookstore, it knows it’s not fooling a soul”). [Hinzelmann]

“Like the newspapers used to say, if the truth isn’t big enough, you print the legend. This country needs its legends. And even the legends don’t believe it anymore.” [Wednesday]

“I can believe things that are true and things that aren’t true and I can believe things where nobody knows if they’re true or not. I can believe in Santa Claus and the Easter Bunny and the Beatles and Marilyn Monroe and Elvis and Mister Ed. Listen – I believe that people are perfectible, that knowledge is infinite, that the world is run by secret banking cartels and is visited by aliens on a regular basis, nice ones that look like wrinkled lemurs and bad ones who mutilate cattle and want our water and our women. I believe that the future sucks and I believe that the future rocks and I believe that one day White Buffalo Woman is going to come back and kick everyone’s ass. I believe that all men are just overgrown boys with deep problems communicating and that the decline in good sex in America is coincident with the decline in drive-in movie theaters from state to state. I believe that all politicians are unprincipled crooks and I still believe that they are better than the alternative. I believe that California is going to sink into the sea when the big one comes, while Florida is going to dissolve into madness and alligators and toxic waste. I believe that antibacterial soap is destroying our resistance to dirt and disease so that one day we’ll all be wiped out by the common cold like martians in War of the Worlds. I believe that the greatest poets of the last century were Edith Sitwell and Don Marquis, that jade is dried dragon sperm, and that thousands of years ago in a former life I was a one-armed Siberian shaman. I believe that mankind’s destiny lies in the stars. I believe that candy really did taste better when I was a kid, that it’s aerodynamically impossible for a bumblebee to fly, that light is a wave and a particle, that there’s a cat in a box somewhere who’s alive and dead at the same time (although if they don’t ever open the box to feed it it’ll eventually just be two different kinds of dead), and that there are stars in the universe billions of years older than the universe itself. I believe in a personal god who cares about me and worries and oversees everything I do. I believe in an impersonal god who set the universe in motion and went off to hang with her girlfriends and doesn’t even know that I’m alive. I believe in an empty and godless universe of causal chaos, background noise, and sheer blind luck. I believe that anyone who says sex is overrated just hasn’t done it properly. I believe that anyone who claims to know what’s going on will lie about the little things too. I believe in absolute honesty and sensible social lies. I believe in a woman’s right to choose, a baby’s right to live, that while all human life is sacred there’s nothing wrong with the death penalty if you can trust the legal system implicitly, and that no one but a moron would ever trust the legal system. I believe that life is a game, that life is a cruel joke, and that life is what happens when you’re alive and that you might as well lie back and enjoy it.”

The Tonight Show finished. An episode of Cheers began. Shadow had never watched Cheers. He had only ever seen one episode of it–the one where Coach’s daughter comes to the bar–although he had seen that several times. Shadow had noticed that you only ever catch one episode of shows you don’t watch, over and over, years apart; he thought it must be some kind of cosmic law.

We do not always remember the things that do no credit to us. We justify them, cover them in bright lies or with the thick dust of forgetfulness.

They tried to stand off the soldiers, but the men fired and killed them both. So the song’s wrong about the jail, but that’s put in for poetry. You can’t always have things like they are in poetry. Poetry ain’t what you’d call truth. There ain’t room enough in the verses.
-a singer’s commentary on “The Ballad of San Bass,” in A Treasury of American Folklore

“This is a bad land for gods, said Shadow. As an opening statement it wasn’t Friends, Romans, countrymen, but it would do. “You’ve probably all learned that, in your own way. The old gods are ignored. The new gods are as quickly taken up as they are abandoned, cast aside for the next big thing. Either you’ve been forgotten, or you’re scared you’re going to be rendered obsolete, or maybe you’re just getting tired of existing in the whim of people.” [Shadow]

He wondered whether home was a thing that happened to a place after a while, or if it was something that you found in the end, if you simply walked and waited and willed it long enough. [Shadow]