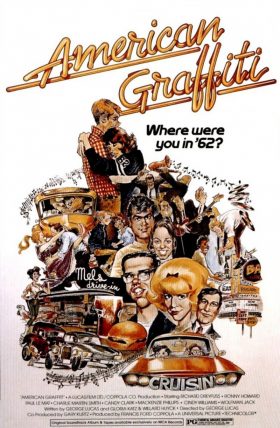 Synopsis: A couple of high school grads spend one final night cruising the strip with their buddies before they go off to college.

Declassified by Agent Palmer: Down on Paradise Road: American Graffiti is a Timeless Period Piece of Cars, Music, and Youth

“Sneakin’ around with the Wolfman, baby. This is gonna strike a raw nerve, Mama. Here’s The Platters.”

“We’re finally getting out of this turkey town, and now you wanna crawl back into your cell, right? You wanna end up like John? You just can’t stay 17 forever.”

“The Wolfman is everywhere. I can’t talk for the Wolfman, but I can tell you one thing. If the Wolfman was here, he’d say: ‘Get your ass in gear!’ The Wolfman comes in here occasionally bringing tapes, you know, to check up on me, what-not. And the places he talks about that he’s been. The things he’s seen. There’s a great big beautiful world out there. And here I sit sucking on popsicles.”

“You’re the most beautiful, exciting thing I’ve ever seen in my life and I don’t know anything about you.”

“I don’t like that surfin’ shit. Rock and roll’s been going down hill ever since Buddy Holly died.”

“It doesn’t make sense to leave home to look for home, to give up a life to find a new life, to say goodbye to friends you love just to find new friends.”

Let’s finish this up now, someone is waiting for you on that.
Fame and fortune are coming your way.
A difference, to be a difference, must make a difference.
More Fortunes >