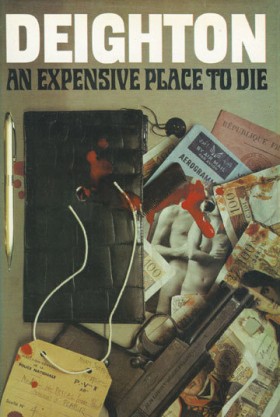 An Expensive Place to Die

Synopsis: A ‘clinic’ on Paris’s Avenue Foch designed to cater lavishly for multiple perversions, staffed by a group of sexually and intellectually high-powered girls and equipped with devices ranging from an Iron Maiden to psychedelic truth-drugs – that’s the set-up operated by the enigmatic Monsieur Datt.

Naturally, it has a hidden purpose: to compile dossiers of tape and film on influential political clients from East and West. Into this twilight world of decadence and hidden motives come the agents of four world powers.

Are they after Datt’s pornographic blackmail dossiers? Or is their purpose altogether more deadly than a trip to the blue movies…?

Declassified by Agent Palmer: Deighton delivers another wonderful espionage hero in An Expensive Place to Die

The birds flew around for nothing but the hell of it. It was that sort of spring day: a trailer for the coming summer. Some birds flew in neat disciplined formations, some in ragged mobs, and higher, much higher flew the loner who didn’t like corporate decisions.

“I don’t know what you do all day,” he said. “Whatever do you find to do?”
“I do nothing all day except make coffee for people who wonder what I do all day.”

‘It was a large black case and contained reams of reports. One of them he passed across to me.
“Read it while I’m here. I can’t leave it.”
“It’s secret?”
“No, our document copies has gone wrong and it’s the only one I have.”

“Precisely,” said Byrd. “That’s the whole idea of English. Foreigners can communicate information to us but Englishmen can still talk together without an outsider being able to comprehend.”

“There is no training for a painter. No more than there is training for life. A man makes as statement as he is able.”

“The pursuit of pleasure,” said Datt, “is a pitfall-studded route.”

“Quite so. You are a sensible man. It’s madness to go everyday to work at something you do not enjoy.”

“It is the journey that is holy and so it is to Existentialists: life is more important than death. Whatever they do, men are too anxious to get to the end. The sex act, eating a fine meal, playing golf, there is a temptation to rush, gobble, or run. That is foolish, for one should move at a relaxed pace through life doing the work one enjoys instead of chasing ambition helter-skelter, pursuing one’s ultimate death.”

“I have gained my present powerful position by always taking ten percent more authority than I am given.”

“Ah, lusty May is again burning,
A sin born of a virgin’s kiss:
Sweet tears tempt me, always tempt me
To feel between her breasts with my lips.

“Here life is as eternal as death,
As the trembling happiness on a wedding night;
If she is not a rose, rose all white,
Then she must be redder than the red of blood.”

Her face was kind but had the sort of wrinkles that come when you have smiled cynically about 10 million times.

“I don’t know them well enough to dislike them,” I explained.

How can a woman compete with a man’s work? Work is abstract and intangible, hypnotic and lustful; a woman is no match for it.

“The idea of being remembered after death becomes important as one gets old.”

The bell rang. There was a girl standing there. She may have been twenty-five but it was difficult to say. Big cities leave a mark. The eyes of city dwellers scrutinize rather than see, they assess the value and the going rate and try to separate the winners from the losers. That’s what this girl tried to do.

Good-bye, Annie, I thought. I didn’t know you but I know you now as well as anyone knows me. You won’t retire to a little tabac in Nice and get a monthly check from some phony Insurance Company. No, you can be resident agent in hell, Annie, and your bosses will be sending directives from heaven telling you to clarify your reports and reduce your expenses.

“Paris is a woman with a little too much alcohol in her veins. She talks a little too loud and thinks she is young and gay. But she has smiled too often at strange men and the words ‘I love you’ trip too easily from her tongue. The ensemble is chic and the paint is generously applied but look closely and you’ll see the cracks showing through.”

To know all is to forgive nothing.

“Painting is the only true magic,” said Byrd. “Translating three dimensions into two–or if you are a master, four.”

Jean Paul knew that no woman could be trusted. They consumed one, devoured one, sapped one’s strength and confidence and give no reassurance in return. The very nature of women made them his . . . was enemy too strong a word? He decided that enemy wasn’t too strong a word. They took away his manhood and yet demanded more and more physical love. Insatiable was the only word for them. The other conclusion was not worth considering–that his sexual prowess was under par. No. Women were hot and lustful and, if he was truthful with himself, evil. His life was an endless struggle to quench the lustful fires of the women he met. And if he ever failed they would mock him and humiliate him. Women were waiting to humiliate him.

He smiled again. “Good coffee.”
“That’s what they all say,” I said.

“I don’t know how you think of all these questions. You must be clever.”

“That’s the trouble with questions. You’d better stick to answers.”
“Oh, I know all the answers.”
“Then you must have been asked all the questions.”
“I have,” she agreed.

“The body and the mind. The interaction of these two opposing forces; body and mind, emotion and reason, the duality of nature. My ambition has always been to discover something new about man himself.”

“There were disillusions, of course, but a man’s failings are so much more attractive than his successes. Any woman will tell you that.”

Datt smiled complacently. “It’s vital and important work showing men the power they have within their own minds if they merely take courage enough to use it.”

Was she treacherous, or was she exploited, or was she, like most of us, both?

“But the plans changed. Plans often do, that’s what gives us so much trouble, eh?”

“All over the world people are personally opposing things they think are bad, but they do them anyway because a corporate decision can take the blame.”

“You were too cynical,” said Byrd. “I should have expected you to crack.” He stared at me. “Cynics are disappointed romantics, they keep looking for someone to admire and can never find anyone. You’ll grow out of it.”
“I don’t want to grow out of it,” I said.
“Nor did any of us,” he said.

Datt offered me his cigarettes. He said, “A mistake. A silly mistake. Do you ever make silly mistakes?”
I said, “It’s one of my very few creative activities.”

“There is no rule book that can be consulted on these matters whatever the Church and the politicians and the lawyers tell us. Police forces, governments, and armies are just groups of men. Each man must do as his conscience dictates. A man doesn’t obey without question, or he’s not a man anymore.”