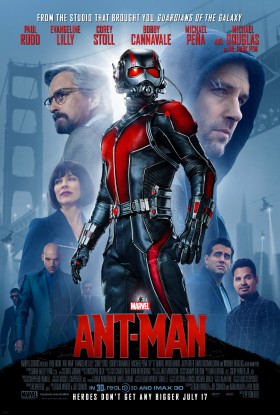 Tagline(s): Heroes don’t get any bigger.
No shield. No armor. No problem.

Based On: The Ant-Man Comic Book by Stan Lee, Larry Lieber, and Jack Kirby

Synopsis: Armed with a super-suit with the astonishing ability to shrink in scale but increase in strength, cat burglar Scott Lang must embrace his inner hero and help his mentor, Dr. Hank Pym, plan and pull off a heist that will save the world.

Declassified by Agent Palmer: Ant-Man is What I have come to Expect from a Marvel Origin Film

Scott Lang: My days of breaking into places and stealing shit are over! What do you need me to do?
Hank Pym: I want you to break into a place and steal some shit.
Scott Lang: makes sense.

Hank Pym: Scott, I’ve been watching you for a while, now. You’re different. Now, don’t let anyone tell you that you have nothing to offer.

Yellowjacket: I am going to disintegrate you!
Siri: Playing Disintegration by The Cure.

Scott Lang: Wait I didn’t steal anything! I was returning something I stole!

Hope Van Dyne: The suit has power, and you have to learn how to control it… and these are your greatest allies.

Scott Lang: Sorry I’m late, I was saving the world. You know how it is.

Scott Lang: I think we should call the Avengers.

Sam Wilson: I know a guy.

Hank Pym: Scott, I need you to be the Ant-Man.
Scott Lang: One question… Is it too late to change the name?

Hank Pym: Second chances don’t come around all that often. I suggest you take a really close look at it. This is your chance to earn that look in your daughter’s eyes, to become the hero that she already thinks you are.

Good clothes open many doors. Go Shopping.
You are interested in higher education, whether material or spiritual.
Things are turning for the bright side.
More Fortunes >