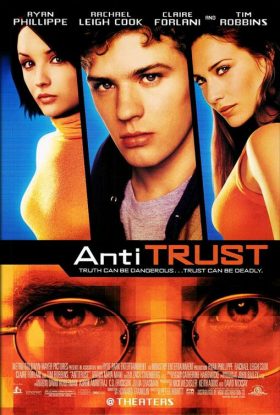 Tagline(s): Truth can be dangerous… Trust can be deadly.
Who’s watching you?
A good idea can get you millions. A great Idea can get you killed.
Trust is not an option.

Synopsis: A computer programmer’s dream job at a hot Portland-based firm turns nightmarish when he discovers his boss has a secret and ruthless means of dispatching anti-trust problems.

Declassified by Agent Palmer: Antitrust still presents Argument that is Anything but Binary

Gary Winston: “What would you do with a billion dollars Milo? ”
Milo Hoffman: “Mmm I don’t know…”
Gary Winston: “I’ll tell you what you could do. You could take that money and put it back into technology, education and the arts. You can transform culture. I found the opera company, symphony orchestras, museums, theatres, steels… I have donated thousands of computers to schools throughout the country. The question really is, how many of the people you share discoveries with will be altruistic? and how many will make fortunes of your generosity?” Gary

Larry: We don’t take anything seriously, unless it’s on a hard drive.

Inspector: [looking for fingerprints on a keyboard] Dust the colon and the backslash key! Only geeks use those keys.

Whoever wants to reach a distant goal must take small steps.
Your moods signal a period of change.
Even a broken clock is right two times a day.
More Fortunes >