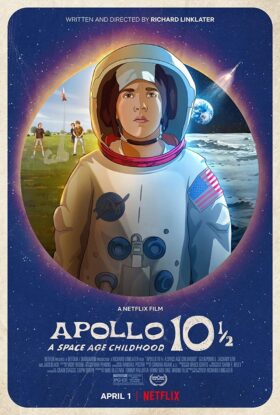 Synopsis: Houston, Texas, 1969. The triumphant moment of the first moon landing comes to life through the eyes of a boy with intergalactic dreams of his own.

Stan: I was just wondering why he couldn’t be an astronaut or something actually cool.
Mom: Honey, not everyone gets to be an astronaut. Everyone does their part, and it takes a lot of people. Including your father. Got it?
Stan: Got it.
Mom: Good.

My grandparent’s reaction to havin’ lived through the Depression was to feel it was goin’ to happen again at any moment… They saved everything that had the slightest value and reused everything they could… They even reused paper towels, which begged the question, what the hell’s the point of a paper towel as opposed to, like, a rag? But none of us ever said anything. – Stan’s narrator

…the future was often terrifying. We were told that if everything continued as it was going, we’d be knee-deep in trash and wearing gas masks just to breathe. They actually did a great job of scarin’ the hell out of everyone. It must’ve worked. President Nixon signed the Clean Air Act and the Clean Water Act, and it soon became unacceptable to litter.

…the world was changing and so was how we saw ourselves in it. When Apollo 8 snapped the famous Earthrise photo over the moon on Christmas Eve, it gave us Earthings a perspective we’d never had. There we were, all together on this floating blue ball in space. It was said that someday soon, when humans fully grasped what this meant, there would be a shift in consciousness, and there would be no more wars.

Science class was so exciting because it felt like current events. It was all astronomy, cosmology, and Apollo related.

One of the downsides to bein’ a kid during this era was they still thought it was a great idea to train children like they were animals, which required constant reminders of what was incorrect conduct. You were always one little screw-up away from a beating from any number of the adults in your life. Parents, principals, coaches, even your friends’ parents who had these convenient “You can paddle my kid and I can paddle yours” agreements.

Over 400,000 people world on the Apollo Space program, more than 600 million people around the world watched the first moonwalk on television. From 1969 through 1972 twelve men (and one kid) walked on the moon. No one has been back… Yet.

Bostick: We accidentally built the lunar module a little too small. But we’re not gonna let that set us back.
Stan: How’d that happen?
Bostick: Are you good at math?
Stan: Yeah.
Bostick: Do you get a perfect 100 on every test?
Stan: No.
Bostick: Okay.

Grown Up Stan: I guess I was what you’d call a fabulist, which is just a nicer way of saying persistent liar.

Even a broken clock is right two times a day.
Sharing little joys offer great hope to others.
Even the greatest of whales is helpless in the middle of a desert.
More Fortunes >