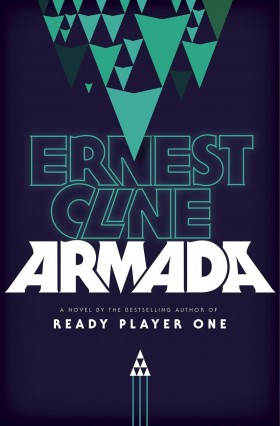 Synopsis: Zack Lightman has never much cared for reality. He vastly prefers the countless science-fiction movies, books, and video games he’s spent his life consuming-and too often he catches himself wishing that some fantastic, impossible, world-altering event could arrive to whisk him off on a grand spacefaring adventure.

So when he sees the flying saucer, he’s sure his years of escapism have finally tipped over to his psychosis.

Especially because the alien ship he’s staring at is straight out of his favorite video game, a flight simulator called Armada-in which gamers just happen to be protecting Earth from alien invaders.

As impossible as it seems, what Zack’s seeing is all too real. And it’s just the first in a blur of revelations that will force him to question everything he thought he knew about Earth’s history, its future, even his own life-and to play the hero for real, with humanity’s fate in the balance.

But even through the terror and exhilaration, he can’t help thinking: Doesn’t something about this scenario feel a little bit like… well… fiction?

Declassified by Agent Palmer: Ernest Cline does it again with pop culture-filled ‘Armada’

“The only legitimate use of a computer is to play games.” – Eugene Jarvis, creator of Defender

If there was a bright center to the universe I was on the planet it was farthest from. Please pass the blue ilk, Aunt Beru.

If there were other civilizations out there, why would they ever want to make contact with humanity? If this was how we treated each other, how much kindness could we possibly show to some race of bug-eyed beings from beyond?

Ray seemed to subsist primarily on a diet of high-fructose junk food and old videogames. It was hard not to love the guy.

Ray once told me that he operated Starbase Ace “for kicks.” Adter making a boatload of dough on tech stocks during the dot-com boom, he now wanted to enjoy his early retirement at the helm of his own private nerd lair, where he got to spend all day playing and talking about videogames with his like-minded clientele.

“Did you finally make a decision?” she asked, eyeing me.
“You mean, did I decide what I want to do with the rest of my life?”
She nodded. I took a deep breath and said the first thing that came to mind.
“Well, I have though about this quite a bit, and after careful consideration, I’ve decided that I don’t want to buy anything, sell anything, or process anything.”

“I’m not saying that you have to go to college, honey. Join a monastery! Join the Peace Corps! Jing the fucking X-Men–I don’t care what you do, as long as you do something. Okay?”

I often tried to calm myself with Yoda’s voice (which sounded nothing like Fozzie Bear, damn you) during moments of distress. Obi-Wan or Qui-Gon or Mace Windu sometimes had calming movie-quote wisdom to share too.
That was only on good days, of course. On bad ones, I found myself drawing on equally compelling advice from Lords Vader or Palpatine.

“Welcome to Crystal Palace,” Ray said. “That’s the EDA’s code name for this place.”
“Why?” I asked.
He shook his head. “Because it’s easier to say than ‘Earth Defence Alliance Strategic Command Post Number Fourteen,'” he said. “Sounds cooler, too.”

I wasn’t a soldier. I was just a kid from the suburbs who played a shitload of videogames. I wasn’t prepared to fight an interplanetary war!

“Hi there, Milo,” I said, reaching over to offer him my hand. “How goes it?”
He just stared at my hand without replying, until I finally shrugged and lowered it.
“Oh, ignore him–he’s from Philly,” Debbie said, as if that explained his rude behavior.

Whoever wants to reach a distant goal must take small steps.
To let another into your heart, first let yourself in.
A difference, to be a difference, must make a difference.
More Fortunes >