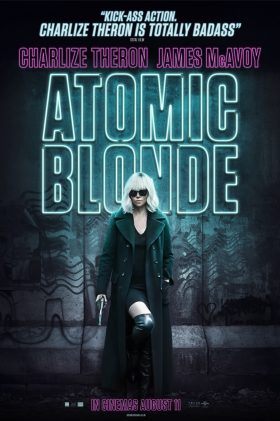 Tagline: Talents can be overrated.

Based On: The Coldest City by Antony Johnston and Sam Hart

Synopsis: An undercover MI6 agent is sent to Berlin during the Cold War to investigate the murder of a fellow agent and recover a missing list of double agents.

Declassified by Agent Palmer: Special Bulletin for Spy Aficionados: Atomic Blonde is a Must See Film.

David Percival: There’s only one question left to ask. Who won? And what was the fucking game anyway?

Lorraine Broughton: Did you really think I was going to give you that list?… Before you die, I want you to get this through that thick, primitive skull. I never worked for you. You worked for me… Every false intel I gave you, a rip in the iron curtain. Every piece of intel you gave me, a bullet in my fucking gun. I want my life back.

David Percival: “It’s a double pleasure to deceive the deceiver.”

Lorraine Broughton: You know those movies where the picture just starts to slow down… and melt? Then catch fire? Well, that’s Berlin.

David Percival: So, what have I learned after all this time? After all the sleepless nights, lying to friends, lovers, myself? Playing this crooked game in this crooked town filled with backstabbers and four-faced liars? I’ll tell you what I’ve learned. One thing and one thing only. I fucking love Berlin!

David Percival: Ironic. The news will tell them there will be no more secrets. But you and I, we both know that’s not true. This world is run on secrets.

Delphine Lasalle: When you tell the truth, you look different. Your eyes change.
Lorraine Broughton: Thanks for the warning.