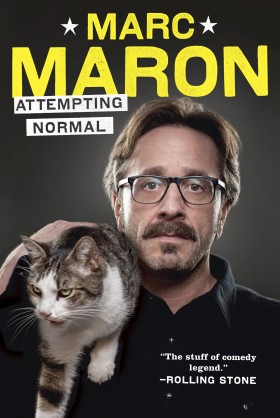 “Notebooks. There are dozens of notebooks. I always carry notebooks with me. I scribble in them in a barely readable scrawl, I do not write jokes. I write moments. Thoughts. Fragments that I have to sweat over as if they’re cryptic texts in a lost language when I try to interpret them. That shouldn’t be part of my process — decoding my own writing — but it has been for my entire life. What does that say about me? Why can’t I make it easy? I need to complicate everything to protect myself from the success and to remain complicated and overwhelmed.”

“We’re built to deal with shit. We’re built to deal with death, disease, failure, struggle, heartbreak, problems. It’s what separates us from the animals and why we envy and love animals so much. We’re aware of it all and have to process it. The way we each handle being human is where all the good stories, jokes, art, wisdom, revelations, and bullshit come from.”

“Conan [O’Brien] said something about the secret of his success: ‘Get yourself in a situation where you have no choice.’”

“I was alone in a world with no definition, surrounded by the clutter of purpose. My life has been a series of attempts at creating a self that fit somewhere, that engaged easily with others, that people liked or could at least see. Something defined. I fed on the acknowledgement, approval, and acceptance of others. Then I resented people for accepting the charade.”

“We all have the right to cherry-pick the advice given us in order to do exactly what we wanted to do in the first place.”

“Charm goes a long way in the liberal arts.”

“…information that I could enter into my emotional abacus. I’m always moving the beads around trying to figure out who I am.”

“A bite from a stunning dog doesn’t hurt any less. It’s actually worse because you have to defer your pain to the privilege of owning a champion. You just have to suck it up. This dynamic also applies to living with beautiful women.”

“That is the power beautiful women have: They are portals into the timeless, into other worlds.”

“…be careful not to medicate bitterness because you’ve mistaken it for depression, because the truth is, you’re right: Everything does suck most of the time and there’s a fine line between bitterness and astute cultural observation.”

“The other thing I learned about show business recently is the difference between art and entertainment. Sometimes they meet but not usually.”

“an animal fable about humility. If you survive your mistake, you must learn from it. Accept that you’re fragile, vulnerable and sometimes stupid. Realize that you’re not immortal and you’ve got to take care of yourself. And then laugh it off and fly away.”

“Planned obsolescence has forever denied us the ability to believe in workmanship, institutions, and lifetime guarantees. This is true with everything from pants to marriages. And obviously life itself.”

“The point is, maybe I need to re-immerse myself in the fine arts. They’re magic. It doesn’t always work but the good stuff, or at least the stuff that resonates, should engage your heart in a way that can reflect, sate, define, amplify, provoke, or relieve what seems like chaos or confusion in your life. The art allows you to experience it and better understand your own undefined or renegade emotions. Sometimes the art gives you new things to worry about. That’s some good art there.

Then again, maybe I have enough drama in my life.”

“I have no control over the plane or anything else really. I am okay with that. Every bump is not the beginning of the end. I move through it. I deal.”

“Running away works. Sometimes you have to change it up: new people, new restaurants, new Laundromat, new barista, new life. Yeah, the adage is true–that wherever you go, there you are– but you in an entirely new setting is a new you, or at least the old you in a new context, and that’s not nothing.”

“Doing the podcast and listening to comics was saving my life. I realized that is what comedy can do for people.”

“…I am at the top of my game and no one can tell me what to do–I built it myself, I work for myself, I have full creative freedom.”

The path of life shall lead upwards for you.
Even the greatest of whales is helpless in the middle of a desert.
To let another into your heart, first let yourself in.
More Fortunes >