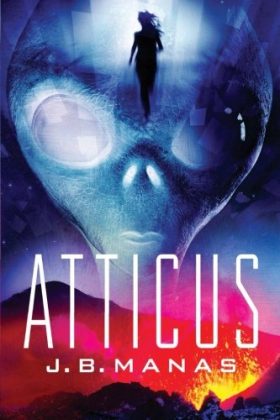 Tagline: Within one man’s past lies the whole world’s future.

Synopsis: Suspended for negotiating with an armed lunatic, rookie cop Marti Coldwater is feeling lost and unappreciated. But her day is about to get a whole lot worse when her car is run off the road by a strange, falling military craft and she rescues the lone passenger–a young British amnesiac who thinks it’s 1944.

Soon, she and her newfound companion are relentlessly pursued by murderous men in suits and a sinister Nordic assassin with a singular mission–capture the stranger and kill anyone who’s seen him.

When she uncovers a plot threatening the entire planet, Marti is thrown into a world of highly classified government programs and astonishing alien secrets. Now, her only hope of saving the world is to try to recover the memories of a man who may be the most dangerous of all–the man who calls himself Atticus.

Atticus was seated beside her, quiet as could be, and Jason sat up front with Frank, arguing over the Phillies of all things. She was surprised Jason even knew anything about sports.

“You’d be surprised. Some of the world’s most advanced and covert operations are run out of people’s homes. Most of the CIA, I’d say.”

“Terrorism?” said Thornton. Judging by his furrowed brow, he was as confused as she was.
“I think we can all agree,” said Atticus, “that nuclear proliferation is a growing threat. Not just from the big players, but from radical countries and terrorists. Maybe not tomorrow, but soon.”

“We’ve lived a long time,” he said to his Klaruvian comrades. “We all know the struggle for good is universal, and not just here on Earth. We’ve tried ourselves, many times. We’ve failed many times. So have the humans. Evil and violence always find a way, but that doesn’t mean we give up and give in.”

Today it’s okay to make a few choices by going with your instincts.
Sharing little joys offer great hope to others.
You are interested in higher education, whether material or spiritual.
More Fortunes >