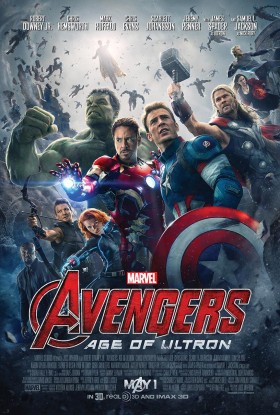 Based On: Based on the Marvel comics by Stan Lee and Jack Kirby

Declassified by Agent Palmer: Avengers: Age of Ultron is a Continuation not a Culmination… Slight Spoiler Warning

Nick Fury: No matter who wins or loses, trouble always comes around.

Clint Barton: Doesn’t matter what you did, or what you were. If you go out there, you fight, and you fight to kill. Stay in here, you’re good, I’ll send your brother to come find you. But if you step out that door, you are an Avenger.

Tony Stark: Does anybody remember when I put a missile through a portal, in New York City? We were standing right under it. We’re the Avengers, we can bust weapons dealers the whole doo-da-day, but how do we cope with something like that?
Steve Rogers: Together.
Tony Stark: We’ll lose.
Steve Rogers: We do that together too.

Ultron: How do you hope to stop me?
Tony Stark: Like the old man said, Together.

Ultron: Stark asked for a savior, and settled for a slave.
The Vision: I suppose we’re both disappointments.
Ultron: I suppose we are.
The Vision: Humans are odd. They think order and chaos are somehow opposites and try to control what won’t be. But there is grace in their failings. I think you missed that.
Ultron: They’re doomed!
The Vision: Yes… but a thing isn’t beautiful because it lasts. It is a privilege to be among them.
Ultron: You’re unbelievably naive.
The Vision: Well, I was born yesterday.

Steve Rogers: You get hurt, hurt ’em back. You get killed… walk it off.

Tony Stark: If I lift it, do I get to rule Asgard?
Thor: Yes, of course.
Tony Stark: I will be fair, but firmly cruel.
Thor: No, I’m sure.

Nick Fury: You’ve come up with some pretty impressive things Stark. War isn’t one of them.

Tony Stark: It’s biometrics, right? Like a security code? “Whoever is carrying Thor’s fingerprints” is, I think, the literal translation.
Thor: Yes, well that’s a very, very interesting theory. I have a simpler one: You are not worthy.
Ultron: Worthy? How could you be worthy? You’re all killers. You want to protect the world, but you don’t want it to change. There’s only one path to peace… your extinction.

Thor: If he can wield the Hammer, he can keep the Stone.

Maria Hill: All set up boss.
Tony Stark: Actually he’s the boss. I just pay for everything and design everything, make everyone look cooler.

Ultron: I’m going to tear you apart… from the inside!

Steve Rogers: Nick Fury, you son of a bitch!
Nick Fury: Whoa ho ho! You kiss your mother with that mouth?

Tony Stark: I tried to create a suit of armor around the world… but I created something terrible.
Bruce Banner: Artificial intelligence…

Natasha Romanoff: Thor, report on the Hulk.
Thor: The gates of Hell are filled with the screams of his victims! But not the screams of the dead, of course. No, no… wounded screams… mainly whimpering, a great deal of complaining and tales of sprained deltoids and… gout.

Tony Stark: What’s the vibranium for?
Ultron: I’m glad you asked that, because I wanted to take this time to explain my evil plan…

Maria Hill: Well, the news is loving you. Nobody else is.

Steve Rogers: Ultron’s calling us out. What are we gonna do?
Nick Fury: Something dramatic, I hope.
Tony Stark: Let’s go give him a fight!

Ultron: Do you see the beauty of it? The inevitability? You rise, only to fall. You, Avengers, you are my meteor. My swift and terrible sword and the Earth will crack with the weight of your failure. Purge me from your computers; turn my own flesh against me. It means nothing! When the dust settles, the only thing living in this world, will be metal.

Tony Stark: Isn’t that the WHY we fight? So we can end the fight and go home?
Natasha Romanoff: Well, you amazingly failed!

Wanda Maximoff: You said… you said we were going to destroy the Avengers… make a better world!
Ultron: It will be.
Wanda Maximoff: When everyone is dead?
Ultron: That is not… the human race will have every oppurtunity to improve!
Wanda Maximoff: And if they don’t?
Ultron: Ask Noah.

Steve Rogers: Ultron thinks we’re monsters, that we’re what’s wrong with the world. This isn’t just about beating him, it’s about whether he’s right.

Tony Stark: Cap, I have to blow up the city!
Steve Rogers: There are still people up here, not to mention us!
Tony Stark: It’s everybody up here, or everybody down there!
Natasha Romanoff: Well, it’s not like we ever had a place in the world…
Nick Fury: The world adjusts, evolves to live with changes.

Ultron: You know what’s in that cradle? The power to make real change, and that terrifies you.
Steve Rogers: I wouldn’t call it a comfort.

Tony Stark: Look, we both know the guy has anger issues. Which, not to point a finger…
Bruce Banner: We told him to solve the world.

Ultron: But I always say, “Keep your friends rich and your enemies rich, and wait to find out which is which.”

James Rhodes: Well, you guys are definitely off the Pentagon’s Christmas list.

Tony Stark: Right in the back? Dick move, Banner.

Wanda Maximoff: Is that why you’ve come, to end the Avengers?
Ultron: I’ve come to save the world! But, also… yeah.

Laura: I’m sorry. Mr. Stark, Clint said you wouldn’t mind but it seems our tractor doesn’t want to start at all. Thought maybe you might…
Tony Stark: Yeah, I’ll give her a kick … Hello, “Deere”. Tell me everything. What ails you.
Nick Fury: Do me a favor. Try not to bring it to life.
Tony Stark: Ms. Barton you little minx. I get it Maria Hill call you, right? Was she ever not working for you?

Steve Rogers: As the world’s expert on waiting too long, don’t. You both deserve a win.

Thor: No one has to break anything.
Ultron, Tony Stark: Clearly you’ve never made an omelet.
Tony Stark: He beat me by one second.

Clint Barton: “Whosoever, be he worthy, shall have the power”, whatever man! It’s a trick!
Thor: It is more than that, my friend!

Tony Stark: It’s the end, the end of the path I started us on.
Natasha Romanoff: Nothing lasts forever.

Ultron: I was designed to save the world. People would look to the sky and see hope… I’ll take that from them first.

Natasha Romanoff: Am I always picking after you boys?

Nick Fury: Here we all are, with nothing but our wit and our will to save the world! So stand and fight!

Tony Stark: No way we all get through this…
Steve Rogers: I got no plans tomorrow night.

Natasha Romanoff: That’s not a question I need answered.

Laura: I see you with the Avengers, and, well…
Clint Barton: You don’t think they need me?
Laura: Actually, I think they do. They’re gods, and they need someone to keep them down to Earth.

Tony Stark: Clint, you’ve had a tough week. We won’t hold it against ya if you can’t get it up.

Steve Rogers: We can still find a better way to achieve peace?
Ultron: I can’t actually throw up in my mouth, but if I could I would do it!

Steve Rogers: I’m only gonna say this once.
Tony Stark: How about “none”-ce?

Tony Stark: This is going to be like finding a needle in the world’s biggest haystack… fortunately, I brought a magnet!

Wanda Maximoff: Ultron can’t see the difference between saving the world and destroying it. Where do you think he gets that?

Clint Barton: The city is flying and we’re fighting an army of robots. And I have a bow and arrow. Nothing makes sense.
Pietro Maximoff: You didn’t see that coming?

Thor: IS THAT THE BEST YOU CAN DO?
Steve Rogers: You had to ask…
Ultron: THIS is the best I can do. This is what I’ve been waiting for. All of you against all of me!

Thor: The girl tried to warp my brain! Take special care, I doubt if humans can keep her at bay! Fortunately, I am mighty…

Steve Rogers: But if you put the hammer in an elevator?
Tony Stark: It’ll still go up.
Steve Rogers: Elevator’s not worthy.

The Vision: Balance is amazing!
Thor: The key is that it’s not too heavy. Gives the swing more power.

Bruce Banner: I could choke the life out of you without changing a shade.

Thor: It is not meant for mortal men.
Stan Lee: Neither was Omaha Beach, blondie! Stop trying to scare us, come on!
Thor: All right.
Stan Lee: Excelsior…

Tony Stark: Is no one going to comment that the Cap just said “language”?
Steve Rogers: I know! It just slipped out

Thor: This may be dangerous…
Erik Selvig: I would be disappointed if it wasn’t.

Ultron: I know you’re good people. I know you mean well. But you just didn’t think it through. There is only one path to peace… your extinction.

Tony Stark: In a world this vulnerable, we need something more powerful than any of us.

Thor: If you believe in peace, then let us keep it.
Ultron: I think you’re confusing ‘peace’ with ‘quiet’.

Thanos: Fine, I’ll do it myself.