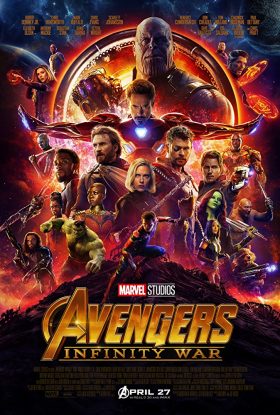 Tagline(s): An entire universe. Once and for all.
Destiny arrives.
Where will you be, when it all ends?

Based On: Marvel Comics

Synopsis: The Avengers and their allies must be willing to sacrifice all in an attempt to defeat the powerful Thanos before his blitz of devastation and ruin puts an end to the universe.

Declassified by Agent Palmer: #ThanosDemandsYourSilence and the MCU Demands Your Respect with Avengers: Infinity War (No Spoilers)

Thanos: I know what it’s like to lose. To feel so desperately that you’re right, yet to fail nonetheless. It’s frightening, turns the legs to jelly. I ask you to what end? Dread it. Run from it. Destiny arrives all the same. And now it’s here. Or should I say, I am.

Rocket Raccoon: You speak Groot?
Thor: Yes, they taught it on Asgard. It was an elective.

Tony Stark: I’m sorry, earth is closed today. You better pack it up and get outta here.

Steve Rogers: New haircut?
Thor: Looks like you’ve copied my beard. By the way, this is a friend of mine, the tree.
Groot: I am Groot!
Steve Rogers: I am Steve Rogers.

M’Baku: This could be the end of Wakanda.
Okoye: Then we shall make it the noblest ending in history.

Thor: Only Eitri the Dwarf can make me the weapon I need. I assume you’re the captain, sir.
Rocket Raccoon: You’re very perceptive.
Thor: You seem like a noble leader. Will you join me on my quest to Nidavellir?
Rocket Raccoon: Ah, let me just ask the captain. Oh, wait a second, it’s me! Yeah. I’ll go.

Thanos: You have my respect, Stark. When I’m done, half of humanity will still be alive. I hope they remember you.

Thor: I bid you farewell and good luck, morons.

Courtesy is the password to safety.
Good clothes open many doors. Go Shopping.
Today it’s okay to make a few choices by going with your instincts.
More Fortunes >