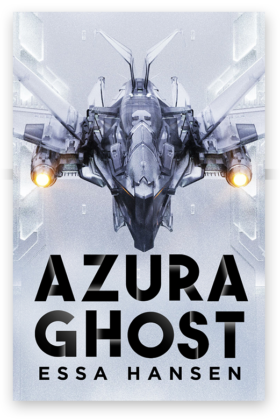 Tagline: Book Two of The Graven

Synopsis: Caiden has been on the run for ten years in order to keep his Graven ship out of the hands of his old adversary, Threi. But when a childhood friend he once thought dead reappears to take it, he is lured into a game of hunter and hunted with the one person whose powers rival Threi’s; his sister, Abriss.

Now to have a fighting chance against the most influential siblings in the multiverse, Caiden is left with no choice. He must unlock the Azura’s true potential—which means finally confronting his own mysterious genetic origins.

To hidden unities and overdue reunions.
To all the luminiferous echoes interacting with us, whether we recognize them or not.

He surveyed himself with distaste, remembering why he scoured so infrequently. The dirt, wounds, and tinier scars returned him to a normal creature. Wear and tear clothed him in some of the humanity he’d lost while embroiled with the Casten.

…Prime was acting natural, even if still driven and burdened by responsibility, by past and future but never the present. Leta found Abriss’s obsessive focus easy to relate to.

“Sacrifice in and of itself doesn’t count as ‘good’–you learned this before. So can you prove you’ve prevented any wrong by running?”
“Back then it was almost glamorous, fighting head-on against a terror that was visible, rather than quietly suffering to keep contained a terror that no one sees.”

“All my theories of chaos tell me to trust inklings like this, a sketched pathway to a specific end. It’s like…a claircognizance…a voice that forms in my head but that sounds like my voice, made up of my thoughts. It assembles the celestial alignments that I see into grand totalities my brain is too limited to fully comprehend, but I get enough to perceive outcomes and the actions required to reach them.”

Events lining up through coincidence …through guided creation… Leta and Caiden brought together…crossing paths for tiny moments in the scope of eternity, to chance the world’s course forever…

…honey tastes sweet even with a swollen cheek.

She wasn’t shaping her own life. Ignorance and lack of choice was the same prison they had both grown up in. A myopic worldview, impoverished imagination, stunted desires.

Us. Trust. Silky words, like hope. It slid easily on the tongue.

Leta grasped deep and slow while sitting upright. Liquid tumbled off her–no, steam, then effervescence, then sparks wriggling into nothing. Every pain had ironed out. Every chord in her tuned. Her sensitive nervous system fuzzed at the edges like the pages of the most-read books, velveted from a history of touch.

“Ah, this is a test.”
“It’s a question,” Abriss said.
“And I taught you that all questions are tests. You think I killed him to rob you of love forever. Why do you care about a measure like genuine, creature who can have anything she desires? I really never understood.”

Events had thrust her back into his proximity. How many perfect events had come together, lives strung like ribbons in a corset that was beginning–ever so slowly–to cinch tight? What would it look like, complete?
Everything for a reason.

“…Limitations give us creativity and room for growth, otherwise everything would be uniform entropy. Existence is a continual movement of creation and destruction: the very two polar points of the Graven trinity you revere. There is no final harmony. No grand unity.”

Time. Time was always Caiden’s enemy–either too compressed or too drawn out. Ten years of monotony, and now he had mere moments to decide what choice was best for the future of the multiverse as an entire concept.

She couldn’t speak even if she’d wanted to. Her thoughts matted around the hard edges of her exhaustion before her mind could construct them into words. And if she’d had those words, they would have stagnated there while the physical apparatus failed to respond. Something always died on its way to speech.

…hands at work were better than a heart at rest.

“Secrets by nature yearn to escape. They beat at the walls inside us. As long as I behave, me being the one and only person with whom he can share secrets makes me too valuable to lose.”

“Deep down, Caiden, we all just want to be seen, without others’ context pressed on us.”

Abriss was throwing the best of herself away. She would let the future destroy her before she ever had a chance to live in the present.

I am Abriss Cetre of the Seventh Primal Etheric Line of the Dynast Lineage, daughter of the dead, and mother of the future. The Graven are imagining through me.

But one could not deny they were elegant, and beautiful, and as terrifying as the unknown had always terrified the living.

It was her aim, after all, to join dimensions and transform the very concept of death.

The path of life shall lead upwards for you.
A difference, to be a difference, must make a difference.
Even the greatest of whales is helpless in the middle of a desert.
More Fortunes >