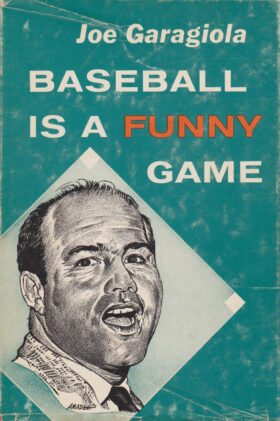 Baseball is a Funny Game

Synopsis: “The book is a series of anecdotes contextualized around a framework of the ballpark itself. It explores the game in the clubhouse, in the dugout, between the foul lines, and at meetings on the mound and elsewhere.”

Declassified by Agent Palmer: Capturing the Magic of the ‘Funny Game’ of Baseball

“Gioi, you the fiesta boy what comes from The Hill, witha name witha ends a, e, i, o, getta name in the paper ad no killa somebody.”

Bill Klem, most famous of all umpires, once said there are 154 games in a season and you can find 154 reasons why your team should have won every one of them. Blame luck, the wind, a rock-headed play or the umpire. To this you might add the clubhouse boy who is blamed for almost anything.

The magic words, if you want to sound like the expert; high and tight and low and away. A strategy meeting could very well at times be called a meeting of the Society for Advancement of the High Tight and Low Away.

I have often said that the 1952 Pirates, which lost 112 games, were the only ball club that I knew that had foolproof signs. Nobody ever got our signs. Many of the clubs thought they had them, but we would miss our own signs so much that they could never prove it.

There are standard gags that are always used, such as telling the catcher that he called for the wrong pitch, or telling an infielder to move around before somebody ties a horse to him. Telling the umpire to punch a hole in that mask or to get new batteries for that ouija board he’s using.

The mound has been the birthplace of philosophers.

The mound is no place for martyrs.

George Strickland took a pitch low–at least he thought it was low, but then heard, “Strike two!” He stepped out of the batter’s box and started for the dugout.
“Hey! where are you going? It’s only strike two,” said the umpire.
“I know,” said Strickland. “I brought the wrong club, and I’m going back to get a wedge.”

Nick Altrock, coaching for the Washington Senators, always had an answer for the umpires.. The late Bill McGowan told this one. Several calls had gone against Washington, and Altrock had discussed each one with McGowan. In the sixth inning a foul ball was hit into the stands. McGowan looked back and saw a woman being carried out on a stretcher. He asked Altrock, coaching at third, if the ball had hit her.
In a voice loud enough to be heard in the next county, Nick yelled, “No! You called the last one right, and she fainted.”

The big job of Mrs. Baseball Player is being housewife and mother in a life that is more topsy-turvy than most. The baseball wife has to be a combination cook, waitress, house detective, and secretary with an “Open 24 Hours a Day” sign hung around her neck.

To make the field playable and beautiful is the job; to help the club pick up extra games is the profession.

Almost everything about baseball is measured or recorded.

The Philadelphia fan is the worst fan in the league. This will upset the true-blue Phillie fans, but the feeling the players have is that the fans there learn to say boo as their first word. They have the loudest grandstand jockeys. Though it be the City of Brotherly Love, the loudest boo birds are perched in Connie Mack Stadium.

Most luncheon clubs have a one-thirty deadline, and you have better be finished (regardless of when you got started) by then. If Moses were to do a repeat with the Ten Commandments at a luncheon meeting, he had better get in all ten by one-thirty, or he would find himself in an empty room.

Baseball gives you every chance to be great. Then it puts every pressure on you to prove that you haven’t got what it takes. IT never takes away the chance, and it never eases up on the pressure.

…people come to the ball games today the way they went to the theater in the days of Sophocles and Aeschylus. The people know what it’s all about, but nobody knows how it’s going to work out this time. In baseball, how can you tell how it’s going to work out when the script for today’s game is always written by those great collaborators, Ability, Pressure, Heart and Luck?

Baseball is a game of race, creed, and color. The race is to first base. The creed is the rules of the game. The color? Well, the home team wears white uniforms, and the visiting team wears gray.

Fame and fortune are coming your way.
Even the greatest of whales is helpless in the middle of a desert.
Today it’s okay to make a few choices by going with your instincts.
More Fortunes >