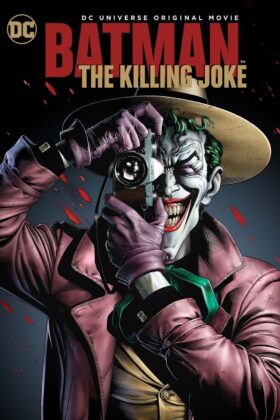 Based On: Based Batman created by Bob Kane and Bill Finger and Alan Moore’s graphic novel

Synopsis: As Batman hunts for the escaped Joker, the Clown Prince of Crime attacks the Gordon family to prove a diabolical point mirroring his own fall into madness.

Declassified by Agent Ellipsis: The Killing Joke: A Journey Into Madness through an R-rated Animated Movie

Batman: You’re not in it like I am, Barbara. It’s still a game for you, it’s still a thrill. You haven’t been taken to the edge yet.
Batgirl: The edge of what?
Batman: The abyss, the place where you don’t care anymore. Where all hope dies. We’re done here. You’re off the case.
Batgirl: No! This isn’t over. You can’t dismiss me with some metaphysical BS. Why are you doing this?
Batman: I told you.
Batgirl: Uh-uh. We’ve been up against worse threats than Paris Franz. This isn’t about me, it’s about us. It’s about you getting protective and sitting in judgment. I won’t have it!
Batman: Then get out.

The Joker: I’m not exactly sure what happened. Sometimes I remember it one way, sometimes another. If I’m going to have a past, I prefer it to be multiple choice! My point is… I Went Crazy! And I’m smart enough to admit it! Why Can’t You?

Batman: I don’t want to hurt you. I don’t want either of us to end up killing the other. But we’re running out of alternatives. Perhaps it all hinges on tonight. I don’t know what it was that bent your life out of shape, but maybe I’ve been there, too. Maybe we could work together. I could rehabilitate you. You don’t need to be alone. We don’t have to kill each other. Let me help you.
The Joker: I’m sorry, but no. No, it’s far too late for that.

The Joker: You know, it’s funny. This reminds me of a joke. See, there were two guys locked in a lunatic asylum and one night… one night, they decided they didn’t like that anymore. They decided to escape. So, they made it up to the roof and there, just across this narrow gap, they see rooftops, stretching across town, stretching to freedom. Now, the first guy, he jumps right across, no problem. But his friend, oh, no way, he’s afraid of falling. So, the first guy has an idea. He says, “Hey, I got this flashlight with me. I’ll shine it across the gap between the buildings and you can walk across the beam and join me.” But the second guy says, “What do you think I am, crazy? You’ll just turn it off when I’m halfway across!”

The Joker: Yes, memory is so treacherous. One moment you’re lost in a carnival of delight, childhood aromas, the flashing neon of puberty, all that sentimental candyfloss. The next, it takes you somewhere you don’t want to be. Somewhere dark and cold, filled with damp, ambiguous-shaped things you’d rather forget. Memories can be vile, repulsive little brutes. Like children, no?

The Joker: Well, that’s what a dose of reality will do to you. It’s why I never touch the stuff. I find it waters down the hallucinations.

The Joker: Why can’t you see the funny side? Why aren’t you laughing?
Batman: Because I’ve heard it before. And it wasn’t funny the first time.

The Joker: Remembering’s dangerous. I find the past such a worrying, anxious place.

Barbara Gordon: First of all, I realize this is probably not how you thought the story would start, not with a big shiny moon or a city that could look stunning in spite of itself… Or me. But I wanted you to know before the horror began, before it all came crashing down, there was a time when capes and cowls and fighting crime really was exciting.

The Joker: By clinging to reality, you’re denying the reality of the situation. I mean do you ever think about how close we’ve come to world war 3 over a flock of geese on a computer screen? Silly goose it’s all a joke everything we valued or struggled for… It’s Monsterous.

Whoever wants to reach a distant goal must take small steps.
Courtesy is the password to safety.
A difference, to be a difference, must make a difference.
More Fortunes >