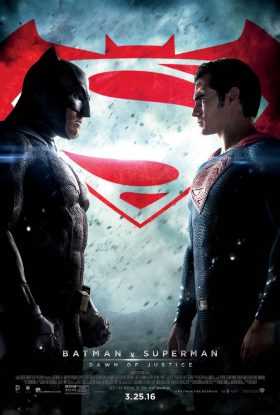 Tagline: Who will win?

Synopsis: Fearing that the actions of Superman are left unchecked, Batman takes on the Man of Steel, while the world wrestles with what kind of a hero it really needs.

“I bet your parents taught you that you mean something, that you’re here for a reason. My parents taught me a different lesson, dying in the gutter for no reason at all… They taught me the world only makes sense if you force it to.” – Batman

“Oh, yes it has, sir. Everything’s changed. Men fall from the sky, the gods hurl thunderbolts, innocents die. That’s how it starts, sir. The fever, the rage, the feeling of powerlessness that turns good men… cruel.” – Alfred

“That should be upside down. We know better now, don’t we? Devils don’t come from hell beneath us. No, they come from the sky.” – Lex Luthor

“Master Wayne, since the age of seven you’ve been into the art of deception like Mozart to the harpsichord, but you’ve never been too hot at lying to me.” – Alfred

Bruce Wayne: You don’t know me, but I’ve known a few women like you.
Diana Prince: Oh, I don’t think you’ve ever known a woman like me.

“The world has been so caught up with what Superman can do that no one has asked what he should do.” – Senator Finch

“See, what we call God depends upon our tribe, Clark Jo, ’cause God is tribal. God takes sides. No man in the sky intervened when I was a boy to deliver me from Daddy’s fist and abominations. I figured out way back if God is all-powerful, He cannot be all good. And if He is all good, then He cannot be all-powerful. And neither can you be.” – Lex Luthor

“You’re not brave… men are brave. You say that you want to help people, but you can’t feel their pain… their mortality… It’s time you learn what it means to be a man.” – Batman

Diana Prince: A hundred years ago I walked away from mankind; from a century of horrors… Men made a world where standing together is impossible.
Bruce Wayne: Men are still good. We fight, we kill, we betray one another, but we can rebuild. We can do better. We will. We have to.

“Men with power obey neither policy nor principle, Miss Lane. No one is different; no one is neutral.” – General Amajagh

Clark Kent: Civil liberties are being trampled on in your city; good people living in fear.
Bruce Wayne: Don’t believe everything you hear, son.
Clark Kent: I’ve seen it, Mr. Wayne. He thinks he’s above the law.
Bruce Wayne: The Daily Planet criticizing those who think they’re above the law is a little hypocritical, wouldn’t you say? Considering every time your hero saves a cat out of a tree, you write a puff piece editorial about an alien who, if he wanted to, could burn the whole place down. There wouldn’t be a damn thing we can do to stop it.
Clark Kent: Most of the world doesn’t share your opinion, Mr. Wayne.
Bruce Wayne: Maybe it’s that Gotham City and me… we just have a bad history with freaks dressed like clowns.

“You know, it’s true what they say about little boys: born with no natural inclination to share.” – Diana Prince

“Boys! Mm, Bruce Wayne meets Clark Kent. Ah, I love it! I love bringing people together! How are we?” – Lex Luthor

Superman: Next time they shine your light in the sky, don’t go to it. The Bat is dead. Bury it. Consider this mercy.
Batman: Tell me. Do you bleed? …You will.

“And now you will fly to him, and you will battle him to the death. Black and blue. Fight night. The greatest gladiator match in the history of the world: God versus man; day versus night; Son of Krypton versus Bat of Gotham!” – Lex Luthor

“There was a time above… a time before… there were perfect things… diamond absolutes. But things fall… things on earth. And what falls… is fallen. In the dream, it took me to the light. A beautiful lie.” – Batman

“Do you know the oldest lie in America, Senator? It’s that power can be innocent.” – Lex Luthor

Clark Kent: It’s like a one man reign of terror. This bat vigilante has been consistently targeting the port and the adjacent projects and tenements, and as far as I can tell the cops are actually helping him.
Perry White: ‘Crime Wave in Gotham’! Other breaking news: ‘Water, wet’!

“We’re talking about a being whose very existence challenges our own sense of priority in the universe. And you go back to Copernicus where he restored the sun in the center of the known universe, displacing Earth. And you get to Darwinian evolution and you find out we’re not special on this earth. We’re just one among other lifeforms. And now we learn that we’re not even special in the entire universe because there is Superman. There he is, an alien among us. We’re not alone.” – Neil deGrasse Tyson

Batman: It’s okay, I’m a friend of your son’s.
Martha Kent: I figured. The cape.

Bruce Wayne: Excuse me, miss. The other night you took something that doesn’t belong to you. Stealing’s not polite.
Diana Prince: Is it stealing if you steal from another thief?

“Ignorance is not the same as innocence.” – General Amajagh

Lois Lane: You’re psychotic.
Lex Luthor: That is a three syllable word for any thought too big for little minds.