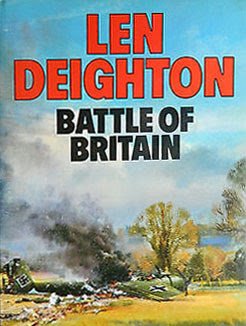 Synopsis: Bringing to bear all his skill as a war historian, novelist and designer, Len Deighton enables the reader to relive the past and experience what it meant to live and die forty years ago when Britain stood alone in the face of tyranny.

Declassified by Agent Palmer: Battle of Britain by Len Deighton is a Brilliant History Book

This book is an attempt to look at the Battle within the context of history, separated from the high-powered propaganda from both sides much of which still distorts current beliefs about what actually happened.

‘Air power has its dreams’, wrote one of the RAF’s foremost public advocates, a civil servant at the Air Ministry named JM Spaight. ‘It knows that its qualities are unique. The armoury of the invincible knight of old held no such weapon as that which it wields. It dreams of victory achieved perhaps by a swift, sudden, overwhelming stroke at the heart and nerve centre of a foe . . . Its mystery is half its power.’

It was an age of innocence. It was fortunate for Britain that with the coming of Sir Edward Ellington as Chief of Air Staff in 1933, and Sir Hugh Dowding as Commander-in-Chief of the newly-created Fighter Command in 1936, men reached the top of the RAF who not only disputed that ‘the bomber would always get through’, but also understood that it was vital to ensure that it did not. They would be only just in time.

Sydney Camm, chief designer of the Hawker company (1925), was born in 1893. He was responsible for the Hawker Hurricane, half-way house between the old biplan and the new Spitfire. (His last work was on what would become the revolutionary jumpjet of the 1970s – the Harrier.) He died in 1966.

Sir Henry Tizard was fishing on the river Wye when he heard of the invasion of Poland. He decided that the traffic and confusion between Shropshire and London would be impossible that day, and returned to the river where he caught several good trout.

‘. . . for the first time for a thousand years this country is now in danger of invasion.’

Churchill wrote of his day of taking office in May, as the German armies swept into France: ‘As I went to bed at about 3am, I was conscious of a profound sense of relief. At last I had the authority to give directions over the whole scene. I felt as if I were walking with destiny, and that all my past life had been but a preparation for this hour and for this trial . . . I thought I knew a good deal about it all, and I was sure I would not fail. . . .’

It is not surprising that almost all the German generals and senior naval officers concerned hoped fervently that they would never be called upon to carry out Sealion.

It id often with hindsight that men realize that they have seen history made. But in the summer of 1940, almost all English men and women vividly perceived that they were acting out one of the great dramas of all time. Many spoke of the dreamlike quality of the period, as every day the impossible took place alongside the humdrum routine of ordinary living. For once, the aristocrat, Harold Nicolson, echoed a general feeling when he wrote in his diary on 31 July: ‘I have always loved England. But now I am in Love with England. What a people! What a chance! The whole of Europe is humiliated except us. And the chance that we shall by our stubbornness give victory to the world.’

The nation’s gold reserves were evacuated to Canada by fast cruiser.

It was very fortunate for the British Government that the Luftwaffe soon removed this by bombing the whole city, including Buckingham Palace and the House of Commons, with equal fierceness.

Once the Battle of Britain began, even with hindsight, it is difficult to fault Dowding’s judgement, above all in pacing his commitment of forces to the battle, never losing sight of the need to be able to fight again tomorrow and the next week, whatever the temptations and the pressures to risk everything on the battle of the moment.

Operations Room, in which girls from the WAAF using croupiers’ rakes moved coloured counters to show the progress of the battle on the map board.

…the Battle of France is over. I expect that the Battle of Britain is about to begin. Upon this battle depends the survival of Christian civilization. Upon it depends our own British life, and the long continuity of our institutions and our Empire. The whole fury and might of the enemy must very soon be turned on us. Hitler knows that he will have to break us in this Island or lose the war. If we can stand up to him, all Europe may be free and the life of the world may move forward into broad, sunlit uplands. But if we fail, then the whole world, including the United States, including all that we have known and cared for, will sink into the abyss of a new Dark Age made more sinister, and perhaps more protracted, by the lights of perverted science. Let us therefore brace ourselves to our duties, and so bear ourselves that, if the British Empire and its Commonwealth last for a thousand years, men will still say, “This was their finest hour.”

It was the men who flew very close and who had the superb judgement to be able to make a killing deflection shot against a target moving at three or four hundred miles an hour in three dimensions, who would be the aces of the Battle of Britain.

…Two further pilots have come to us straight from a Lysander squadron with no experience whatsoever on fighter aircraft. Apparently demand has now outstripped supply and there are no trained pilots available in the Training Units, which means that we will just have to train them ourselves. However it remains to be seen whether we can spare the hours, as we are already short of aircraft for our own operational needs.It seems a funny way to run a war. . .
Sandy Johnstone, 602 Squadron, 3 Sept

‘Our disperal point, with ground crews’ and pilots’ rest rooms, was in a row of villas on the airfield’s western boundary. Invariably I slept there half-clothed to be on the spot if anything happened. In the small hours of 24 August it did. The shrill scream and the deafening crash of bombs shattered my sleep. In the doorway young Worrall, a new arrival, was yelling something and waving his arms. Normally as frightened as anyone, not even bombs could move me then. I placed my pillow reverently over my head and waited for the rest. Worrall still had the energy to be frightened. I was past caring. It was a bad sign; I was more exhausted than I realized.’ – Pete Townsend, 85 Squadron, Croydon.

On Saturday, 7 September, Goering stood on the cliffs at Cap Blanc Nez with Kesselring and Lörzer, watching the great German formations sweep overhead. ‘I myself have taken command of the Luftwaffe’s battle for Britain’, he announced to the German people on the radio. On that day, in response to Bomber Command’s attacks on Berlin, the first major air assault on London took place. Although the capital would now suffer months of punishment from the Luftwaffe, Goering had disastrously lost sight of strategic priorities. The diversion of forces against London was one of the greatest blunders of the battle.

On 17 September, the British intercepted a secret German signal ordering the dismantling of German invasion air transport facilities in Holland. ‘Sealion’ was indefinitely postponed. While fierce air fighting continued by day until October, and night bombing throughout the winter, Dowding’s Fighter Command had essentially achieved its victory, merely by continuing to exist.

6 Make your decision promptly and smartly. It is usually better to act quickly and decisively when attacked or evading, even though your action is not necessarily the best possible.

P/O MacKenzie of 501 Squadron smashed the tail of one German fighter with his wing, having run out of ammunition. The 109 fell in the sea, and MacKenzie lived to tell the tale.

By far the most interesting evidence of popular attitudes is contained in the arches of Mass Observation, an organization set up just before the war by Dr Tom Harrisson, which encouraged hundreds of ordinary people to keep diaries of their daily lives and experiences, and report to MO month by month. Today, the MO reports form the most varied – and uncensored – contemporary testimony about British morale in the war.

Perhaps the most astonishing feature of the Battle of Britain and the revelation of the British people’s ability to withstand bombing is that from 1940 onwards, the British Government set about investing huge resources in its own Bomber Command. Against all logic, it allowed the Royal Air Force to spend most of its resources and the lives of 56 000 aircrew attempting to break the will of the German people in just the way that Fighter Command and the British people had proved could not be done.

It was a beautiful summer night, so warm it was incredible, and made more beautiful than ever by the red glow from the East, where the docks were burning. We stood and stared for a minute, and I tried to fix the scene in my mind, because one day this will be history, and I shall be one of those who actually saw it. I wasn’t frightened any more, it was amazing; maybe it’s because of being out in the open, you feel more in control when you can see what’s happening. The searchlights were beautiful, it’s like watching the end of the world as they swoop from one end of the sky to the other. . . .
A London girl writing to Mass Observation 9 September 1940

There was no role for the civilian. Ordinary people had no idea what they should do.

It required great moral courage as well as strategic judgement for Dowding and Park to fight the Battle of Britain by their brilliant measured strokes. Their refusal to send fighters into the air to meet the great German Bf 109 sweeps over south-east England was a classic display of masterly inactivity. The other inspired move was to order the British fighters to concentrate on shooting down bombers. It did not conform to any of the romantic notions about chivalrous jousts between knights of the air, but it baffled and finally defeated the Luftwaffe.

It is miraculous that the pilots of Fighter Command were able to achieve as much as they did, when their preparation for battle had been inadequate to the point of criminal negligence.

It is certainly true that Fighter Command did not win command of the air over Britain in the summer of 1940 – the Luftwaffe was able to launch harassing raids and night attacks almost with impunity. But Fighter Command achieved victory merely by remaining in existence, and preventing the Germans from gaining the air superiority that they needed either for invasion or for a decisive bomber offensive.

Nothing in the world can take the place of persistence.
Things are turning for the bright side.
Courtesy is the password to safety.
More Fortunes >