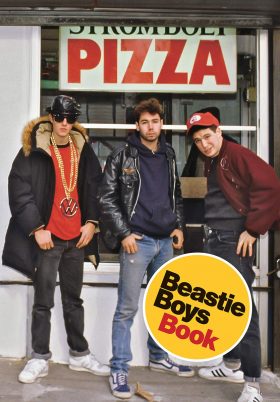 For me, the reason why Beastie Boys stayed together for so long and had so much fun being a band is because Yauch+Mike are family members I wanna see… And all three of us in the end were the friends that inspired one another to go big. So yeah, it sucks that this book about us and our band isn’t coming from all three of our perspectives, but me+Mike will do our best to let you know what happened. – AH

The street itself can function as a mixing deck. If there’s a really strong cut in the wind that week, it will serve as a moving backdrop, apparently always somewhere on the airwaves, while other sounds happen across it like billboards in a car window, o quotes dropped in by a DJ. – Luc Sante

Just repeat the one rhyme you’re sure you caught off the last thing you heard, and without hesitation the guy behind the counter will retrieve it from a case, like magic. – Luc Sante

In the meantime youths continue to start bands, to fuck up, to change names, to change appearances, to change styles. Enormous numbers of them continue to be obsessed with music. Even if music isn’t your gift or your strong suit you are obsessed with music, and even if you are completely incapable of making any music yourself, you want to live inside it. It’s the primary language of our time, the major medium of exchange, the principal commodity. It’s the public face of sex, the legal drug, the emotional prosthetic. It rules and shapes every waking moment of your life. Music is ambient everywhere outside, and it is ambient at all times inside your head. – Luc Sante

And so it is occurring to three young city kids, lately in the punk-rock business, that they can use it to make anthems and stage sketch comedy and arrange pinpoint-precise repartee that wears a stupid hat to conceal its sophistication–and that’s just the beginning. – Luc Sante

I guess every generation of music fans in every city has a moment that, in hindsight, stops time and focuses the energy of everyone in attendance. – Mike D

Some of us were getting our education at the Rat Cage. Important life lessons like financial studies: How are we gonna get enough money to get French fries and gravy from the 2nd Avenue Deli? Technological research consisted of playing video games at Fun n’Burger down the street. – AH

The explosion was on the ground in the yard. Not the fence. Loud noise but no destruction. Adam found the detonator on the street. I twas wood, painted red, and looked like a stage prop. Noel and I never knew it was something that actually worked until the big bang. – Frances Yauch

The thing that’s awesome about being a kid is that there’s never a bigger picture. – AH

You could say we made up for whatever we lacked in skill and experience with hustle and ambition–the ethos of hardcore in a nutshell. – Mike D

Rap, in all its far-reaching ambition, was now It. Our hardcore punk world simply couldn’t compete anymore. How much louder and faster and rulier could bands get? So much of hardcore is about limits–shorter, simpler, more speed, more volume–whereas breakbeats and hip hop are all about the limitless–limitless possibilities, limitless imagination. – MD

The special mix of 1970s granola-Pacifist-philosophy-drenched youngsters sent out to run the Downtown Brooklyn gauntlet, against a backdrop of the vivid, violent, vibrant collapse of NYC’s social and material infrastructure, might be a machine for producing white rappers–or, at the very least, let’s consent that it is a machine for producing teenage ironists of a deep and uncanny variety. – Blake and Jonathan Lethem

In New York it was understood that the Beasties weren’t serious. They weren’t shooting piano players any more than the Ramones had actually beat on brats with baseball bats. – Blake and Jonathan Lethem

Whatever worked. That will always be one of the things that makes me fucking love hip-hop. It’s equal-opportunity. It will take from any person or any source–black, white, Latin, rock, soul, easy listening, jazz, funk, fucking polka–whatever and whomever. By any means necessary. It is all about finding any record that contained two bars of magic. MD

That first visit set the tempo for our interactions with Russell. He charmed us, yelled at some people on the phone, yelled something we couldn’t decipher to Heidi in the front room, talked about how Run-DMC would be the first rap groups on the cover of Rolling Stone and how we would follow behind them and become even bigger. – MD

We showed up, and Linda was super excited to have Little Ricky back for a night. She never stopped offering us all manner of snacks, soup, matzo balls, you name it. Anything that a good Jewish mom could do, she did, embarrassing Rick the whole time. – MD on Rick Rubin’s mom

NYC can be fucking magical in the summertime, especially when you’re nineteen and you’re drunk and you’re in a band. (AH)

It was a tiny place, but it was clean and very grown-up. It had a nice little backyard. (If you’ve never been to NYC, a backyard here means a four-square-foot area that is outside your apartment that is not the sidewalk or a fire escape.) It was the kind of apartment where you’d drink wine from a wineglass. AH

Overnight, we went from being New York famous–maybe the best kind of famous you can be, actually–to being national MTV star-type famous. – MD

It was a red Ferrari–just sayin’. (MD)
I dunno, Mike, I really think it was a Lamborghini. (AH)

Turned out Guns ‘N Roses was there to film the video for “Patience.”

Yes. The Joan Rivers Show. Out of all the talk shows we’ve ever done, Joan Rivers was the best. She came into our little dressing room before the show to meet us. We could hear her coming down the hall screaming, “Who’s from Brooklyn?” She was awesome and hilarious and really nice to us. So there. – AH

Yeah, we never trained as musicians, but we’re going to play like the music we sample, even though that music was played by guys who spent decades learning jazz. You might say it was stoned, arrogant, or straight-up crazy, but you can’t say it wasn’t ambitious. – MD

The Humpty Dance — Digital Underground
Needs no explanation, right? It’s one of the greatest songs ever recorded since the invention of music. – AH

We didn’t know what we were doing, in the best way possible. – MD

We were feeling pretty hesitant about doing vocals, and up to a certain point Check Your Head was entirely instrumental. These karaoke mics were ceremoniously given to us one day by Mario C, who randomly found them in a music store. When he presented them to us, it was like some kind of CGI effect of glistening diamonds and rainbows happened as a heavenly “ahhhh” soundtrack came on. These mics distorted our voices in just the right way, making us instantly comfortable just freestyling, talking mad shit, and whatever. You could just go off, and we sure did. (MD)

You know I’m gonna read this. It’s a little passive-aggressive, don’t you think? And such a drummer thing to say. Oh, that guitar playing is just so simple. Shame on you, Michael. (AH)

Yauch wasn’t going to be told how or what to do by anybody. He was a true original and punk always, and really inspired me to keep that attitude in everything I did no matter what in the world I was in. – Spike Jonze

Hello Nasty is our best record to me also because it was the end of an era. It was the beginning of a new chapter, sure, but after this, things were different… Innocence passed at such a mass and rapid rate that after this there was only looking back . . . at this.. – AH

Douse in about half your bottle of wine (and drink the other half).

First, I would like to second Adam’s depiction here; he gets it right for a change. He is really showing us a compassionate side of himself, and I appreciate that. He really gets me. (MD)

“You know what, I take back what I said earlier. FUCK YOU, ADAM. (MD)

Musicians are magicians and will forever be. – Amy Poehler

If your band is gonna record an all-instrumental record, you should dress accordingly, like jazz cats. – AH

“It drops deep as it does in my breath
I never sleep, ‘cause sleep is the cousin of death.” – Nasty Nas

Who has the prank stamina to hold it back for fifteen years? I’m not only impressed by this, but I am proud to have a friend with such stealth practical, and tactical, joke skills. – AH

Things in life never come full circle. Maybe once or twice they’re hexagonal, but to me they’re almost always misshapen, as if drawn by a toddler in crayon. There’s common threads, sure. – AH

Good clothes open many doors. Go Shopping.
A difference, to be a difference, must make a difference.
Let’s finish this up now, someone is waiting for you on that.
More Fortunes >