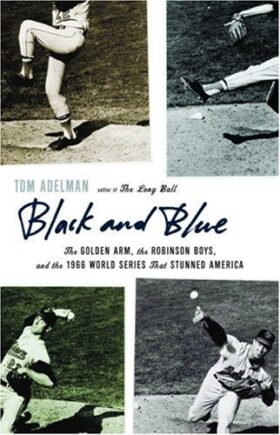 Tagline: The Golden Arm, the Robinson Boys, and the 1966 World Series That Stunned America

Synopsis: The story of the 1966 World Series from both dugouts; the Los Angeles Dodgers versus the Baltimore Orioles.

Declassified by Agent Palmer: Black and Blue is a bruising baseball history of the ’66 World Series

“Sometimes,” Drabowksy said later, “you can point to an incident as the big one in a season. To me, when Frank hit that ball, it galvanized the whole team. It was like, ‘We’re going to be tough to beat this year.’” – on the ball Frank hit completely out of Memorial Stadium

Until the end of the 1960s, this same pattern – rumors, rhetoricians, roadblocks, riflemen, riot police, regrets, recriminations – repeated itself again and again all over the country.

After being traded to Philadelphia, Bunning had insisted that every player should be traded at least once, because it gave him new incentives, showed him new faces, and kept him excited.

With all the painkillers and anti-inflammatories Koufax took, he was, he would later admit, “high half the time during a ballgame.”

In 1966 they became the first team in history to bring in more than 2.5 million fans at home and 2 million on the road. In sheer numbers, the 1966 Dodgers were baseball’s biggest attraction ever.

When Willie [Davis] was late to emerge from the dugout after the inning, one reporter in the press box asked another, “Do you suppose he may be about to commit suicide?”
“Hope not. He might miss and kill and usher.”
“Koufax,” another newsman recommended, “ought to soak Willie’s head with ice today instead of his own elbow.”
“I wonder if Davis will be able to catch the plane to Baltimore,” a third joked.

“A couple of days ago, we told you the Dodgers looked dead,” wrote one Southland sportswriter, by way of breaking the bad news to their fans. “We regret to announce at this time that their condition has deteriorated.”

“Decades are not so clearly defined,” Barry Levinson observed. “‘Sixty-six was a huge transitional period, the beginning of this kind of cultural revolution. All of a sudden, the war became a hot topic. Music began to shift. Drugs start to become more prevalent. Protests began to break out. All these things began to explode.”

Good clothes open many doors. Go Shopping.
A difference, to be a difference, must make a difference.
Today it’s okay to make a few choices by going with your instincts.
More Fortunes >