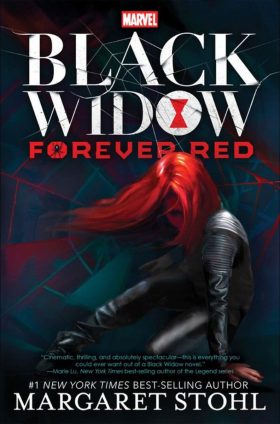 Synopsis: Natasha, Ava, and Alex navigate survival as children start to go missing and a name from Natasha’s past haunts the present and threatens the future.

Declassified by Agent Palmer: Black Widow: Forever Red by Margaret Stohl is a Great Placeholder While We Await Natasha Romanoff’s Lead Role in Her Own MCU Film.

“Love is for children.” – Natasha Romanoff

Lying she was fine with. Lying was a necessity, a tool of her tradecraft. It was being lied to that she hated, even if it was how she had been raised.

She climbed higher as she remembered the words, but even Natasha Romanoff, newly minted agent of S.H.I.E.L.D., former daughter of Mother Russia, couldn’t escape Ivan Somodorov.

Child Natasha had been all eyes and shadows and angles. Alone and defenseless, half the time she felt like a thrashing rabbit caught in a winter trap.

DOD: Agent Romanoff? I want to remind you that you’re under oath.
ROMANOFF: Look, let’s cut the crap, sir. I know what I did, and I know why I’m responsible. If you want to know where things really went south, it all started with Ava and me. IS that what you wanted to hear?

DOD: What I want to hear, Agent, is why.
ROMANOFF: That’s so–American.

(It didn’t seem to matter to Alex that Taylor Swift’s head was pasted on Tony Stark’s body. Taylor Stark was Dante’s longest-running joke.)

Neither girl fit anywhere particular in the world, and they’d gradually made a habit of not fitting in next to each other.

DOD: Tell me, did her Russian and American names give you pause? Considering your history?
ROMANOFF: Every name gives me pause. Considering my history, sir.

This isn’t happening, Ava thought. Also: How many guns can one person keep in their pants?

People trying to kill you. It’s unsettling. But you get used to it.
I did.

Meanwhile, the full-court press that was Tony Stark and Natasha Romanoff (“Half the Avengers,” Natasha had pointed out. “The cute half,” Tony had added.) attacked the ranking brass, lobbying to get access to the Triskeleon’s infamous proprietary mainframe. The double-teaming paid off; there was no resisting the power of a Stark-Romanoff alliance for long.

“The O.P.U.S. project, if these records are right, was Moscow’s push to weaponize quantum entanglement–and then build it. If they got it done, they’ve found what amounts to the legendary lost unicorn of every physics department in the world.”
Natasha shook her head, frustrated. “You know who also said that? Howard Stark, only he was talking about Vita-Rays. Bruce could have said the same thing about gamma radiation. I’m getting pretty tired of unicorns. Could we try to get a regular horse around here for once?”

Natasha, who was incognito in a smooth blond wig and giant black glasses that made her look like some kind of jetlagged Parisian model. Coulson, on her other side, always just looked like Coulson.

And of course, it’s now Scarlett Johansson whom the world sees as Natasha Romanoff, and rightly so. I myself can’t help but see her when I write. Scarlett’s Natasha manages to somehow remain both a flawed human and a force to be reckoned with. Someone who might b e more comfortable saving the world than saving herself but who won’t stop trying to do either. And if you make the mistake of underestimating or belittling or stereotyping her? She’s going to use it against you to take what she needs–and then slam both your head and your expectations against a wall. And oh yeah, she’s a girl.

Today it’s okay to make a few choices by going with your instincts.
Fame and fortune are coming your way.
Your moods signal a period of change.
More Fortunes >