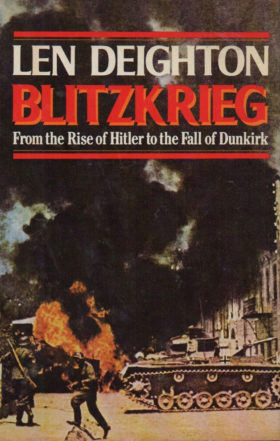 Tagline: From the Rise of Hitler to the Fall of Dunkirk

Synopsis: In Blitzkrieg, Len Deighton applies his encyclopedic knowledge of the leaders, the weaponry, the strategy and the tactics of World War II to the horrendous “blitz” of 1940–Hitler and his generals unleashing a new kind of warfare, characterized by unprecedented coordination of tanks, infantry, and aircraft, and above all, by “lightning” speed: Nazi troops sweeping across a dazed Europe, Poland grabbed in eighteen days, the Maginot Line breached, Franc and the Low Countries subdued, Britain exposed and alone.

Declassified by Agent Palmer: Len Deighton’s Blitzkrieg Is a Classroom in a Book Explaining What Blitzkrieg Is

In modern times, war has usually brought accelerated social change. The Americans who survived the Civil War were different men from the “colonials” who had started fighting it. The Franco-Prussian War of 1870 changed Europeans from farmers into factory workers. But between 1914 and 1918 war changed the world at a pace that made precious history seem leisurely. The growth of literacy, governmental supervision of industry, conscription of men and women, and successful revolution, were each part of the legacy of the First World War. The weapons of that war were also a measure of changing technology, and the effects of this change were as far-reaching as the social changes.

“The desire to perish with honour may well occur to the individual but the responsible statesman must accept that the broad mass of the people has the right soberly to demand to live rather than to die in glory.” – Prince Maximilian, heir to the small provincial Grand Duchy of Baden.

Röhn and Eckart provided Hitler with the keys to power. Hitler himself added energy, intuition, a contempt for the public, and a fluent willingness to tell lies. As he himself was to say, “The receptive capability of the masses is limited, their understanding small. On the other hand they have a great power of forgetting.” Or simply, “When you lie tell big lies . . . in the primitive simplicity of their minds they fall victims to the big lie more readily than to the small lie.

The desire to impose upon the disorder of nature some orderly pattern or arrangement makes men into poets, painters, and gardeners; it also makes them prey to the illusion that a highly organized state will be civilized and preferable to a disorganized and muddled one.

The Germans –like any defeated army–searched their souls to find the reasons for failure.

No man is in a hurry to conclude that the skills and knowledge to which he as devoted a lifetime are obsolete.

“A perfected modern battle plan is like nothing so much as a score for an orchestral composition, where the various arms and units are the instruments, and the tasks they perform are their respective musical phrases. Every individual unit must make its entry precisely at the proper moment, and play its part in the general harmony.”
-Lieutenant General Sir John Monash, Commander Australian Corps, France, 1918

Artfully the War Office put opponents of tanks into the most crucial jobs concerning them.

As will all such theories, these writings were more often used in support of vested interests than as a basis for rational discussion.

Emphasis has already been given to the vital role that radio played in the technique of the blitzkrieg, but this importance was due entirely to the way in which German commanders were prepared to change plans minute by minute in the face of enemy opposition. It is extremely doubtful if such radio contact would have made much difference to the French or the British Army, which was trained to fight systemic set-piece battles.

*Guderian, both in Panzer Leader and in his Inspector General’s report dated 1944, said that only three light divisions fought in Poland. This is an error: six armored divisions and four light divisions fought there. There is also confusion about 10.Pz.Div–one source said it was newly formed after the Polish campaign. In fact, it was the former 4.Panzer Brigade converted to 10.Pz.Div before the war began. To be more precise, there were additional formations fighting in Poland. Some odds and ends of army and SS motorized units added up to about the equivalent of a fifth motorized division. A new SS artillery regiment and an SS reconnaissance battalion were combined with an army tank regiment and the SS Deutschland regiment, a prestigious ceremonial guard unit, to make Panzer Verband Kempf.

It was the First World War that saw the military commanders moving so far back from the battlefront that they were not even in range of artillery fire. As commanders became inured to the terrible meat grinder of battle, so the quality of generalship was reduced to a formula. Seldom was a general asked to thin quickly. Many were never asked to think at all.

For a narrow front nullifies the advantage of strength; two strong men can hold off a battalion of infantry if they are fighting in an office corridor.

“Nothing is more dangerous than seriously to attempt to defend a river by holding the bank opposed to the enemy; for directly he forces a crossing, as he always succeeds in doing, he finds his adversary extended in a thin defensive order, and, therefore, incapable of concentrating his forces.” [Napoleon]

German triumphs in this campaign have caused their military recklessness to be hailed as genius, their dangerous gambles to be thought of as miracles.

For there is no weapon or vehicle of war that is not vulnerable to some other device or warrior.

Today Glaire is still a flat area of vegetable gardens and ramshackle buildings and the rubbish dump of Sedan. The hazards of what must have seemed a long, long walk across this area to the west of Sedan are still obvious to anyone who turns off the highway and wanders down to the Meuse and along it to the big factory on the northeast bank where, that afternoon even as the first assault began, engineers were busy assembling the sections of a pontoon bridge.

The tank, like the Stuka, was more fatal to morale than to men, as neither of these weapons caused significant battlefield casualties, the tank no more than 5 percent of them. It was the idea of the tank that was so effective, and that is why the lightweight PzKw I and PzKw II tanks could prove as effective on the field as the heavier models.

Chéhéry*
*This town is mistakenly called Chémery in Panzer Leader, by Heinz Guderian. Chémery is another town a few miles farther south.

Blitzkrieg was quite different from anything ever experienced in previous wars.

…in war one must not take common sense for granted.

But Reynaud’s cable to President Roosevelt of the United States was less refrained: “What really distinguished, noble, admirable people the Italians are to stab us in the back at this time.”

General Gamelin himself asked, “Why, out of 2,000 modern fighters on hand at the beginning of May 1940, were fewer than 500 used on the northeast front?” Perhaps the answer to that question is contained in the fact that the Commander in Chief was asking it. “We have a right to be astonished,” added Gamelin. We have the right perhaps, but did Gamelin have it?

It was to be expected that those most responsible for France’s agony should devote the most energy to finding excuses and scapegoats.

Sharing little joys offer great hope to others.
Your moods signal a period of change.
Look forward to great fortune and a new lease on life!
More Fortunes >