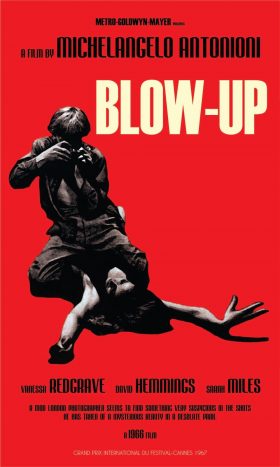 Based On: Inspired by “Las babas del diablo” or “The Devil’s Drool” by Julio Cortázar

Synopsis: A mod London photographer finds something very suspicious in the shots he has taken of a mysterious beauty in a desolate park.

Declassified by Agent Palmer: Blow-Up: Nothing like a little disaster for sorting things out.

“Nothing like a little disaster for sorting things out.” – Thomas

“She isn’t my wife, really. We just have some kids. No, no kids, not even kids. Sometimes, though, it feels as if we had kids. She isn’t beautiful, she’s… easy to live with. No, she isn’t. That’s why I don’t live with her.” – Thomas

“What’s so important about my bloody pictures?” – Thomas

Jane: What are you doing? Stop it! Stop it! Give me those pictures. You can’t photograph people like that.
Thomas: Who says I can’t? I’m only doing my job. Some people are bullfighters, some people are politicians. I’m a photographer.
Jane: This is a public place — everyone has the right to be left in peace.
Thomas: It’s not my fault if there’s no peace. You know, most girls would pay me to photograph them.
Jane: I’ll pay you.
Thomas: I overcharge. There are other things I want on the reel.

Courtesy is the password to safety.
The path of life shall lead upwards for you.
To let another into your heart, first let yourself in.
More Fortunes >