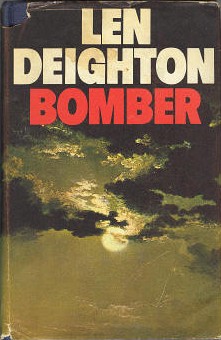 Tagline: Events relating to the last flight of an R.A.F. bomber over Germany on the night of June 31, 1943.

Synopsis: The classic novel of the Second World War that relates in devastating detail the 24-hour story of an allied bombing raid.

Bomber is a novel war. There are no victors, no vanquished. There are simply those who remain alive, and those who die.

Bomber follows the progress of an Allied air raid through a period of twenty-four hours in the summer of 1943. It portrays all the participants in a terrifying drama, both in the air and on the ground, in Britain and in Germany.

In its documentary style, it is unique. In its emotional power it is overwhelming.

Declassified by Agent Palmer: Bomber by Len Deighton is Detailed Historic Fiction of the Highest Caliber.

“… there’s no difference between bankrupting a foreign factory in peacetime and bombing it in wartime. Capitalism is competition and the ultimate form of that is war.”

“I believe that everyone is corruptible and I’m always afraid that I might become corrupt. I believe that all societies are a plot to corrupt the individual.”

“Men are disturbed by any lack of order.”

“You and I might be able to see the virtue of chaos…but dictators gain power by offering pattern, ranks, common purpose and men in formations. Men want order, they strive for it. Even the world’s artists are asked only to impose meaning and symmetry upon the chaos of nature. You and I, Sergeant Lambert, may know that muddle and inefficiency are man’s only hope of freedom but we will not easily convert our fellowmen.”

“There is a common mistake made by historians: to review the past as a series of errors leading to the perfect condition that is the present time. It’s a common mistake in life too, especially in one of our closed societies like a school or a prison camp. It’s easy then to forget that the outside world or future time exist…”

“He’s always wiping his mouth and fingers,” said Beer. “He makes me feel like I’m suffering from some sort of contagious disease.”
“You are,” said Kokke. “It’s called poverty.”

“A creaking door hangs the longest.” Digby christened her Creaking Door. The machine seemed to revel in the name and although she flew like a bird, the tail section did creak a little, especially over the target. Or so swore Flight Sergeant Digby.

For bombers belonged to the ground crew; air crew only borrowed them.

Creaking Door was one of the very first Lancasters ever built. The factory was producing a disastrous two-motor airplane and as an emergency measure the designers asked if they could try putting two extra motors on it. The Air Ministry experts said no, the factory ignored them and begged, borrowed and stole bits and pieces in order to try it anyway.

“That’s how the best bombing plane of the war was designed. What a typical pommy fiasco.”
“I told my father that it was a fine example of British engineering genius,” said Battersby.
“An accident, sport. But she’s a beaut, a real vintage beaut.”

It was going to be a long war and Sweet had decided to spend the great part of it on the staff side: making decisions, formulating plans, forging strategy. These were the things of which wars were made.

“I said it,” said August. “There is but a second of time, a stroke of a pen, a misinterpreted look, a fingered trigger . . . between us and a Knight’s Cross, a court-martial, sainthood or eternal damnation.”

“What do you think, Sam?” he asked.
“It sounds carefully planned,” said Lambert guardedly.
“That’s what they say about contraception,” said Mickey, and he smiled to reveal his gap teeth.

Eventually everyone in the world would become expert at the modest words, kind smiles and bland assurances that gloved the iron hand of ambition.

The previous week there had been a flying film. The hero made love with a sober intensity and flew with drunken abandon (the complete reversal of the activities of the R.A.F. boys).

It was a neurosis of a kind that comes from being asked to do something beyond one’s mental and physical capability. Life had got out of control.

There were many symptoms of this neurosis, and for some survivors it was the beginning of a mental breakdown from which they would never recover.

Only the control tower is in anything like its original condition, although if you ascent the iron staircase be careful. You might end up writing a book about it.

This is perhaps the first book to be entirely recorded on magnetic tape for the I.B.M.721V. This has enabled me to redraft many chapters over twenty times, and by means of memory coding to select certain technical passages at only a moment’s notice.

Let’s finish this up now, someone is waiting for you on that.
Things are turning for the bright side.
A difference, to be a difference, must make a difference.
More Fortunes >