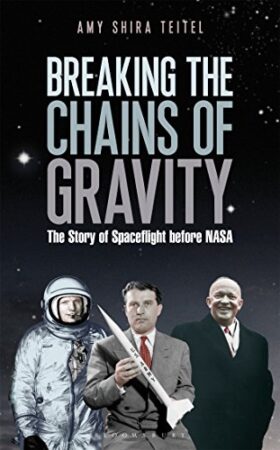 Breaking the Chains of Gravity

Tagline: The Story of Spaceflight before NASA

Synopsis: “The road to NASA and successful spaceflight was paved by fascinating stories and characters. At the end of World War II, Wernher von Braun escaped Nazi Germany and came to America where he began developing missiles for the United States Army. Ten years after he created the V-2 missile, his Jupiter rocket was the only one capable of launching a satellite into orbit. NACA test pilots like Neil Armstrong flew cutting-edge aircraft in the thin upper atmosphere while Air Force pilots rode to the fringes of space in balloons to see how humans handled radiation at high altitude. After the Soviet launch of Sputnik in 1957, getting a man in space suddenly became a national imperative, leading President Dwight D. Eisenhower to pull various pieces together to create the National Aeronautics and Space Administration.”

NASA wasn’t created in a vacuum and suddenly tasked with the Moon landing.

The complete, unedited story would be a tome that only die-hard space fans would have the patience to sift through. Spaceflight is part of our shared human history and shouldn’t be an opus accessible only to initiates. It should be available to everyone interested in exploring this rich history.

Humanity’s exploration of space is wonderful. Having a deeper understanding of how it all started is not only interesting, having a sense of the context makes everything we have achieved in the last half century of space exploration that much more incredible.

Every failed launch brought a new problem to light, and identifiable problems were easier to fix than unidentifiable ones.

The myth that the sound barrier is a physical wall in the sky is rooted in a 1935 sensationalist headline. While giving an interview about high speed flight experiments, British aerodynamicist W. F. Hilton used a graphic representation of air drag on an airfoil, an aerodynamic object designed to generate lift, to explain the challenge of transonic flight to the reporter. Hilton showed on the graph how the density of the air molecules building up against the wing shot upward to create what looked like a wall. The next morning’s headlines coined the term the sound barrier, putting the idea of a physical barrier in the minds of people around the world. Engineers of course knew the sonic wall was just an engineering problem, but it was nevertheless a type of barrier that needed to be broken.

The last half century had been a battle against drag and gravity, slowly developing the streamlined and efficient machines that would fight gravity and carry men off the ground.

Keeping any large technological program a secret risked its being misinterpreted by the Soviet Union as a hidden weapons program, which could in turn see the Soviets develop and advanced secret weapons program of their own. It was imperative to Eisenhower that paranoia not develop into new weapons systems.