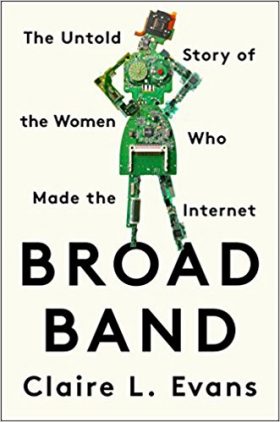 Tagline: The Untold Story of the Women Who Made the Internet

Synopsis: “The history of technology that you probably know is one of men and machines, garages and riches, alpha nerds and brogrammers. But from the first computer programmer in the nineteenth century through the cyberpunk era of the 1990s, female visionaries have always been at the vanguard of tech and innovation. They’ve just been erased from the story—until now.” “This book is about women. It’s also a book about the use of computers, real and potential. This is not to say that men make and women use—far from it—only that the technological history we’re usually told is one about men and machines, ignoring women and the signals they compose.”

Declassified by Agent Palmer: Broad Band: The Untold Story of the Women Who Made the Internet by Claire L. Evans

A teenage girl’s room is a cockpit, an altar, and a womb: it contains her most sacred things, and it holds her as she grows, until eventually it ejects her into the world.

I believed, then, that information, like people, needed support on its journey across the world.

This is a book about women.
It’s also a book about the use of computers, real and potential. This is not to say that men make and women use—far from it—only that the technological history we’re usually told is one about men and machines, ignoring women and the signals they compose.

If you’re looking for women in the history of technology, look first where it makes life better, easier, and more connected. Look for the places where form gives way to function.

History books celebrate the makers of machines, but it’s the users—and those who design for the users—who really change the world.

For close to two hundred years, a computer was a job. As in someone who computes, or performs computations, for a living.

Before the end of the twentieth century, however, computing would become largely the purview of women. It was female mental laborers, breaking intractable problems down into numerical steps much as machines tackle problems today, who ushered in the age of large-scale scientific research.

The Analytical Engine would never be completed, but it represents the conceptual dawn of the computer age. The four components of its design—input, storage, processing, and output—remain core components of all computers today, and the strikingly original notes that Ada prepared to explain this new kind of machine would presage the literature of computer science by nearly a century.

Still, she could have done so much more, and it’s evident that she wanted to. Many brilliant women—born in the wrong centuries, the wrong places, or hoping to make an impact on the wrong field—have suffered similar fates, and far worse.

“Labor is its own reward.” (the Lovelace family motto)

Johnson is often quoted as saying that she was a computer back in the days “when the computer wore a skirt.”

Alone, women were the first computers; together, the formed the first information networks.

Years later, when Grace was an established figure in the new field of computer programming, she’d always assign the hardest jobs to the youngest and least experienced members of her team. She figured they didn’t have the sense to know what was possible.

As historian Jennifer S. Light points out, that claim ignores two essential factors: first, that the “several week’s work” would never have been done by a man in the first place. It would have been done by a female computer working long hours at the Moore School. Second, the claim that ENIAC solved the problem in “exactly fifteen seconds” completely disregards, through ignorance or willful dismissal, the weeks of work, again conducted by women, that went into programming the problem before it was even put on the computer.

Further, the hiring of women to run computers like the ENIAC reflected a long tradition of women as computers themselves, laboring over applied mathematics in university and research settings. Women had been doing the math for as long as anyone could remember.

If computer programming “began as women’s work,” writes historian Nathan Ensmenger, “it had to be made masculine.”

Such is the case with world-changing technologies.
It’s never easy to anticipate what they will become, or just where they will take you.

What she’d given birth to that day was not the cave but the map—not the thing, but its description.

Code is a country populated by the fastidious.

It’s fitting that networked century’s inaugural collective experience would be Adventure. It’s a story about how intimately people influence software, and how wide its impact can be.

Even when women were invisible, it never means they weren’t there.

When information runs smoothly, after all, it can feel as natural as air.

To speed things up, researchers worked rolling twenty-four-hour shifts, running major database updates in the middle of the night, chugging coffee, Coke, and Mountain Dew to make it through to sunrise.

WHOIS does nothing less than keep the Internet democratic, a one policy expert notes.

“The main purpose of the Internet was to push information across it,” Jake says.

People go online for information, they stay for the company. Nobody posts in a void. We share, for better or worse, together.

“The strongest virtual communities are not strictly virtual,” Stacy explains.

The Talmud is a hypertext, with layers of annotations arranged in concentric rectangles around a theological heart. Any text referencing another is considered a form of hypertext: sequels, which begin where the last page of the previous book left off; footnotes; endnotes; marginalia; and parenthetical asides.

It certainly didn’t help that the techno-social activities of Hypertext ’91 featured a tequila fountain in the courtyard outside the hotel. The very moment the World Wide Web was making its American debut, everybody was outside drinking margaritas.

In a 1997 lecture at Southampton, she minced no words. “The web has shown us that global hypertext is possible, but it has also shown us that it is easier to put rubbish on the Net than anything of real and lasting value,” she said. (Wendy Hall)

As the story of hypertext shows, technology alone isn’t enough to change the world—it has to be implemented in an accessible way and adopted by a community of users who feel enough ownership over it to invent new applications beyond the imagination of its architects. To make successful links, in short, we need things worth linking.

“What was fundamentally most fascinating and different about the Internet,” Marissa tells me, “was that people are the medium that you’re working with.”

None of them got rich, and much of what they built has been erased in the slow erosions of the Web, like Word, is walled away from the Web, like Echo, or else is bound to media inaccessible to anyone but digital archivists with the means to replay them, like Jaime’s floppy disk magazines.

This makes their achievements difficult to remember, much as the programs patched by women’s hands in the basement of the war theater a generation previous are difficult to remember, or much as the hypertext systems that could have become important as the Web had they only been implemented on a larger scale are difficult to remember. These all exist in fluid configuration of time, relationships, and clicks. These all exist in relation to the ugliest things in our world: the trajectories of bombs, the frantic pursuit of wealth. But all of their efforts are artifacts, as the Web is a dynamic artifact, an endless conversation writing over itself again and again in the soft echo of the boom.

“We had this big raging debate about: Is the Internet about information or is it about community? And I’m looking at this whole argument, going, duh. Both. At a certain level of intensity in an either/or argument, the fact that it has reached that intensity is the indicator that the right answer is and.”

Computers have no gender, naturally. But the collective social understanding of who computers are for—shifts from generation to generation. In the nineteenth century, computers were actually women, and in the 1950s, they were a woman’s game, until programming was professionalized and masculinized. The ARPANET, built on a technical backbone radiating from military and academic centers, was male dominant because the poeple designing the infrastructure came from environment that favored men. Early hypertext was designed by women on the peripheries of computer science, but it took a man to popularize their ideas—until finally, in the early years of the Web, access to personal computers let women back in, and a generation of femail culture workers and entrepreneurs made their impact yet again. In all that time, the technology has always reflected what was put into it, and by whom.

…the sociologist Sherry Turkle argued that while men generally see computers as a challenge—something to master and dominate—women see computers as tools, objects to be collaborated with. This “soft mastery,” she explained, requires closeness, a connection to computers that’s more like the relationship a musician has with her instrument: intimate, dialogue-driven, relational.

“The Internet was far less regulated, far less commodified,” VNS Matrix’s Francesca da Rimini says. “More of a maul and a maw than a mall. There seemed to be endless possibilities.”

The incorporeal newness that so intoxicated the earliest women online has morphed; it has become what the games critic Katherine Cross aptly calls a “Möbius strip of reality and unreality,” in which Internet culture “becomes real when it is convenient and unreal when it is not; real enough to hurt people in, unreal enough to justify doing so.”