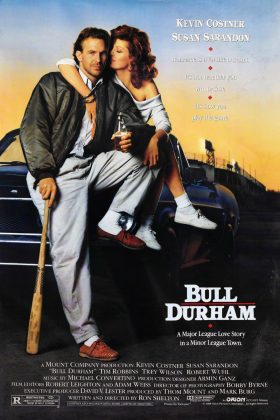 Tagline(s): A Major League Love Story in a Minor League Town
It’s all about sex and sport. What else is there?
Romance is a lot like baseball. It’s not whether you win or lose. It’s how you play the game.
A movie about America’s other favorite pastime

Synopsis: A fan who has an affair with one minor-league baseball player each season meets an up-and-coming pitcher and the experienced catcher assigned to him.

“I believe in the Church of Baseball. I’ve tried all the major religions and most of the minor ones. I’ve worshiped Buddha, Allah, Brahma, Vishnu, Siva, trees, mushrooms, and Isadora Duncan. I know things. For instance, there are 108 beads in a Catholic rosary and there are 108 stitches in a baseball. When I learned that, I gave Jesus a chance. But it just didn’t work out between us. The Lord laid too much guilt on me. I prefer metaphysics to theology. You see, there’s no guilt in baseball, and it’s never boring, which makes it like sex. There’s never been a ballplayer slept with me who didn’t have the best year of his career. Making love is like hitting a baseball: you just gotta relax and concentrate. Besides, I’d never sleep with a player hitting under .250, not unless he had a lot of RBIs and was a great glove man up the middle. You see, there’s a certain amount of life wisdom I give these boys. I can expand their minds. Sometimes when I got a ballplayer alone, I’ll just read Emily Dickinson or Walt Whitman to him, and the guys are so sweet, they always stay and listen. ‘Course, a guy’ll listen to anything if he thinks it’s foreplay. I make them feel confident, and they make me feel safe, and pretty. ‘Course, what I give them lasts a lifetime; what they give me lasts 142 games. Sometimes it seems like a bad trade. But bad trades are part of baseball – now who can forget Frank Robinson for Milt Pappas, for God’s sake? It’s a long season and you gotta trust it. I’ve tried ’em all, I really have, and the only church that truly feeds the soul, day in, day out, is the Church of Baseball.” – Annie

“Well, I believe in the soul, the cock, the pussy, the small of a woman’s back, the hanging curve ball, high fiber, good scotch, that the novels of Susan Sontag are self-indulgent, overrated crap. I believe Lee Harvey Oswald acted alone. I believe there ought to be a constitutional amendment outlawing Astroturf and the designated hitter. I believe in the sweet spot, soft-core pornography, opening your presents Christmas morning rather than Christmas Eve and I believe in long, slow, deep, soft, wet kisses that last three days.” – Crash

“Is the modern athlete a pale imitation of the great old warriors? Only Crash Davis stands out this year, begging the question, ‘What are these boys thinking about, ’cause it sure ain’t baseball.‘” – Teddy

“Relax, all right? Don’t try to strike everybody out. Strikeouts are boring! Besides that, they’re fascist. Throw some ground balls – it’s more democratic.” – Crash

Crash: You be cocky and arrogant, even when you’re getting beat. That’s the secret. You gotta play this game with fear and arrogance.
Nuke: Right. Fear and ignorance.
Crash: No. You hayseed. It’s arrogance not ‘ignorance.’

“Baseball may be a religion full of magic, cosmic truth, and the fundamental ontological riddles of our time, but it’s also a job.” – Annie

Larry: Excuse me, but what the hell’s going on out here?
Crash: Well, Nuke’s scared because his eyelids are jammed and his old man’s here. We need a live… is it a live rooster? We need a live rooster to take the curse off Jose’s glove and nobody seems to know what to get Millie or Jimmy for their wedding present. Is that about right? We’re dealing with a lot of shit.
Larry: Okay, well, uh… candlesticks always make a nice gift, and uh, maybe you could find out where she’s registered and maybe a place-setting or maybe a silverware pattern. Okay, let’s get two! Go get ’em.

Annie Savoy: I think probably with my love of four-legged creatures and hooves and everything, that in another lifetime I was probably Catherine the Great, or Francis of Assisi. I’m not sure which one. What do you think?
Crash Davis: How come in former lifetimes, everybody is someone famous?

“The world is made for people who aren’t cursed with self-awareness.” – Annie

“This son of a bitch is throwing a two-hit shutout. He’s shaking me off. You believe that shit? Charlie, here comes the deuce. And when you speak of me, speak well.” – Crash

“I told him that a player on a streak has to respect the streak.” – Crash

“I have been known on occasion to howl at the moon.” – Crash

“Listen, sweetheart, you shouldn’t listen to what a woman says when she’s in the throes of passion. They say the darndest things.” – Annie

“I wouldn’t dig in if I was you. Next one might be at your head. I don’t know where it’s gonna go. Swear to God.” – Crash

“Walt Whitman once said, ‘I see great things in baseball. It’s our game, the American game. It will repair our losses and be a blessing to us.’ You could look it up.” – Annie

“You just got lesson number one: don’t think; it can only hurt the ball club.” – Crash

Fame and fortune are coming your way.
Even a broken clock is right two times a day.
To let another into your heart, first let yourself in.
More Fortunes >