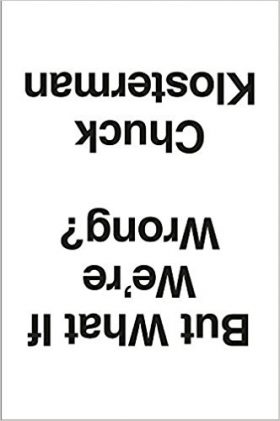 But What If We’re Wrong?

Tagline: Thinking About the Present As If It Were the Past

Synopsis: But What If We’re Wrong? is a book of original, reported, interconnected pieces, which speculates on the likelihood that many universally accepted, deeply ingrained cultural and scientific beliefs will someday seem absurd. Covering a spectrum of objective and subjective topics, the book attempts to visualize present-day society the way it will be viewed in a distant future. Klosterman cites original interviews with a wide variety of thinkers and experts–including George Saunders, David Byrne, Jonathan Lethem, Alex Ross, Kathryn Schulz, Neil deGrasse Tyson, Brian Greene, Junot Diaz, Amanda Petrusich, Ryan Adams, Dan Carlin, Nick Bostrom, and Richard Linklater. Klosterman asks straightforward questions that are profound in their simplicity, and the answers he explores and integrates with his own analysis generate the most thought-provoking and propulsive book of his career.

Declassified by Agent Palmer: A Book Review of But What If We’re Wrong? By Chuck Klosterman

I’ve spent most of my life being wrong.

At this point, my wrongness doesn’t even surprise me. I almost anticipate it.

We live in an age where virtually no content is lost and virtually all content is shared. The sheer amount of information about every current idea makes those concepts difficult to contradict, particularly in a framework where public consensus has become the ultimate arbiter of validity. In other words, we’re starting to behave as if we’ve reached the end of human knowledge. And while that notion is undoubtedly false, the sensation of certitude it generates is paralyzing.

It’s impossible to understand the world of today until today has become tomorrow.

…logic doesn’t work particularly well when applied to the future.

But I’m starting with books, anyway, and mainly for two reasons. The first is that this is a book, so if all books disappear, there’s no way anyone will be able to locate my mistake. The second is that I suspect we will always use the word “book” to signify whatever we incorporate in its place, even if that new thing has almost no relationship to what we consider to be a “book” right now.

[I would love to promise that the rest of this book will not be as pedantic and grinding as the previous two paragraphs. I want to believe I won’t spend thousands of words describing why various nouns won’t evaporate into the cultural troposphere. But I can’t make that promise. It’s entirely possible that–two hundred pages from now–I will find myself describing what “food” is, and explaining that food is what we put in our mouths in order to avoid starvation, and arguing that we will always talk about food as something that exists. But take solace in the fact that you can quit at any time. I cannot.]

The reason something becomes retrospectively significant in a far-flung future is detached from the reason it was significant at the time of its creation–and that’s almost always due to a recalibration of social ideologies that future generations will accept as normative.

(Time is a motherfucker and it’s coming for all of us,” Lethem notes).

Competing modes of discourse no longer “compete.” They coexist.

For the true obsessive, whatever an author doesn’t explicitly explain ends up becoming everything that matters most (and since it’s inevitably the obsessives who keep are alive, they make the rules).

I suspect my whole line of reasoning reads like a collection of ineffectual riddles: “The most amazing writer of this generation is someone you’ve never heard of, representing a subculture we don’t even recognize, expressing ideas that don’t signify what they appear to mean.”

My goal is to think about the present in the same way we think about the past, wholly aware that such mass consideration can’t happen until we reach a future that no longer includes us. And why do I want to do this? Because this is–or should be–why we invest time into thinking about anything that isn’t essential or practical or imperative.

History is a creative process (or as Napoleon Bonaparte once said, “a set of lies agreed upon”).

It’s nice to think that the weirdos get to decide what matters about the past, since it’s the weirdos who care the most.

Conflicting conceptions of “reality” have no impact on reality.

I sometimes think I should have titled this book Aristotle: The Genius Who Was Wrong About Fucking Everything.

Compared to traditional athletics, video game culture is much closer to the (allegedly) enlightened world we (supposedly) want to inhabit.

We inject sports with meaning because they are supposed to mean something.

But different worlds are created all the time, and the world we’re currently building does not reasonable intersect with the darker realities of team sports. We want a pain-free world where everyone is the same, even if they are not. That can’t happen if we’re still keeping score.

The first moment someone calls for revolution is usually the last moment I take them seriously.

The ultimate failure of the United States will probably not derive from the problems we see or the conflicts we wage. It will more likely derive from our uncompromising belief in the things we consider unimpeachable and idealized and beautiful. Because every strength is a weakness, if given enough time.

The importance of any given memory was validated by the fact that someone remembered it at all.

We now have immediate access to all possible facts. Which is almost the same as having none at all.

When you’re a little kid, you feel an almost ethical obligation to root for whoever is best at whatever it is they happen to do; all little kids are bandwagon front-runners.

Sports are among the increasingly rare moments of totally unscripted television.

The future is always impossible.
But, you know, at least we’re used to it.

I’m ready for a new tomorrow, but only if it’s pretty much like yesterday.

Today it’s okay to make a few choices by going with your instincts.
Nothing in the world can take the place of persistence.
Your moods signal a period of change.
More Fortunes >