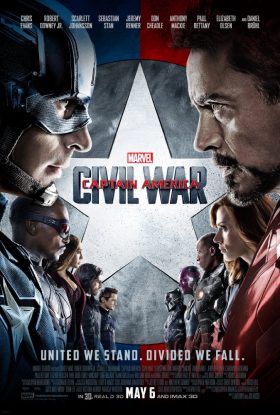 Tagline(s): Divided We Fall
Whose side are you on?
United we stand. Divided we fall

Declassified by Agent Palmer: Captain America: Civil War A Spoiler Free Rant. “Can You Enjoy this in a Vacuum?”

Iron Man: Okay, anybody on our side hiding any shocking and fantastic abilities they’d like to disclose? I’m open to suggestions.

Black Widow: Are we still friends?
Hawkeye: That depends on how hard you hit me.

Ant-Man: Oh, you’re going to have to take this to the shop.
Iron Man: Who’s speaking?
Ant-Man: It’s your conscience. We don’t talk a lot these days.

Hawkeye: I retire for what, like, five minutes, and it all goes to shit.

Tony Stark: That shield doesn’t belong to you. You don’t deserve it! My father made that shield!

Spider-Man: You have a metal arm? That is AWESOME, dude!

Secretary of State Thaddeus Ross: Tell me, Captain, do you know where Thor and Banner are right now? ‘Cause you can bet if I misplaced a couple of 30 megaton warheads, there’d be consequences.

Sam Wilson: I just wanna make sure we consider all our options. The people that shoot at you usually wind up shooting at me.

Steve Rogers: This job… we try to save as many people as we can. Sometimes that doesn’t mean everybody. But if we can’t find a way to live with that, next time… maybe nobody gets saved.

T’Challa: In my culture, death is not the end. It’s more of a stepping off point. You reach out with both hands and Bast and Sekhmet, they lead you into the green veld where… you can run forever.
Natasha Romanoff: That sounds very peaceful.
T’Challa: My father thought so. I am not my father.

Steve Rogers: Tony, I’m glad you’re back at the compound. I don’t like the idea of you rattling around a mansion by yourself. We all need family. The Avengers are yours, maybe more so than mine. I’ve been on my own since I was 18. I never really fit in anywhere, even in the army. My faith’s in people, I guess. Individuals. And I’m happy to say that, for the most part, they haven’t let me down. Which is why I can’t let them down either. Locks can be replaced, but maybe they shouldn’t. I know I hurt you, Tony. I guess I thought by not telling you about your parents I was sparing you, but I can see now that I was really sparing myself, and I’m sorry. Hopefully one day you can understand. I wish we agreed on the Accords, I really do. I know you’re doing what you believe in, and that’s all any of us can do. That’s all any of us should… So no matter what, I promise you, if you need us – if you need me – I’ll be there.

Howard Stark: You know, they say sarcasm is a metric for potential. If that’s true, you’ll be a great man some day.

Zemo: When S.H.I.E.L.D. fell, Black Widow released Hydra files to the public. Millions of pages. Much of it encrypted, not easy to decipher, but… I have experience… and patience. A man can do anything if he has those.

Hawkeye: As much as I hate to admit it, if we’re going to win this fight, some of us might have to lose it.

Miriam: They say there is a correlation between generosity and guilt.

Today it’s okay to make a few choices by going with your instincts.
Whoever wants to reach a distant goal must take small steps.
Things are turning for the bright side.
More Fortunes >