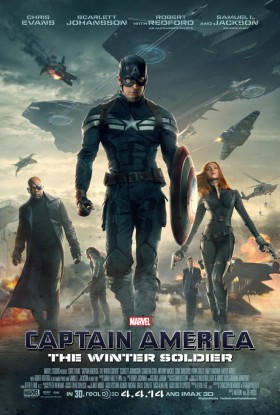 Tagline: In heroes we trust.

Based On: The Marvel comic by Joe Simon and Jack Kirby

Synopsis: As Steve Rogers struggles to embrace his role in the modern world, he teams up with another super soldier, the black widow, to battle a new threat from old history: an assassin known as the Winter Soldier.

Declassified by Agent Palmer: Captain America: The Winter Soldier is a Marvel Masterpiece that ties in amazingly with Agents of S.H.I.E.L.D. [Full of Spoilers]

Steve Rogers: Before we get started, does anyone want to get out?

Natasha Romanoff: After WWII, S.H.I.E.L.D. recruited German scientists with strategic value.
Dr. Arnim Zola: So I could help their cause. I also helped my own.
Steve Rogers: HYDRA died with the Red Skull.
Dr. Arnim Zola: Cut off one head, two more shall take its place.

Steve Rogers: This is it?
Natasha Romanoff: Well, the file came from these coordinates.
Steve Rogers: So did I.

Steve Rogers: Arlim Zola was a German scientist who worked with the Red Skull. He’s been dead for years.
Dr. Arnim Zola: First correction, I am Swiss. Second, look around you, I have never been more alive! In 1972, I received a terminal diagnosis. Science could not save my body. My mind, however, that was worth saving… on two hundred thousand feet of data banks! You are standing in my brain!

Nick Fury: These new long range precision guns can eliminate a thousand hostiles a minute. The satellites can read a terrorist’s DNA before he steps outside his spider hole. We gonna neutralize a lot of threats before they even happen.
Steve Rogers: I thought the punishment usually came *after* the crime.
Nick Fury: We can’t afford to wait that long.
Steve Rogers: Who’s “we”?
Nick Fury: After New York, I convinced the World Security Council we needed a quantum surgeon threat analysis. For once we’re way ahead of the curve.
Steve Rogers: By holding a gun at everyone on Earth and calling it protection.
Nick Fury: You know, I read those SSR files. Greatest generation? You guys did some nasty stuff.
Steve Rogers: Yeah, we compromised. Sometimes in ways that made us not sleep so well. But we did it so the people could be free. This isn’t freedom, this is fear.
Nick Fury: S.H.I.E.L.D. takes the world as it is, not as we’d like to be. And it’s getting damn near past time for you get with that program, Cap.
Steve Rogers: Don’t hold your breath.

Alexander Pierce: Are you ready for the world to see you as you really are? Look out the window, you know how the game works: disorder, war, all it takes is one step.
Steve Rogers: I thought the punishment usually came AFTER the crime.

Brock Rumlow: You’re on the wrong side!
Kate: That depends on where you’re standing.

Natasha Romanoff: Shall we play a game? It’s from a movie that…
Steve Rogers: Yeah, I saw it.

Dr. Arnim Zola: We are both men out of time.

Natasha Romanoff: What about the nurse that lives across the hall from you? She seems kind of nice.
Steve Rogers: Secure the engine room, then find me a date.
Natasha Romanoff: I’m multitasking.

Jasper Sitwell: What do you want?
Sam Wilson: You’re gonna go around the corner to your right. There’s a gray car two spaces down. You and I are gonna take a ride.
Jasper Sitwell: And why would I do that?
Sam Wilson: Because that tie looks really expensive, and I’d hate to mess it up.

Steve Rogers: Attention all S.H.I.E.L.D. agents, this is Steve Rogers. You’re heard a lot about me over the last few days. Some of you were even ordered to hunt me down. But I think it’s time to tell the truth. S.H.I.E.L.D. is not what we thought it was. It’s been taken over by HYDRA. Alexander Pierce is their leader. The S.T.R.I.K.E. and Insight crew are HYDRA as well. I don’t know how many more, but I know they’re in the building. They could be standing right next to you. They almost have what they want. Absolute control. They shot Nick Fury. And it won’t end there. If you launch those helicarriers today, HYDRA will be able to kill anyone that stands in their way. Unless we stop them. I know I’m asking a lot. But the price of freedom is high. It always has been. And it’s a price I’m willing to pay. And if I’m the only one, then so be it. But I’m willing to bet I’m not.
Sam Wilson: Did you write that down first, or was it off the top off your head?

Dr. Arnim Zola: HYDRA was founded on the belief that humanity could not be trusted with its own freedom. What we did not realize was that if you tried to take that freedom, they resist. The war taught us much. Humanity needed to surrender its freedom willingly. After the war, S.H.I.E.L.D. was founded, and I was recruited. The new HYDRA grew, a beautiful parasite inside S.H.I.E.L.D. For 70 years, HYDRA has been secretly feeding crises, reaping war. And when history did not cooperate, history was changed.
Natasha Romanoff: That’s impossible. S.H.I.E.L.D. would’ve stopped you.
Dr. Arnim Zola: Accidents will happen. HYDRA created a world so chaotic that humanity is finally ready to sacrifice its freedom to gain its security. Once the purification process is complete, HYDRA’s New World Order will arise. We won, Captain. Your death amounts to the same as your life, a zero sum!

Baron Wolfgang von Strucker: This isn’t the age of spies. This is not even the age of heroes. This is the age of miracles… and there’s nothing more horrifying than a miracle.

Alexander Pierce: See, I took a seat on the Council not because I wanted to, but because Nick asked me to, because we were both realists. We knew, that despite all diplomacy and the handshaking and the rhetoric, to build a better world sometimes means having to tear the old one down. And that makes enemies.

Nick Fury: Why make me head of SHIELD?
Alexander Pierce: Because you’re the best. And the most ruthless person I ever met.
Nick Fury: I did what I did to protect people.
Alexander Pierce: Our enemies are your enemies, Nick. Disorder, war. It’s just a matter of time before a dirty bomb goes off in Moscow, or an EMP fries Chicago. Diplomacy? Holding action, a band-aid. And you know where I learned that; Bogota. You didn’t ask, you just did what had to be done. I can bring order to the lives of seven billion people by sacrificing twenty million. It’s the next step, Nick, if you have the courage to take it.
Nick Fury: No, I have the courage not to.
Alexander Pierce: You don’t you think we wiped your clearance from the system?
Nick Fury: I know you erased my password. Probably deleted my retinal scan. But if you want to stay ahead of me, Mr. Secretary … you need to keep both eyes open.

Natasha Romanoff: When I first joined SHIELD, I thought it was going straight. But I guess I just traded in the KGB for HYDRA. I thought I knew whose lies I was telling, but… I guess I can’t tell the difference anymore.
Steve Rogers: There’s a chance you might be in the wrong business.

Alexander Pierce: I work forty floors away and it takes a hijacking for you to visit?
Nick Fury: Well, a nuclear war would do it too.

Natasha Romanoff: Going after him is a dead end. I know, I’ve tried. Like you said, he’s a ghost story.
Steve Rogers: Well, let’s find out what the ghost wants.

Nothing in the world can take the place of persistence.
Even the greatest of whales is helpless in the middle of a desert.
Your moods signal a period of change.
More Fortunes >