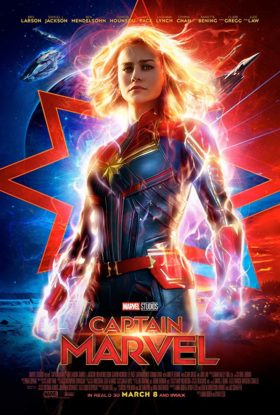 Tagline(s): Discover what makes a HERo.
Higher. Further. Faster.
Everything begins with a HERo.

Based On: Captain Marvel and Carol Danvers by Stan Lee, Gene Colan, and Roy Thomas

Synopsis: Carol Danvers becomes one of the universe’s most powerful heroes when Earth is caught in the middle of a galactic war between two alien races.

Maria Rambeau: You are Carol Danvers. You were the woman on that black box risking her life to do the right thing. My best friend. Who supported me as a mother and a pilot when no one else did. You were smart, and funny, and a huge pain in the ass. And you were the most powerful person I knew, way before you could shoot fire through your fists.

Nick Fury: You know anything about a lady blowing up a Blockbuster? Witnesses say she was dressed for laser tag.

Nick Fury: Space invasion, big car chase… truth be told, I was ready to hang it up. ‘Till I met you today.

Carol Danvers: Does announcing your identity with branded clothing, help with the covert part of the job?
Nick Fury: …said the space soldier who’s wearing a rubber suit.

Nick Fury: I know a renegade soldier when I see one. Never occurred to me that one might come from above.

Nick Fury: We have no idea what other intergalactic threats are out there. And our one woman security force had a prior commitment on the other side of the universe. S.H.I.E.L.D. alone can’t protect us. We need to find more.
Agent Coulson: More weapons?
Nick Fury: More heroes.
Agent Coulson: You think you can find others like her?
Nick Fury: We found her and we weren’t even looking.

Courtesy is the password to safety.
Fame and fortune are coming your way.
Things are turning for the bright side.
More Fortunes >