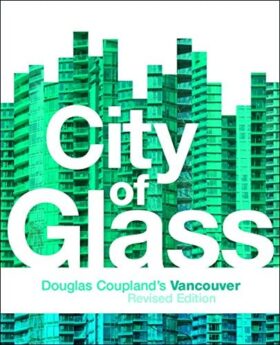 Synopsis: “I get lots of visitors every year, and they always seem to ask the same questions about Vancouver … ‘Why is the number 8 everywhere?’ ‘What’s the deal with pot?’ ‘And what, exactly, is the deal with BC Ferries?’ And so on. People want to know what Vancouver feels like to somebody who lives here – from the inside out. So this book arises from both love and laziness: love, because I spent my twenties scouring the globe thinking there had to be a better city out there, until it dawned on me that Vancouver is the best one going; and laziness, because I thought I was going to go mental explaining dim sum, the sulphur pits and Kitsilano for the umpteen-hundredth time.” – Douglas Coupland

Sometimes back east in Toronto or Ottawa, I hear people say, “Hey, are you going to ‘Van’ this year?”… and I can’t help but shake my head and wonder. In Vancouver there is East Van and North Van and West Van, but never merely Van. Calling Vancouver “Van” is like calling San Francisco “Frisco” or Las Vegas “Vegas.” No–it’s worse than that–it’s like calling Portland “Portl.”

The thing is, Vancouver can neatly morph into just about any North American city save for those in the American Southwest, and possibly Miami. Legend has it that somewhere in the city there exists a mythical prop warehouse filled with nothing but Seattle Post-Intelligencer paper boxes, Denver Broncos billboards and extremely lifelike fake palm trees.

Many of the factors that stripped the innocence away from other cities never occurred here: freeways were never built and a soul-free edge city never arose because Vancouver has no edge. It hits the mountains on one side, the ocean on the other and the U.S. border on the third, so land use has always remained somewhat conservative.

Word of advice: if you have to drive through the border either way, check the radio station to see which crossing has the smallest lineup: AM 730 does so every few minutes. Make the wrong choice of border crossing and you can easily waste up to an hour or two (or three!) in a lineup while others a few kilometres away are zooming through.

…when the Big One comes–and it will come–the whole place will sing into the soil that has liquefied into chocolate pudding, just like San Francsco’s Marina District in 1989… The city has been quietly seismically upgrading its water and bridge systems over the past few years. The city knows.

In recent years this outdoorsy sensibility has interbred with the yoga-based fashion sensibility–light fabris, locking zippers and the city’s key fashion status symbol: thumb holes on the sleeves.

Then there’s the 100-Mile Diet, the first true diet craze of the 21st century, originated in Vancouver. But to call it a craze is wrong–what it is is a quick wake-up slap on the face, calling for people to be less lazy in their approach to food and try to keep it local. Can you eat only food that originates within a hundred miles of your home?

In general, Big is suspect. Vancouver distrusts Big. We don’t want Big. Big is to be fought. The country’s prime minister visits Vancouver as little as possible–and we all know it. During those rare visits, elaborate efforts are made to ensure that the prime minister is neither egged nor ignored. It’s the way that it’s been for all of this city’s life.

Mount Baker is important to the Vancouver psyche in that it stands there, huge, record-breaking and serene, shooting off just enough steam every few years to let us know that if it really wanted to, it could bury us. It’s a metaphor for the United States: seductive but distant, powerful and at least temporarily benign.

The place where you really see this in operation is in Vancouver elevators, which are possibly unique in the world in that their keypads lack floors numbered 4, 13, 14, 24, 34 and 44.

Real estate gets an exclamation mark because it’s Vancouver’s biggest sport, way ahead of skiing and sailing, and is disturbingly central to the civic psyche.

Vancouver is not part of Canada. Not really. There’s a genuine sense of disconnection from the Rest of Canada that we feel here. While Ontario looms large in the minds of most other Canadians, said province simply doesn’t enter our minds from one week to the next.

One interesting new trend in Vancouver is that of Seattle tech firms such as Microsoft opening Canadian branch plants because the U.S. government is unwilling to grant visas to highly trained workers from other countries. Their loss, our gain.

Vancouver is one of the few cities going that are bucking the trend toward homogenization and pasteurized global tastes. It’s a fractal city–a city of no repeats. It’s unique, and it’s my home. So if you’re arriving, welcome; and if you’re on your way out, return again soon, and just think of how good the rain was to your complexion and how green the world truly is.

You are interested in higher education, whether material or spiritual.
Look forward to great fortune and a new lease on life!
Things are turning for the bright side.
More Fortunes >