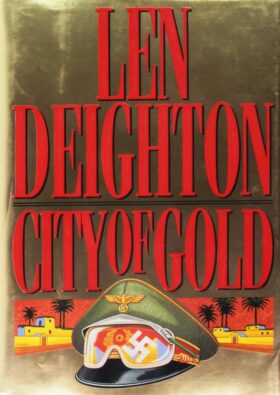 Synopsis: With 1942 Cairo under siege and at the mercy of General Erwin Rommel, British Captain Albert Cutler enters the city to locate the spy that his government is certain Rommel has placed there.

“That’s quite all right,” said Ross. Until that moment he’d firmly intended to leave his quarters that evening and disappear, thanking his lucky stars for preserving him. Now his plans, and indeed his life, changed. He would have to come back to the office tomorrow.
Alice Stanhope was the most beautiful woman he had ever seen. He must see her again, if only just once.

Wartime Cairo was like a beehive, thought Peggy West: a golden beehive frantically active, dribbling with honey, and always ready with a thousand stings.

“…Whatever happens between the German and British armies, we Jews will still have to defend ourselves against the Arabs. To do that we must have guns. Violence is the only language an Arab understands. There will be no negotiations when the day comes. It will be a fight to the death.” – Solomon

Wechsler bent over to sniff at the flowers. “Like I said, there is a big story here: Arab nationalism, British colonialism, the Jewish homeland, and Nazi expansionism. Everybody fighting everybody. I’d say this story could run and run.”

Ross smiled; you got better jokes as a major, as well as better food and lodging.

…Harry Wechsler, who shared his opinions with everyone but his thoughts with no one.

“It’s a silly language,” said Peggy.
“No, it’s the language of Shakespeare and Milton and Wordsworth.”
“Yes. Only the people are silly.”

“That’s the one thing I discovered in my law practice,” said Marker reflectively. “A woman doesn’t need any detectives to help her find her husband.

Whoever wants to reach a distant goal must take small steps.
You are interested in higher education, whether material or spiritual.
Courtesy is the password to safety.
More Fortunes >