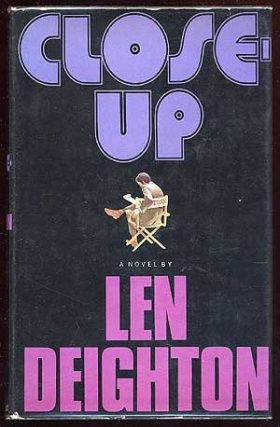 Synopsis: Marshall Stone, international superstar and charismatic member of Hollywood’s elite. Abundantly blessed with charm, genius and wealth, the one gift he most desires – everlasting youth – seems within his grasp when an eminent writer begins the star’s biography. But painful memories and suppressed scandals threaten to expose the fiction of his life.

Dazzled by flattery and numbed by threats, the biographer is caught up in the big-daddy world where books are properties, films are investments, ratings are rigged, and stars and directors are bought and sold like slaves at an auction.

The rituals, the wheeler-dealing politics, and back-stabbing tactics of the richest industry in the world have never been more effectively portrayed. And at the heart of this glittering machine, a brilliant star who will do almost anything to remain untarnished.

Declassified by Agent Palmer: Close-Up by Len Deighton is a Authentic and Timeless Look at the Film World.

In the recent past it has become fashionable for writers to us thinly disguised biographical material about ‘show-business’ figures, nut I have not intended to depict any person, living or dead, or any film, institution or corporation, past or present.

Today we spend eighty per cent of our time making deals and twenty per cent making pictures. – Billy Wilder

He crossed out damned and inserted bloody, hooking the y of ‘you’ with the loop of its b. There should always be at least one alteration in a letter. It gave the personal touch.

It was his desire to be as unsurprising as possible. He succeeded: except to the people who read the fine print in his contracts.

Just as confidence tricksters and scheming women do nothing to conceal their artifice, so Stone used his charm with the abrupt, ruthless and complacent skill with which a mercenary might wield a flame-thrower.

…oh well, espionage and show business have in common the tradition that everyone abandons you when you are in trouble.

I have a washbasin but no shower in my office. Dory [Schary] has a shower but no bathtub. L.B. [Mayer] has a shower and a bathtub. The kind of bath facilities you have in your office is another measure of the worth of your position. – Gottfried Reinhardt

Their only bond was the fealty they demonstrated to Stone, for homage must not only be paid but also be seen to be paid.

I said nothing. The masterful inactivity that is the working method of doctors, interrogators and journalists did not fail me.

There’s some kind of inverse square law that ensures that the richer, more powerful and more independent an actor becomes, so will the scripts he chooses be more feeble.

‘…Motivation is just the perspective.’

…there’s no business but show-business. Everyone liked play-acting if they were given a chance.

He’d never seen Koolman troubled, not by wives, waiters, oceans or earthquakes. He couldn’t imagine Koolman except in full control of his crafty world.

As Edgar had once said, perhaps in fun, publicity shared is publicity halved.

‘…The whole purpose of school is to teach us to put up with boredom, favouritism, discipline and lack of privacy. Parents don’t understand that nowadays: children allowed to run wild will be unhappy children.’

Looking at the accounts for Last Vaquero I found a bill for five hundred plaster cactus plants shipped air freight to New Mexico. The location was full of cactus, so they were not needed, but since they had already filmed some of the plaster ones, they sprayed all the real plants a brighter shade of green to match them. Total cost, sixty-seven thousand dollars, plus two days delay.

‘Actors—and, for all I know, actresses too—obtain this energy from what they call love but what the rest of the world calls praise and admiration.

From Scott Fitzgerald to Joe Kennedy, such Irishmen had brought blarney and enchantment to stir into the shmaltz and the chutzpa that Hollywood already had in abundance.

The ‘big break’ wasn’t the result of exhaustive research, contemplation or years of hard work; it was meeting the right man in the right place at the right moment. Because of the instantaneous result such human mixtures showed, the film world referred to it as chemistry.

Even a broken clock is right two times a day.
Whoever wants to reach a distant goal must take small steps.
Even the greatest of whales is helpless in the middle of a desert.
More Fortunes >