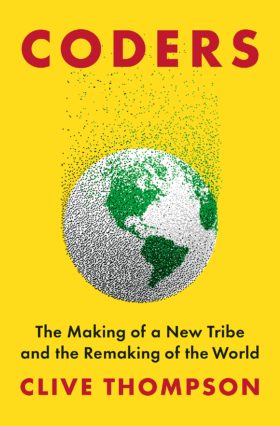 Tagline: The Making of a New Tribe and the Remaking of the World

Synopsis: “In nuanced portraits, Coders takes us close to some of the great programmers of our time, including the creators of Facebook’s News Feed, Instagram, Google’s cutting-edge AI, and more. Speaking to everyone from revered “10X” elites to neophytes, back-end engineers and front-end designers, Thompson explores the distinctive psychology of this vocation–which combines a love of logic, an obsession with efficiency, the joy of puzzle-solving, and a superhuman tolerance for mind-bending frustration.”

Declassified by Agent Palmer: Coders by Clive Thompson is an intriguing glimpse behind the code and into the people writing it

Indeed, you could argue that News Feed eventually became one of the most consequential pieces of computer code written in the last twenty years. Its effects can be seen everywhere, fractally, up and down the patterns of our lives.

Facebook’s feed, by concentrating everyone’s attention into one funnel, also had some unsettling side effects. It created a central point of failure for civic discourse.

So the rule makers have power. Indeed, these days, the founders of high-tech companies–the ones who determine what products get created, what problems get solved, and what constitutes a “problem” in the first place–are increasingly technologists, the folks who cut their teeth writing endless lines of code who cobbled together the prototype for their new firm themselves.

Code giveth, and code can taketh away.

Programming languages are languages, a method of speaking to machines; but to speak to a computer is to speak to the most literal-minded entity on the planet, a ruthlessly prissy grammarian.

Programmers are what I’ve come to think of as “near Sisypheans.” They toil for days in resigned failure, watching the boulder roll back down the hill . . . until one day it abruptly and unexpectedly tips over the crest. And what do they behold on the other side? Another hill.

Most computers’ capacity back then was quite limited; the IBM 704 could handle only about 4,000 “words” of code in its memory. Writing a program was like writing a haiku or a sonnet. A good programmer was concise, elegant, and never wasted a word. They were poets of bits.

If you really want to understand at a high level the way that those who code think, it’s useful to construct, from the ground up, what they actually do all day long. The type of people who get intrigued by the field are the ones who enjoy building, tinkering, playing with logic. But the ones who stay and thrive are the ones who can survive something much more mundane and grinding:

“Users,” he says ruefully, “will find a way.” You might think you’ve stamped out your bugs, but they find new ones. (he = Dave Guarino)

As Michael Lopp, the vice president of engineering at Slack, once noted: “You are punished swiftly for obvious errors. You are punished more subtly for the less obvious ones.”

“The reason a programmer is pedantic,” Atwood says, “is because they work with the ultimate pedant. All this libertarianism, all this ‘meritocracy,’ it comes from the computer. I don’t think it’s actually healthy for people to have that mind-set. It’s an occupational hazard! IT’s why you get the stereotype of the computer programmer who’s being as pedantic as a computer. Not everyone is like this. But on average it’s correct.”

Some of the joys of publishing are the same as the joys of coding. They both have the joy of creation ex nihilo; where there was once nothing, now there is something.

Research by the Harvard professor Teresa M. Amabile and researcher Steven J. Kramer has found that employees are happiest at jobs where they experience “the power of small wins”–regular, daily, visible progress. They hate it when they have only a fuzzy sense of accomplishment. But if, every day, they experience some concrete moment of success, they’re thrilled.

Nobody is more like a stereotypical “coder” than the one you’ve just interrupted.

Computers are useful slaves to time.

Sure, I could have knocked off the task myself manually in a few minutes. But those would have been dull, boring minutes!

A few years later Rosenstein and Pearlman left Facebook; he, to found the workplace-productivity service Asana, and she to found several companies and pursue a new career as an artist. As time went on, they began to regret the side effects of the Like button.

The list of small-person or one-person innovators is long. The first version of Photoshop was created by two brothers, the version of BASIC that launched Microsoft in 1975 was hacked together in weeks by a young Bill Gates, his former schoolmate Paul Allen, and a Harvard freshman Monte Davidof. An early and influential blogging tool, LiveJournal, was written by Brad Fitzpatrick. The breakthrough search algorithm that led to Google was a product of two students, Larry Page and Sergey Brin; YouTube was a trio of coworkers; Snapchat a trio (or, the level of the code, one person, Bobby Murphy). BitTorrent was entirely a creation of Bram Cohen, and Bitcoin was reputedly the work of a lone coder, the pseudonymous “Satoshi Nakmoto.” John Carmack created the 3-D-graphics engine that helped usher in the multi-billion-dollar industry of first person shooter video games.

The reason so few people can have such an outsize impact, Andreessen argues, is that when you’re creating a weird new prototype of an app, the mental castle building is most efficiently done inside one or two isolated brains.

Jointly crafting a piece of crypto or open source code is a common idealistic goal they can all rally around. “Pragmatic judgments often trump ideological ones,” Coleman writes, “leading to situations where, say, an anti-capitalist anarchist might work in partnership with a liberal social democrate without friction or sectarian infighting.”

To work in security is to be faced with the thankless task of constantly and correctly perceiving the bug-eyed danger of the online world, only to have your warnings blithely ignored by the world. You are a prophet howling in the desert, with no one listening.

And this points to some of the enormous challenges that tech companies pose for civic life, as the code they weave changes, inexorable, the way society works–including in ways the creators struggle to foresee.

The lust for scale is also fueled by the dictates of venture capitalists. They place their bets on dozens or hundreds of companies, encouraging them all to grow ferociously. The vast majority won’t, but with luck, one or two will break out–making so much money, so quickly, that it makes up for all the other losses. Venture capital is thus perfectly content to accept an ambitious flameout. It adores a sudden, exploding success. But the one thing it finds useless and annoying is a company that’s merely stable, maybe growing a small bit.

“Before mobile, the internet was bounded in a place, because you could step away from it and close the laptop,” he tells me. “But once it was in your pocket, it was a firehose.”

When scale comes in, human judgment gets pushed out.

Indeed, I’ve often found the worldview of some coders can be like the sociopathic one of economists: Their models might say the economy is doing fine overall, but that’s of little comfort to a particular individual who’s been downsized at age 49 and will never be well paid again. Engineers who build huge systems, like economists with their models, see the world in the aggregate, not in the particular. “One of the dangers of the tech community is that their fixation on data models means that they don’t see the humanity based in them,” says boyd, who today runs the Data & Society think tank.

Historically, many forms of engineering have a culture of focusing heads-down on a technical challenge and rarely looking up to ponder the social implications of their work, as Fred Turner, a communications scholar at Stanford who studies Silicon Valley, told Logic magazine.

One of the things that makes coding weird, as an industry, is that people can teach themselves how to do it.
There aren’t very many technical professions that work this way. Boeing does not employ engineers designing planes who taught themselves–who just sort of fiddled around building Dreamliner jet wings in their backyard, until they, you know, mastered the craft.

“To quote the computer scientist John McCarthy, he said, ‘Everybody needs computer programming. It will be the way we speak to the servants.’”

Even the greatest of whales is helpless in the middle of a desert.
Things are turning for the bright side.
A difference, to be a difference, must make a difference.
More Fortunes >