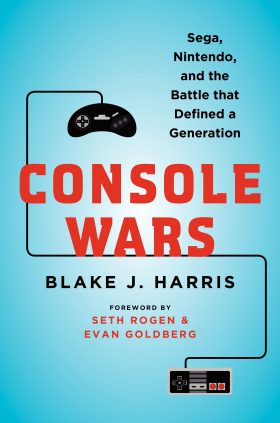 Tagline: Sega, Nintendo, and the Battle That Defined a Generation.

Main Characters: Nintendo & Sega with an appearance by Sony.

Synopsis: In 1990, Nintendo had a virtual monopoly on the video game industry. Sega, on the other hand, was just a faltering arcade company with big aspirations and even bigger personalities. But that would all change with the arrival of Tom Kalinske, a man who knew nothing about videogames and everything about fighting uphill battles. His unconventional tactics, combined with the blood, sweat and bold ideas of his renegade employees, transformed Sega and eventually led to a ruthless David-and-Goliath showdown with rival Nintendo.

The battle was vicious, relentless, and highly profitable, eventually sparking a global corporate war that would be fought on several fronts: from living rooms and schoolyards to boardrooms and Congress. It was a once-in-a-lifetime, no-holds-barred conflict that pitted brother against brother, kid against adult, Sonic against Mario, and the US against Japan.

Based on over two hundred interviews with former Sega and Nintendo employees, Console Wars is the underdog tale of how Kalinske miraculously turned an industry punchline into a market leader. It’s the story of how a humble family man, with an extraordinary imagination and a gift for turning problems into competitive advantages, inspired a team of underdogs to slay a giant and, as a result, birth a $60 billion dollar industry.

Declassified by Agent Palmer: ‘Console Wars’ and How the Revolution was, in fact, Pixelated

Simply put, the videogame industry was nothing more than a modern pixelated version of the Wild West. There were no rules, no code of ethics, and absolutely no law, except for Nintendo’s attempt to appoint themselves sheriff.

It was as if after a decade of conservative politics under Presidents Ronald Regan and George H. W. Bush, Sonic’s combination of speed, attitude, and energy seemed to embody the promise of the 1990s.

“Good,” Kalinske said, and raised his glass, prompting Olafsson and Schulhof to do the same. “To ‘maybe,’ and all the wonderful possibilities that the word may create.”

What Nintendo managed to do in only a few short years made Sega’s decades of success look like a child’s artwork on the refrigerator of life: kind of pretty, but also kind of pitiful. Not only had Nintendo single-handedly revived videogames in the United States, but their utter domination transformed it from a niche industry into big business.

Commerce was a kitchen filled with so many cooks, each of varying competence and inclination, that rarely did a dish fully satisfy the diner’s hunger.

“…There are so many messages out there surrounding videogames that it’s important for me to step forward and present a positive message. Play itself is very rewarding for children. Maybe in some respects there’s a little too much play, but play is still important. And there’s this whole social opportunity, this currency of interaction, with friends, family, and even strangers. That kind of attitude extends beyond the playground, so I was really happy to be expressing that aspect of games.” – Howard Phillips

By hook or by crook (but never by the book), they got the job done, and the instustry was taking notice.

Whereas secret societies in the past have met in lodges, taverns, and dimly lit alleys, this new generation’s meeting spot was the virtual world of videogames. And also unlike the covert gatherings of yesteryear, where furtive glances and secret handshakes were needed to gain entry, the only password into this world was up-up-down-down-left-right-left-right-B-A-start. Playing videogames wasn’t even so much about being good at them as it was about understanding them in a fundamental way that adults never could. For the first time ever, the kid who could never beat his father on the basketball court or beat his mother in an argument now had a place where he could reign supreme.

It’s all about cool; that’s the holy grail. You’re born, you die, and in between you spend a bunch of years search for it–looking cool, sounding cool, buying cool, and, no matter what, not being uncool. That right there, that’s the secret formula. It’s addictive, it’s enlightening, and it’s goddamn recession-proof. In a world full of too many people shouting too many things, it’s the only adjective that really matters: “cool.”

Fischer leaned in. “This is one of my favorite stories. Naka-san gets all the credit, because he designed the game and, you know, he’s this powerful personality, but because of that I think Oshima-san gets lost in the shuffle. So one time I went up to him and asked Sonic’s true creator where that spark of an idea had come from. He’s really shy, this unassuming kid, and I expected him to say something like ‘It was a team effort,’ or ‘It was just one of those things,’ but he smiles really small and he says: ‘I just put Felix the Cat on the body of Mickey Mouse.'”
“Oh, come on,” Kalinske said, “that can’t be true.”
“It is, I swear,” Fischer chortled. “And as shocked as you are to find this out, Oshima-san is more shocked that nobody ever called him out on this.”

And that’s when Nilsen finally realized the fundamental difference between Sega of America and Sega of Japan. They weren’t willing to take the risk, to race Sonic against Mario or welcome a generation to the Next Level. These people were highly talented and certainly not lazy, but deep down they weren’t as interested in winning as they were in not losing.

“Why not? You said it’s a sinking ship.”
“I said it feels like a sinking ship,” Kalinske corrected. “That doesn’t mean things can’t be fixed. Plus, even if the ship sinks, I should be there to go down with it.”
“A martyr?”
“Hardly. I owe it to my company and the employees.”
“How is that not being a martyr?”
Kalinske gave this a moment of consideration. “Because in the videogame industry nobody cares about history. I’ll just be the guy who was there for the fall. No one will remember anything before that.”

The revolution had indeed been pixelated; videogames were not just a fad, no just for kids, but a source of art, story and entertainment for anyone of any age at any time.

Twenty years ago this industry had not existed; ten years ago Kalinske had never thought he’d be a part of it; five years ago Sega was a punchline. That’s just how it goes when the track’s being built while the train is already in motion.

“We’ve broken out to become a whole new category, a whole new culture for that matter. This business resists hard-and-fast rules. It defies conventional wisdom.” Kalinske speaking at the first E3

Even a broken clock is right two times a day.
Whoever wants to reach a distant goal must take small steps.
To let another into your heart, first let yourself in.
More Fortunes >