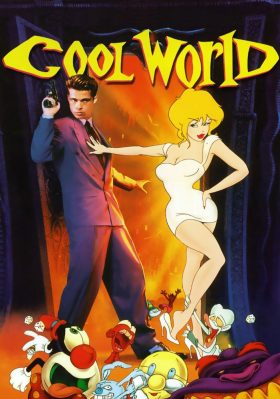 Tagline(s): Cool World is such a dangerous place to be in.
Holli Would if she could …and she will.
There are two different worlds: The Real World and the Wacky, Animated World. Only one of them will survive.

Synopsis: A comic strip femme fatale seeks to seduce her cartoonist creator in order to cross over into the real world.

Declassified by Agent Palmer: Rotospective: Into Ralph Bakshi’s Cool World where we learn to “Be content with the cards you’ve been dealt.”

“Be content with the cards you’ve been dealt.” – Frank Harris

“Noids do not have sex with doodles. Right? Noids do no have sex with doodles! It’s the oldest law in Cool World. I’ve never had to enforce it. You cross that line, I’ll slap you around and make you piss like a puppy. Jack, you think she’s got a thing for you, don’t you? That’s sweet. But don’t flatter yourself. She’s a waste of ink. Truth is she’s been after me and every other noid who’s come though here. It’s just that no one’s been insane enough to get involved with her. You keep your pencil in your pocket. Know what I mean?” – Frank Harris

Jack Deebs: I’m a cartoonist. I drew all this. I have visions. I translate this.
Frank Harris: You do nothing, man. This place exists with or without you. You believe me, right? I’m not one of your creations.

“I guess you can’t think and drive at the same time, huh?” – Holli Would

Frank Harris: Baby, you and me, I can’t have that in the real world. I can’t live without you. But I can’t be with you. What do you do, huh? What do you do?
Lonette: Well, we’re just going to have to pretend, then, aren’t we?

Holli Would: You want to know what it is about you that really kicks my ass, Harris?
Frank Harris: How about my foot?

Nails: You are a doodle, you don’t know what you are! Mark my words, girlie-pie! You leave here and it is trouble for you!
Holli Would: I’m leaving, pencil-dick! You just try and stop me!

Harris: When your partner gets inked, you do something about it. He was your partner, so you do something.
Lonette: Well, I’m not buying it.
Harris: How about a man’s gotta do what a man’s gotta do.
Lonette: Can’t you use think about me for a minute, Frank? I mean, where does this leave me?
Harris: What are you mad about?
Lonette: I’m mad because you talk about crossing and you don’t even care how it makes me feel!
Harris: I don’t even care? How do you feel?
Lonette: Left out!
Harris: You think I want to go back there? You think I want to go back?
Lonette: Now why wouldn’t you want to go back? That’s real to you, isn’t it?
Harris: Let me tell you something about over there. It hurts over there. It’s lonely over there. It’s a war over there. They got 8 million ways for you to die on and they’re all permanent. This is real for me, this with you. If I want to stay with you, I gotta go back.

Your moods signal a period of change.
Let’s finish this up now, someone is waiting for you on that.
Whoever wants to reach a distant goal must take small steps.
More Fortunes >